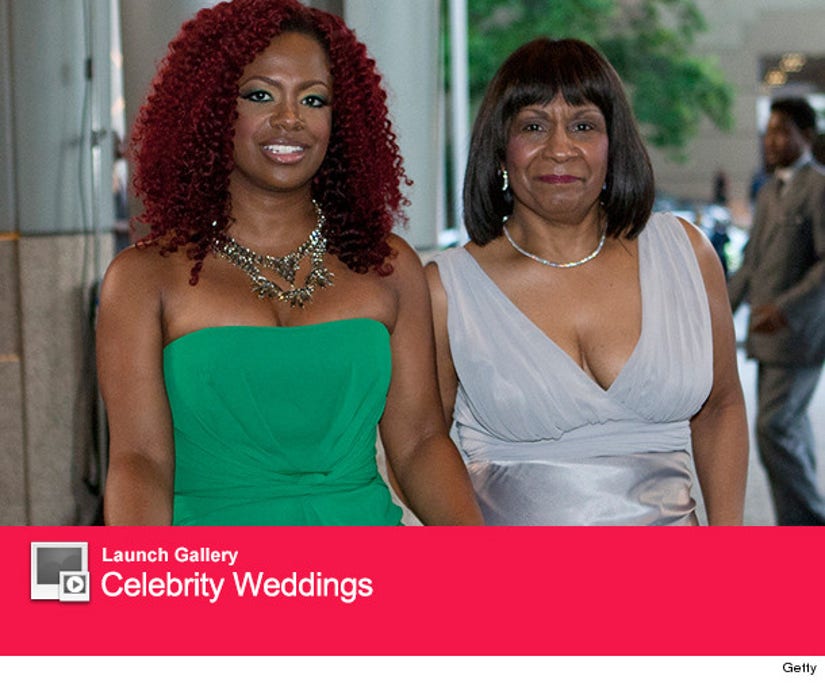 Mama Joyce may have behaved herself, but Kandi Burruss' wedding to Todd Tucker was not a drama-free affair.

In a very revealing (and soundbite-filled) interview with toofab's Brian Particelli, the "Real Housewives of Atlanta" star's mother made it known that her feelings towards her new son-in-law haven't changed ... and there was some last minute prenup drama that really ticked her off.

Anyone who watches the Bravo reality show knows that Kandi's mother and Todd haven't seen eye to eye -- with the protective matriarch accusing him of using her daughter for her money.

And while she voiced her opinion almost every chance she got before the wedding, Mama Joyce says she let Kandi have her special day and didn't speak up when the priest asked if anyone objected to their union.

"I had no reason to bite my tongue," she says. "I'm not gonna be the one to stop her from jumping into the fire. I tried, I did all that ahead of time. Too late for me to pull out of it then, not gonna make a fool outta myself!"

While admitting that the wedding was "beautiful," Joyce still didn't have many positive things to say about Todd.

"It's not about me, whether I'm right or wrong," she continues. "People show you their best when you're dating them, so if she's seeing the best now, the worst is yet to come."

And while this may seem surprising, Mama Joyce tells us she actually made a speech after the ceremony.

"I said, 'She looks very happy. I'm happy that she's happy and I hope that she continues to be happy. I hope she's always as happy as she was last night,'" reveals Joyce.

So ... about that prenup drama.

"I got a little pissed at the bridegroom the night before this wedding," Joyce reveals. "He kind of held up on signing the prenup and didn't come to the rehearsal dinner because he didn't want to sign it."

"His mom said she didn't see no reason for him to have to sign because they were in love. He was the one who didn't have a damn thing, but that's another story," she says. "But from what I understand, he did sign."

So reached out to Kandi's rep for comment, but haven't heard back yet.

Joyce also says she's working on a tell-all book, which will likely include some additional details about Kandi's big day.

"People been asking me about one, so I think I will write one" says Joyce, who is repped by Tara Thomas Agency and recently started a management company of her own.

And while we can't wait to see what secrets she's holding onto, there's one thing Joyce really wants the share with the world: "I can't wait till you see the wedding pictures ... to see how beautiful I was."