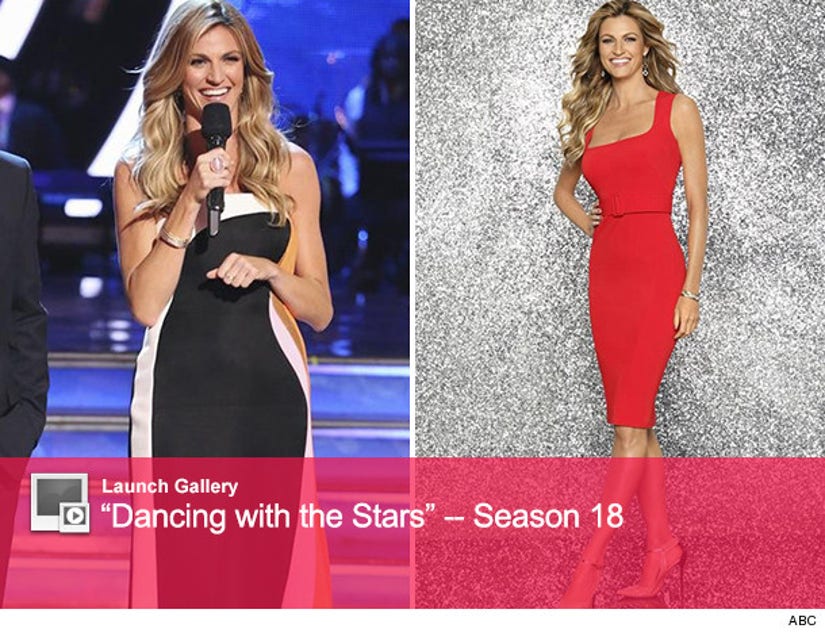 Erin Andrews may not be dancing this time around on "Dancing with the Stars," but she's still staying in shape!

The FOX sports reporter and "DWTS" co-host chatted with toofab's Brittany Kyles, where she opened up about reuniting with her former dancing partner, Maksim Chmerkovskiy, the new shake up this season and a few of her diet secrets.

"It's been awesome," Andrews says of her return to the show. "It's been great to be back in the ballroom and see all the dancers, joke around with everyone in the sky box, it's been a good time."

"Maksim and I have stayed close since we danced in 2009," she tells toofab.

"It's honestly like nothing has changed between the both of us. He's a really big part of my family," she continues. "I am so grateful of my time with him, because it was kind of a rough go for me in that year. It's been wonderful. Again, he is someone that means the world to me, so it's been great seeing him."

While she's loved reuniting with some of her old friends, Erin's also a fan of the partner shake up this season.

"I know that there was a lot of apprehension with everyone, about seeing it and doing it, but I thought it was a great show last week," she says.

Erin also says that she thinks anyone could take the win this year, too. "I think it's going to be very hard. I think everyone has their own strengths and talents. I wouldn't be shocked if anyone took the Mirror Ball Trophy," she reveals.

The 35-year-old also says she hasn't seen any backstage drama.

"Honestly I am away from all of that stuff. Nothing really happens backstage, a lot of the stuff happens at the practice facility but I don't go there anymore," she explains.

"The only backstage drama we've had is to make sure I am fluffed, glossed and the legs are shinning. That's really the only drama that I have had to deal with!"

Well, the FOX reporter has been looking amazing on the show. Aside from her sexy glam routine, Andrews also tries to stay healthy by watching what she eats and exercising.

The Florida native has teamed up with Florida Orange Juice, which she says was a "natural fit."

"100% pure Florida Orange Juice is perfect for me, especially while being on the road and living out of a suitcase. Because look, you're not going to get the best food that you usually have at home or in your fridge, so for me it definitely helps with my energy and get my Vitamin C," she says.

"I really just try to stay healthy. A lot of it is portion control and I try to get my workouts in everyday," she adds.

It's got to be tough maintaining a healthy lifestyle while on the road or when dining out, but Erin says she's found a good balance.

"I work with a lot of big, gorgeous men that play sports and love to eat, so I have to make sure that while I do love dining with those guys, that I don't feel like I have to finish my meal if they finish theirs. So it's really about portion control," she tells us.

Andrews has also given up sweets.

"I used to drink a lot of soft drinks, and you know soda is so fattening, so I try not to do that kind of stuff. I grab some trail mix and maybe a power bar and that's really just what I try to do," she says.

"I'm really big on Physique 57, it's my favorite workout," she adds of her workout routine. "It's the one kind of regimen that helps my body the most."

How do you think the reporter has been doing as a host this season of "Dancing with the Stars"?

Tell toofab in the comment section below and click "Launch Gallery" above to see even more highlights from this season!