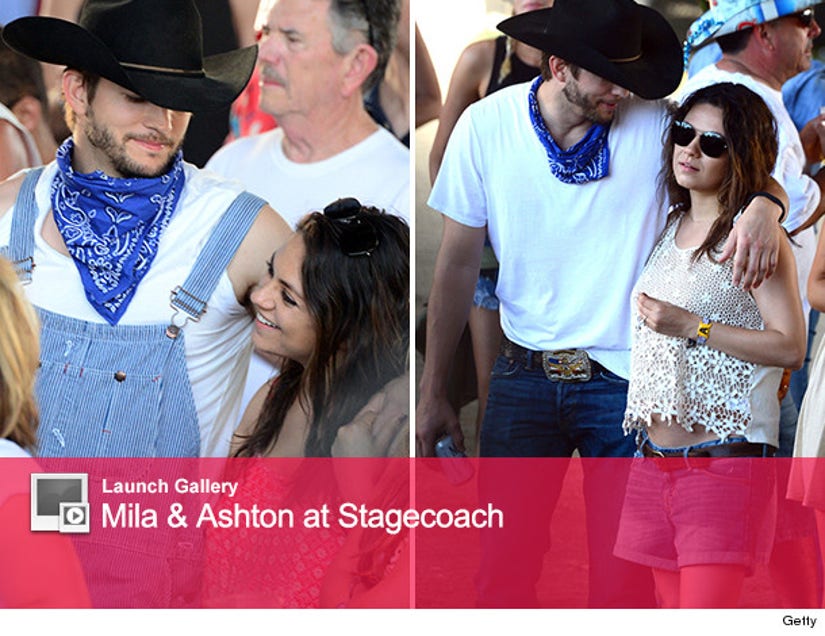 The former "That '70s Show" costars, who are expecting their first child together, were spotted dancing and kissing at the Stagecoach Music Festival in Indio, Calif. on Sunday.

Ashton, who wore a t-shirt and black cowboy hat, also was seen holding onto Kunis' growing belly ... and even dipped her while dancing in the dirt.

The cute couple was on hand to watch Eric Church and Lynyrd Skynyrd perform, but they only had eyes for each other!

The "Jupiter Ascending" actress has yet to comment on her pregnancy. "She is so private she probably won't ever talk about it—at least not publicly," a source recently told E! News. "She and Ashton don't want to share this with the world. They've been like that for their entire relationship."

While Mila and Ashton have stayed mum about her pregnancy, the 30-year-old expecting star knows that she wants to be a "present mom."

"I'm never in the same place for more than two months. How am I ever going to have a family like that? You have to make compromises. If that means I do one movie a year, if people still want to see me and hire me and I don't suck by that point, great" she told Playboy in 2013. "But my only source of happiness can't be dependent on something so fickle. And I find this industry to be incredibly fickle."

We can't wait to see Mila as a mom!

Click "Launch Gallery" above to see more of their incredibly cute candids from the festival.