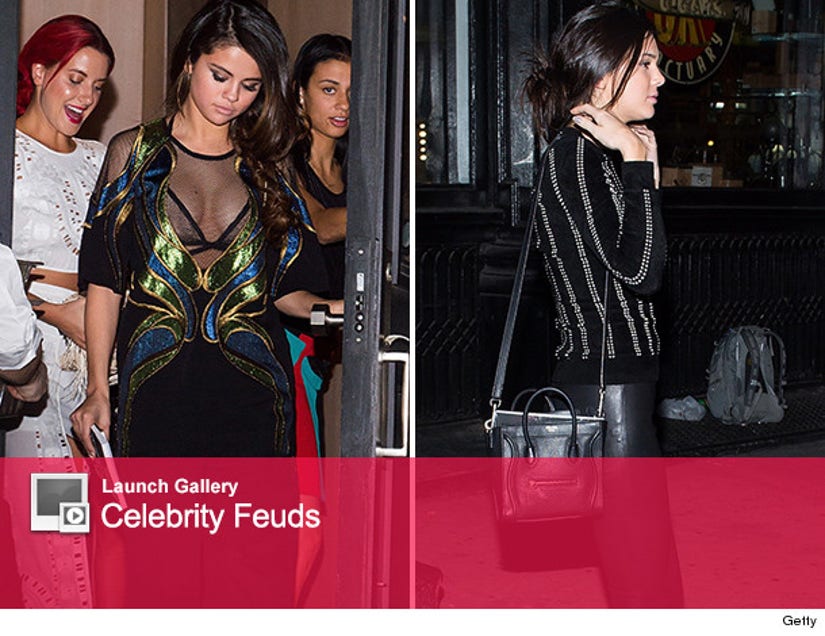 It seems that Selena Gomez has ended her brief feud with Kendall Jenner!

The "Keeping Up with the Kardashians" stars recently had a falling out with the "Come & Get It" singer after Selena thought Kylie got a bit too close to her on-again, off-again boyfriend Justin Bieber at the Coachella Music and Arts Festival.

Both parties also accused the other of being a "bad influence."

While we haven't seen her with Kylie yet, Selena appears to have at least mended fences with Kendall, as the pair was spotted leaving a private dinner party Tuesday night in New York City.

Selena was snapped getting into a taxi, showing a lot of skin in a cleavage-baring top with intricate beading. Kendall opted for a more covered-up ensemble, sporting black leather pants with a black-and-white embroidered sweater.

The Jenners aren't the only stars to reconnect with Gomez. She also seems to have reconciled with her former BFF Taylor Swift.

Selena posted an adorable video on Instagram of herself and T.Swift dancing around during the Met Gala Monday night with Dean Martin's "Volare (Nel Blu Di Pinto Di Blu)" playing in the background.

"And during.. sometimes you wanna just be you with someone who knows all your secrets," Selena captioned the video, which was retweeted by Taylor.

We love to see these ladies back together!

Do you think the fighting is over? Tell toofab in the comment section below, and click "Launch Gallery" above to see more celebrity feuds.