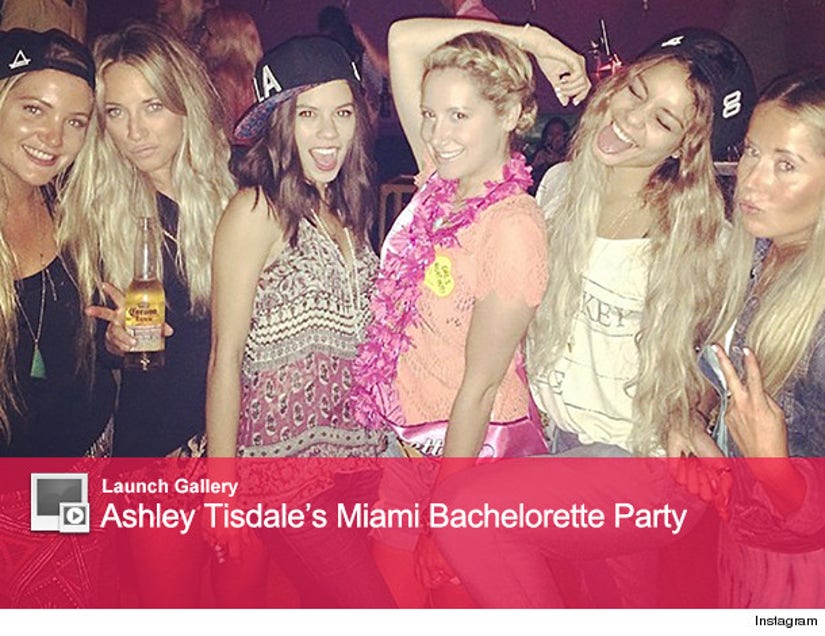 Ashley Tisdale and a group of girlfriends celebrated her upcoming wedding with a fun-filled bachelorette weekend in Miami.

"Off to a very exciting weekend," the actress tweeted on Thursday.

The "High School Musical" alum, who was joined by her costar and BFF Vanessa Hudgens, took to Instagram to share a series of snapshots of the big bash.

The bride-to-be, who got engaged to musician Christopher French last August, was dressed for the occasion – she wore a pink sash emblazoned with the word "Bachelorette" as they headed out for their first night on the town.

Actress Kim Hidalgo, shared a pic of the group along with the caption, "Five blondes and a brunette walk into a bar…" which showed that Tisdale's sash was later accessorized with a hot pink lei.

Actress Shelley Buckner also posted pics from her friend's special weekend, which showed them partying at Live on Friday night.

Saturday was more low-key, as Ashley spent the day sunbathing on a yacht. Some of the girls paddle boarded and rode jet skis while Tisdale and Hudgens stayed on deck. At one point, the group held hands and jumped into the ocean. "We took the plunge," Hidalgo wrote in an Instagram caption.

Tisdale has yet to reveal her wedding date, but plans for the upcoming nuptials are underway. "I have a wedding planner so that's a lot easier," she told E! News last year. "I'm definitely a perfectionist, so I'm definitely involved with certain things that you'd think I'd be relaxed on. I just want it to be perfect."