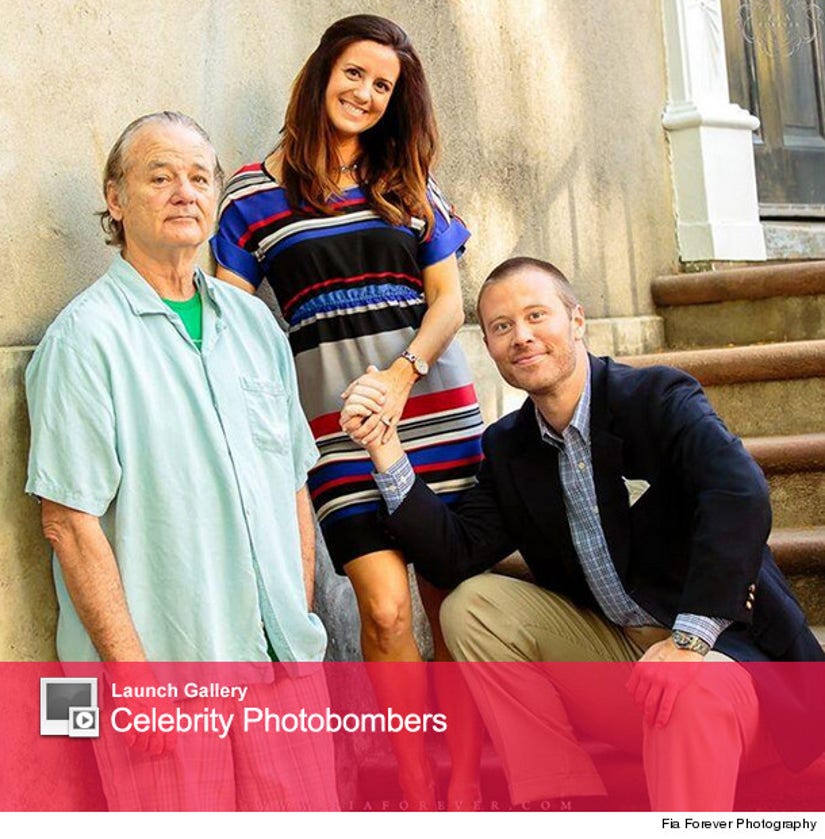 Bill Murray is at it again ...

Ashley Donald and her fiance Erik Rogers were clearly happy for Murray to join in the fun, which was captured by Fia Forever Photography.

Photographer Raheel Gauba told HuffPost Weddings how the fateful encounter went down, saying, "When I set up Ashley and Erik, I saw this look of surprise on their faces as they looked over my shoulder. I asked them to look at the camera, but they just looked stunned and with his eyes, Erik motioned that I better look behind me."

"As I turned around to potentially ask the person distracting them to give us a moment, I see Bill Murray with his shirt up, belly out and patting it—his attempt to make the couple laugh," she added. "I joined the couple in the shock and surprise of the moment. At that point, I invited him to join the couple for a quick shot and he did. So genuine and nice of him to make the couple's day!"

Talk about a fun wedding story!

In case you missed it, Murray crashed a bachelor bash over Memorial Day weekend and took the opportunity to share some sage advice with the groom-to-be.

"If you have someone that you think is The One, don't just sort of think in your ordinary mind, 'Okay, let's pick a date. Let's plan this and make a party and get married,'" he said. "Take that person and travel around the world. Buy a plane ticket for the two of you to travel all around the world, and go to places that are hard to go to and hard to get out of. And if when you come back to JFK, when you land in JFK, and you're still in love with that person, get married at the airport."

The speech is worth watching -- check it out below. Click "Launch Gallery" below to see the best celebrity Photobombers.