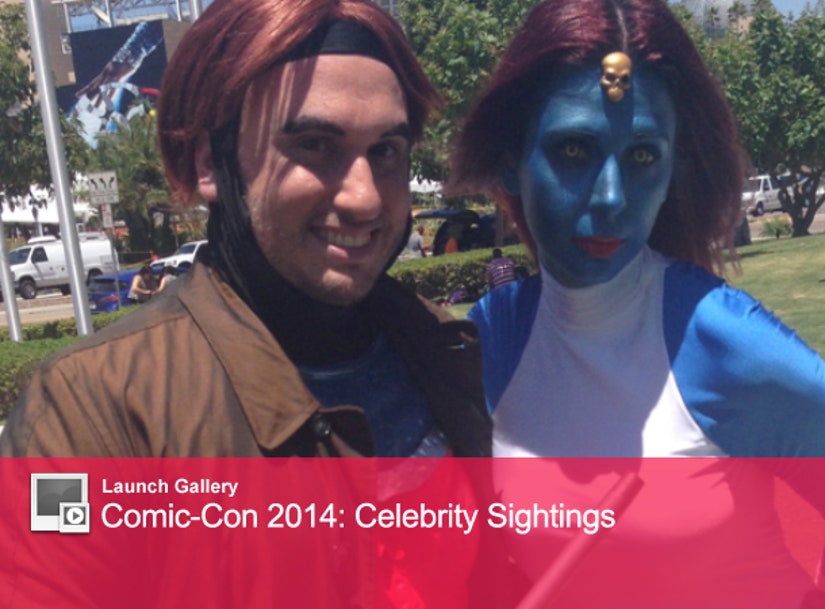 It's a weekend of geeks, nerds, celebs and more Princess Leia slave dresses than any person would EVER need to see. Yep, it's time for Comic-Con!

toofab's Brian Particelli is covering the annual event from the ground this year, and we've got your inside scoop on all the convention floor happenings, hot celeb sightings and big news from all the best panels, press lines and parties.

Keep reading for his first-person perspective from the Con!

Hey everyone, Brian from toofab here, covering my third Comic-Con. With movies like "The Avengers: Age of Ultron" and "Batman v. Superman: Dawn of Justice," TV series like "Arrow," "Teen Wolf" and even TV movies like "Sharknado 2: The Second One" all making big splashes in San Diego this year for their fans, there's A LOT going on.

After a 3 hour drive filled with far too much Britney Spears music from sunny Los Angeles, my cameraman (who is also named Brian) and I arrived in sunny San Diego on Wednesday night.

While there are no panels on Preview night, there was still a ton to see -- and, most importantly, I got the chance to fulfill a lifelong dream of becoming one of the "Teenage Mutant Ninja Turtles." This year, Nickelodeon set up an interactive voice-record booth on the convention floor, where fans can actually go up to the microphone and put your voice in shows like "TMNT," "Rugrats" and "The Legend of Korra."

With Greg Cipes, who voices Michelangelo on the latest series, by my side, here's my attempt at being Donatello:

Yeah, it's clear I shouldn't be a voice actor.

That was the only real event we had lined up, but on the convention floor we saw a lot of reallllly awesome stuff -- including a life-sized Smaug head from "The Hobbit" films, one creepy looking White Walker from "Game of Thrones" and Ben Affleck's Batsuit from the upcoming "Batman v. Superman: Dawn of Justice."

For Thursday, we decided to get in on the cosplay action. Bring on the spandex!

This was my first time ever doing cosplay at a convention -- and it was definitely an interesting experience. I decided to go as Gambit from "X-Men," one of my all time favorite comic characters. The accent, that hair and the kinetic cards -- what's not to like?!

With Cameraman Brian dressed Tuxedo Mask from "Sailor Moon," we walked around the floor trying to find as many X-Men characters as we could possibly find. Along the way we tracked down Beast, Phoenix, Dark Phoenix, Cyclops and even a pair of twin Wolverines.

We'll have that video for you later. For now, there's this:

We got wind of a Marvel vs. Capcom "meetup," where the above photo was taken. It turned into a glorified photo shoot, where everyone from Star-Lord and Rocket from "Guardians of the Galaxy" to a tiny Silver Surfer gathered for a never-ending series of ridiculous poses. It was definitely a huge geek moment -- and totally awesome!

After a shower and outfit change back into civilian clothes, it was off to interview the stars of "Sharknado 2: The Second One."

While Tara Reid was announced to be at both the panel and press room, she was a no show for both. While event organizers told us she was "feeling very ill," the actress was seen going to a Linkin Park concert later that night.

Luckily, we still caught up with Ian Ziering, the vivacious Vivica A. Fox and Judah Friedlander.

Now, you may have missed it, but Tara just gave an interview to GQ where she said a sharknado "actually can happen ... sharks could be stuck in tornados." Of course, I had to bring that up -- and ask them all how they would prepare if Tara's prophecy came true.

"Sharknado 2: The Second One" airs Wednesday, July 10 -- will you be watching?

From there, it was a run across town to the U.S. Grant Hotel for our first of two parties, this one for "Penny Dreadful." The red carpet was a bit of a mess, with a ton of reporters crammed into a tiny space, but we still managed to talk to two of the Showtime series' hot stars: Reeve Carney ("Dorian Gray") and Harry Treadway ("Victor Frankenstein").

Josh Hartnett was in attendance, but he only talked to a few outlets and then went into the party. Wah waaaah.

I did manage to ask Reeve about his surprising sex scene with the former "Faculty" star, who he calls "_________." Check back for that video!

After the carpet died down, we went inside the party, which was drop dead beautiful. And the night's signature drink included a very Victorian touch -- a float of Absinthe.

While this party was pretty tame, the next one was all kinds of ridiculous.

Just around the corner, we went to The Tipsy Crow, where Lifetime held it's "Witches of East End" bash. The dance floor was packed with hot models hired to look like witches and warlocks, red contacts and all, while drinks included one concoction served from a smoky cauldron.

By the time we showed up, show stars Julia Ormond, Jenna Dewan-Tatum, Rachel Boston and Madchen Amick had already left -- but they looked ready for a good time earlier in the night.

After staring at Derek Theler for an hour, we decided it was time to call it a night.