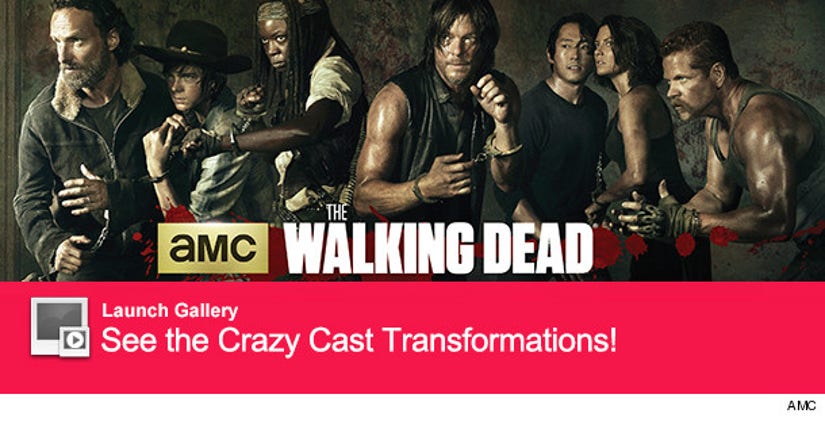 "The Walking Dead" is back and better than ever -- and so are our recaps!

The insanely popular AMC series returned for its Season 5 premiere on Sunday night and it was one explosive hour of television, if not one of the series' best episodes to date. And to get the new season kicked off right, we've enlisted the help of one of the show's stars for our weekly post-show dissection.

The hilarious Josh McDermitt -- who plays mulleted scientist Eugene -- will be joining us every Sunday for a post-mortem, where we'll break down all the moments that made you go "Oh S**t!" and hopefully get some insight into what's to come for Rick Grimes & Co.

If you've got any questions for Josh, be sure to leave them in the comments below. Maybe we'll ask a couple of them next week!

O.K., let's do this. Here are the five things we just had to talk to "Eugene" about! 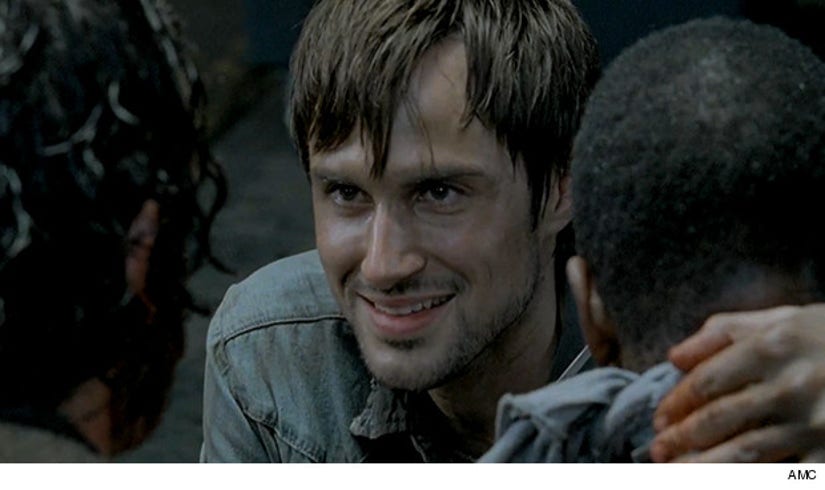 1.) Getting to Know the Terminans

The episode kicks off with a flashback showing Gareth (above) and his people locked inside a train car ... the same car Rick's group was thrown into in the Season 4 finale. From this scene and a few others throughout the premiere, we learn that the Terminans were actually peaceful at one time, but may have been driven to savagery after they were attacked by outsiders.

"I think the interesting thing with this world is even though someone is perceived as an 'evil person,' you can begin to empathize with them because you can see that they weren't always that way," McDermitt says. "The apocalypse has changed people for the good, and changed others for the bad. It's fun to be able to explore that with characters."

As crazy Mary told Carol before her death, "You're the butcher or you're the cattle" -- and it'll be interesting to see where everyone falls on that pretty terrifying spectrum going forward. 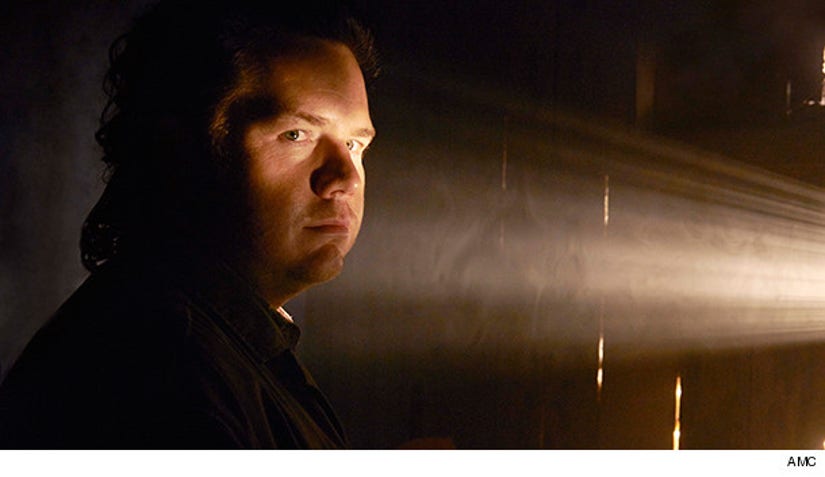 We're used to Rick making the big speeches during this zombie apocalypse -- but tonight, Eugene got his time to shine. Sasha asked the good doctor about the cure he's been talking about since his character was first introduced last season -- and finally, we got to know a little more about the mullet-haired survivor and his mission.

"I was part of a 10 person team at the Human Genome Project that made weaponized diseases to fight weaponized diseases, pathogenic microorganisms with pathogenic microorganisms, fire with fire," he told everyone locked in the train car. "Inter-departmental drinks were had, relationships made and information shared. I'm keenly aware of all the details behind failsafe delivery systems to kill every living person on this planet. I believe with a little tweaking on the terminals in DC, we can flip the script. Take out every last dead one of them."

While some have been dubious of Eugene's motives in the post, this speech sounded legit and solidified some protection from the group.

"That was a tough and very exciting scene to shoot. It was the first thing I shot when we started this season," McDermitt tells toofab. "It was very exciting to be back in the swing of things. But it was also challenging in that I haven't had to work with a group of that size at once since coming onto the show. Being a fan of the show prior to joining, I caught myself looking at Lauren Cohan during the speech and thinking, 'Wow! There's Maggie!'"

"The speech was a necessary thing for Eugene in that moment," Josh continues. "He needed to get the others on his side for protection because as he said, he can't take down a dead one down with 'sharp buttons and hella confidence.'"

It sounds like the mission to DC will be a big storyline this season -- do you think they'll ever make it there? 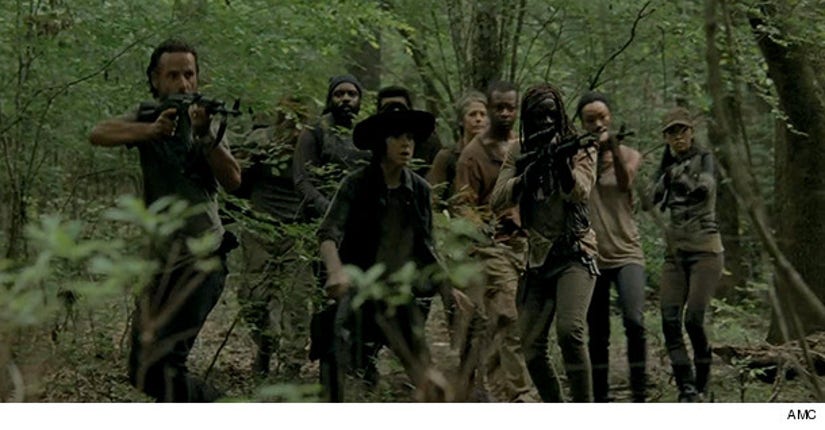 Thanks to Carol's all-around badassery (which included setting off an explosion at Terminus), the gang found their way out of captivity ... and out of getting their throats sliced like those poor souls at the beginning of the episode.

The entire group reunited at a nearby cabin, where Tyreese had just killed a man while protecting Rick's daughter, Judith. The reunion between Rick, Judith and Carl was incredibly moving and a rare moment of joy in a very intense episode.

"It was a great scene. There was definitely a lot of love in the air on set that day," says McDermitt. "Last season everyone was split up and that was difficult for people not being able to work with your friends. It was cool to see Carol reunited with the group at that point and more importantly for Melissa McBride to be back in the mix."

But, despite her incredible rescue, it wasn't enough for Carol to be crowned Josh's ...

From Rick killing two thugs with a shiv to Carol blowing up Terminus with a well-placed firework, there were a lot of impressive acts this week -- but McDermitt is giving the win to something a little more subtle. 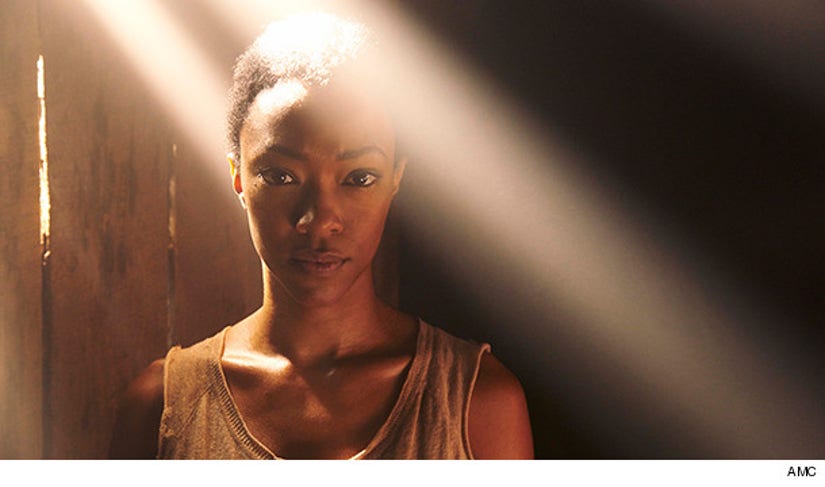 "My badass of the week goes to Sasha (Sonequa Martin-Green) who, when escaping Terminus, sees Eugene in peril from a reaching Walker," he says. "In one quick motion she turns and shoves her handgun in the walkers mouth and blows his brains out. Wow! Truly badass."

Guess that means she's got his back for now!

While the survivors went through hell and back this week, the moment that really made McDermitt go "Oh S**t" actually happened while they were filming.

"When we were escaping and jumping over the fence, we were in such a hurry. The fence we went over wasn't real barbed wire, but it was still very sharp," he says. "The 'Oh s**t!' moment for me was everyone jumping over the fence as quickly as we could and landing on each other on the other side. I am a big dude and I landed squarely on Christian Serratos, who is tiny as can be. She didn't get hurt, thankfully, but I'm sure she would mind if I dropped a few pounds!"

What's your pick? Sound off in the comments below.

Before we go, we'll leave you with a couple stray observations to ponder until next week.

- Yes, that was The Penguin from "Gotham" who got his throat sliced at the top of the episode. Actor Robin Lord Taylor appeared on a Season 4 episode as one half of a couple Rick and Carol encountered during a supply run. While his character's girlfriend got eaten, he mysteriously vanished ... and now we know why.

- Where the heck is Beth?! We now know she's not at Terminus, but is she trapped with the people the Terminans had to fight off? If that's the case, we're not sure what's worse for her!

- Were the Terminans actually eating people? We saw them chopping up bodies, hanging torsos on meat racks and other unspeakable acts ... but nobody actually chowing down on some human ribs. And if there was cannibalism going on, it sure seemed like Gareth was keeping some of the group's brutal practices from the larger population, who may have had no clue what they were eating for dinner.

- And, last but not least, Morgan's back! An after-credits sequence showed Lennie James' character reading Rick's "No Sanctuary" warning and following some tracks through the woods. Think we'll see them reunite later this season? We hope so!

So, what did you think about the premiere? Let us know your thoughts, questions and comments below -- and be sure to come back next week for more with Josh McDermitt!

Be sure to click here for our full "Walking Dead" coverage -- including new interviews with Tyreese and Sasha!