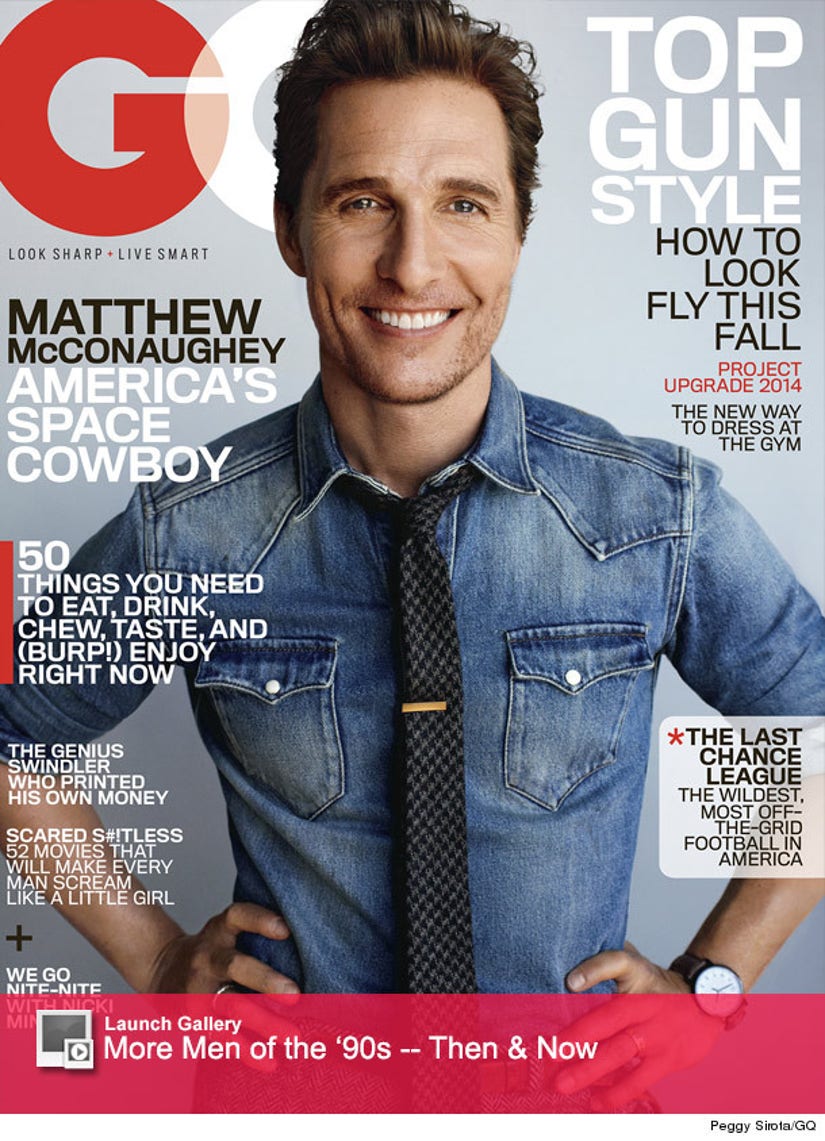 Matthew McConaughey's loving this new chapter of his life!

The "Interstellar" star covers the November issue of GQ where he opens up about being a family man, his love for the Washington Redskins and his friendship with Lance Armstrong.

When it came to settling down and starting a family, the 44-year-old needed an extra push from his now-wife Camila Alves.

"I had to get to the point where I saw it as more than just the thing to do," McConaughey tells GQ about taking the plunge. "I wanted to really want to. You know, I didn't want it to be a destination; the fun is that we're on the adventure together. And look, some of it had to do with her putting it on me. It took her going, 'C'mon, Big Boy, Mr. Easygoing-We'll- Get-to-It-When-We-Get-to-It. Either s**t or get off the pot.'"

The "Dallas Buyers Club" star also admits that fatherhood has been truly been life-changing for him.

"It's the one thing I've always wanted to be. Never is a man more of a man than when he is the father of a newborn. You know what's important. I definitely got more selfish. And at the same time, I think I got more compassionate," he confesses.

The sexy star -- who has also been a longtime fan of the Washington Redskins -- is hoping that the team's name and logo won't change ... despite the on-going legal battles.

"What interests me is how quickly it got pushed into the social consciousness. We were all fine with it since the 1930s, and all of a sudden we go, 'No, gotta change it'? It seems like when the first levee breaks, everybody gets on board," he explains.

"I love the emblem. I dig it. It gives me a little fire and some oomph. But now that it's in the court of public opinion, it's going to change. I wish it wouldn't, but it will."

And when it comes to the "How To Lose A Guy In 10 Days" actor's buff body, Matthew reveals that he doesn't have to do much to stay in shape.

"I have good genes. My dad was an athlete. I got real fortunate with that. I haven't used a weight in three years. Plus ten pounds, minus ten pounds—I can go bam, within a week," he reveals.

McConaughey also gets extremely candid about his current relationship with his former BF and world-famous cyclist.

"I like people who are great at what they do," he tells the mag. "At that time, we were two single men who were doing good in their careers and came from different places."

But Matt doesn't feel like he needs an apology from Lance, even though the cancer advocate was charged with cheating and eventually lost his seven Tour de France titles as a result.

"To put my own emotions in front of this and go 'You didn't tell me the truth' would be arrogant. And you know what? This is a friend. Who I know to be a good man. If there was an apology, it was said and I heard it," he says.

It definitely sounds like Matt has a great outlook on life -- what do you think about the Oscar winner's candid comments? Sound off below and click "Launch Gallery" above to see even more men of the '90s!