Marvel pulled an Apple today, with a giant press conference shrouded in mystery.

Ever since it was announced on Friday, both press and fans speculated about what exactly would be announced during the event -- and some of them were right.

toofab's Brian Particelli was inside the El Capitan for the presentation, where new characters were introduced and some epic "Avengers" news was announced. Keep reading for the upcoming slate!

The film, opening May 6, 2016, will pit Steve Rogers against Tony Stark, as they battle over how to regulate super-humans now that S.H.I.E.L.D. is dunzo. The film will also feature the first appearance of a new superhero to the Marvel cinematic universe, Black Panther. 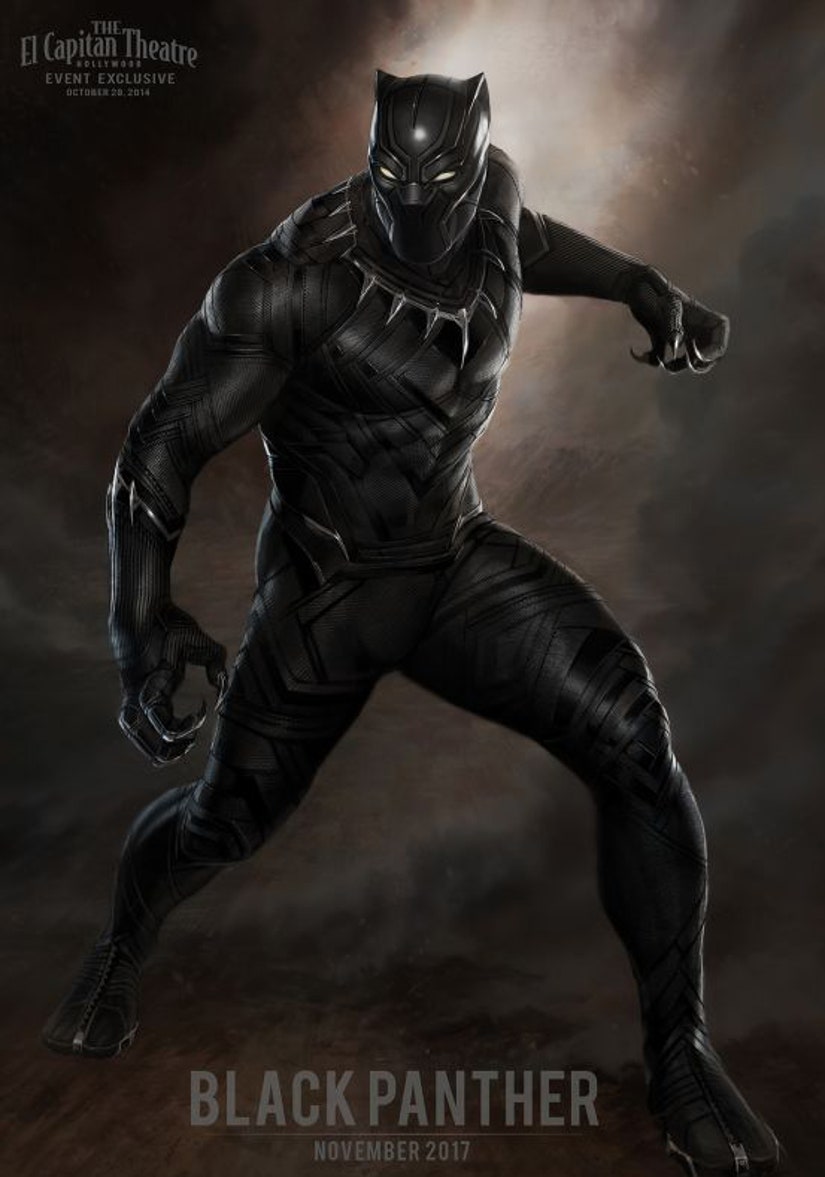 Robert Downey Jr. and Chris Evans were on hand to show the first concept art of the character (above) and then called the actor who'll play him, Chadwick Boseman, onto the stage.

"I'm blessed to be a part of this Marvel Universe, and to work with you both, and I look forward to making magic together," he told the two Avengers.

Benedict Cumberbatch is reportedly closing a deal to star in the film, but no casting announcements were made at the event.

"In the Marvel Cinematic Universe version of the supernatural, that involves everything from quantum mechanics to string theory. The idea of this film is to open up a whole new corner of the cinematic universe. We want to enter, through Strange, the world of parallel dimensions," Marvel president Kevin Feige told the crowd. He also teased "The Ancient One," Strange's mentor.

Opening sooner than expected is "Guardians of the Galaxy 2," which moves from its July spot to May 5, 2017. There were no other updates on that one.

Everyone's favorite god will hit the big screen again on July 28, 2017 -- and he's bringing Loki (Tom Hiddleston) back with him.

Feige said that "Rangarok" referred to "the end of all things," and made no mention to the cyborg version of Thor who goes by the same name. The film will pick up right where "Avengers: Age of Ultron" ends and "impacts everything that comes after."

Boseman's Black Panther will get his first solo film in November 2017.

"Black Panther, and all of Wakanda, is one of the most interesting characters in Marvel history," Feige said. "Something I already showed you today contains an Easter egg that leads directly into 'Black Panther.' He's a bit of a prince, he may even become a bit of a king, but it's all about how this isolationist country meets the world. Maybe it goes well, maybe it doesn't.”

Everything leads to this.

May 4, 2018 brings the first part of the third Avengers film, "Infinity War." Feige says the film is the beginning of the culmination of everything that has come before."

A video montage made it clear that the two films will revolve around Thanos and the Infinity Stones -- and gave us a glimpse of the mighty mad man wearing the Infinity Gauntlet. YES.

Carol Danvers will be coming to the big screen in "Captain Marvel" on July 6, 2018. This is the first female lead for one of Marvel's movies.

As for why she's getting a solo film before Black Widow, Feige says both Natasha and The Hulk play primary roles in the "Avengers" films and they really wanted to introduce new characters.

No word yet on when we'll first see Carol, but chances are she'll pop up in one of the movies mentioned above.

Last, but not least, a whole new pack of superheroes will be introduced in "Inhumans" in November 2018.

"They have dozens of powers and an amazing social structure. With our 20th movie in the Marvel Cinematic Universe, we wanted to continue to refine what that universe is about," added Feige.

No other details for that one just yet.

Yeah ... that's a lot of news. Which one are you looking forward to most?

And, for now, enjoy the "Ultron" trailer that was released last week ... it's still pretty awesome.