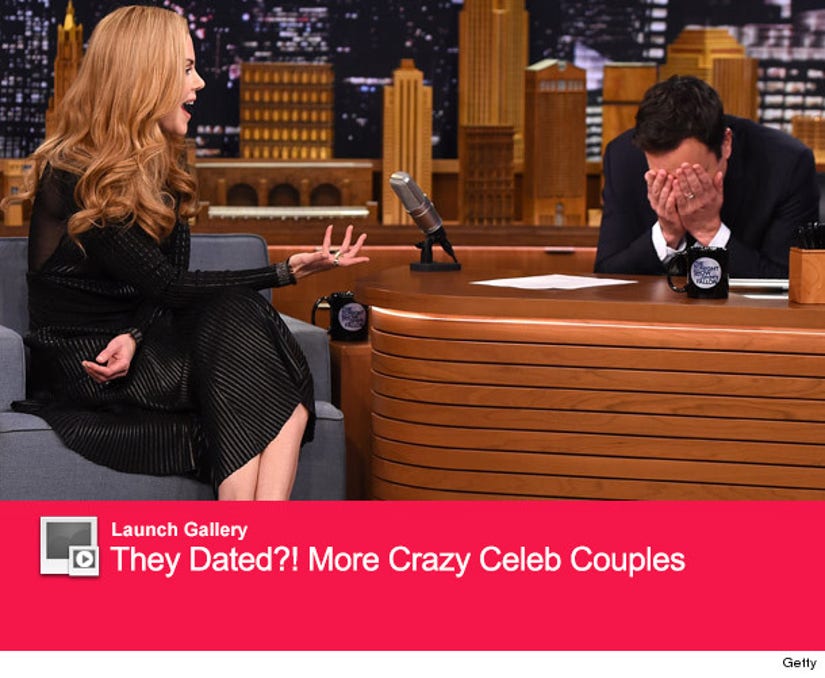 Jimmy Fallon turned down a date from Nicole Kidman?

The "Paddington" actress stopped by "The Tonight Show" Tuesday, where she revealed she was once up for dating the "SNL" comedian, but he blew his chance!

"I don't know if you remember this, but we've met before," Fallon reminded her. "Oh, I remember," she replied.

The late night host admitted the pair had met before under slightly odd circumstances, when a mutual friend brought Nicole to his apartment.

Fallon was under the impression it was a potential work meeting, but Kidman thought the meeting was a set up!

"I'm walking down the street in New York City, and my friend Rick calls me and says, 'Dude what are you doing? I have Nicole Kidman with me and she wants to meet you to be in 'Bewitched' or something. I can be in your apartment in 10 minutes,'" Jimmy recalls.

"I'm like, 'You're going to bring Nicole Kidman to my apartment? I don't...I mean what do I do? I don't have dinner parties, I don't have anyone over to my house. I have video games and sneakers,'" he remembers.

"I just remember I liked you," Kidman suddenly cuts in, causing Fallon's jaw to drop. "Not now, I'm married now," she clarifies. "But Rick was like, 'Jimmy wants to meet you and you can go over to his apartment,' and I was single...."

"Wait, what?" a stunned Fallon replies. "What are you talking about? Could I have dated Nicole Kidman?"

"Well I get there," remembers the now-married mom-of-four, "and you're there in a baseball cap, and like -- nothing. You wouldn't talk, you didn't say anything you were like, 'Hey, mmm, mmm, mmm!'"

"I didn't say, 'Mmm mmm mmm,' I was nervous!" yells a mortified Fallon. "I didn't know this was a thing, I thought it was a movie or something."

Check out the clip above to hear the rest of the awkward dating story!

After the two reminisced about what might have been, they sat down for a hilarious game of "Box of Lies." Watch the video above to see who is a better liar.

Do you think this pair would have been a good match? Sound off below!