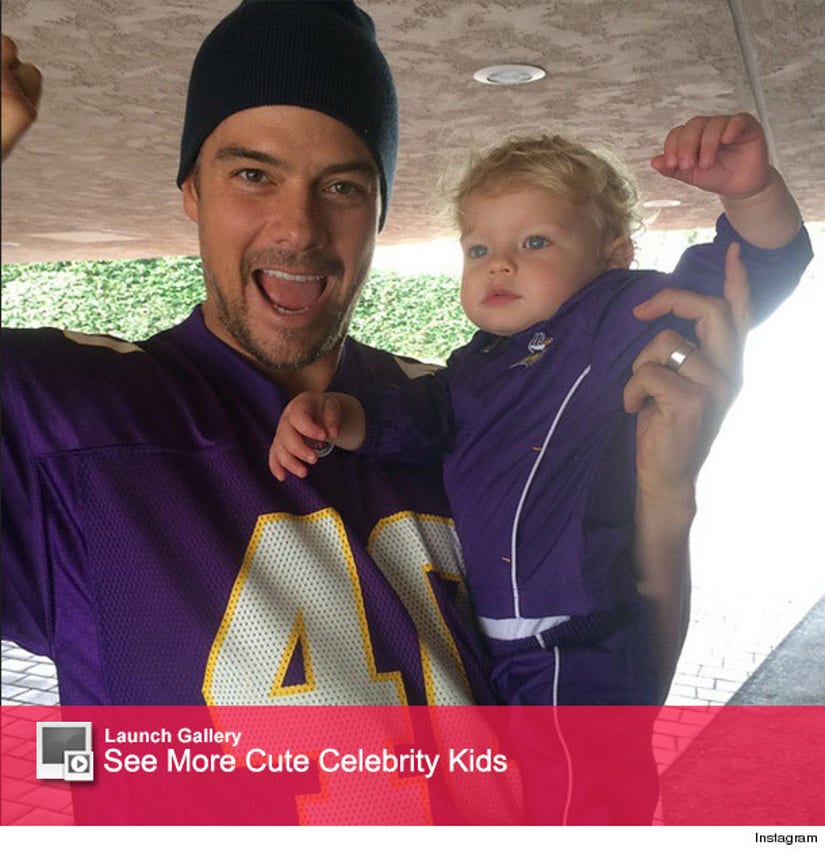 Josh Duhamel is enjoying every second of fatherhood.

The actor recently chatted with toofab's Brittany Kyles while promoting his new movie, "Bravetown," where he opened up about his adorable baby boy with wife Fergie, Axl Jack Duhamel.

For now, the sexy 42-year-old star says that Axl is a combination of both him and the "L.A. Love" singer ... but he's starting to see more of himself in their little guy everyday!

"I mean the kid is very social. [Laughs] And I guess both my wife and I are both very social. I think he's a very happy kid and I think we're both very happy. I think it's too early to tell. So far, so good," he says. "He's just a lot of fun right now and he just seems really happy and that's what we both care about the most, is that he's a happy kid who is just curious about everything."

"I guess time will tell who he is more like," the "Transformers" star adds. "I think he is kind of a mix between the both of us. He looks more like her in my opinion. But as he grows up, I start to see more of me in him. You look at those eyes and it's all Ferg's. That blonde hair is me, I had really white hair as a kid."

While Fergie and Axl didn't make it to set while Josh was filming "Bravetown" in his home state of North Dakota, Duhamel says that he doesn't like to spend more than a week away from his baby boy if he can help it.

"I was just in New Orleans shooting a movie and just got back about a week and a half ago and that was six weeks and I only saw my kid once in between," Josh explains. "So I went like two and a half weeks between seeing him and that was just too much. For me, I need to see him, a week I could probably deal with, but we learned a lesson that you start to miss him too much and it affects everything. FaceTime is a huge [life] saver. Before that, not being able to see him, that would have driven me crazy."

While "Bravetown" follows the story of Josh (Lucas Till), a hard-partying DJ who is reunited with his absent father much later in life, Duhamel says he could never be MIA from his own son's upbringing.

"It's hard for me to imagine me not being present in my kid's life," the "Safe Haven" star confesses. "I just couldn't imagine the psychology behind that. It must be such a sad existence to know that you have a kid out there that you don't speak to or interact with and have no involvement raising. It's just beyond me."

It definitely sounds like Josh is a hands-on father -- what do you think about the actor's candid comments? Tell toofab below and click "Launch Gallery" above to see more cute celebrity kids!

You can check out "Bravetown" now on iTunes and in select theaters!