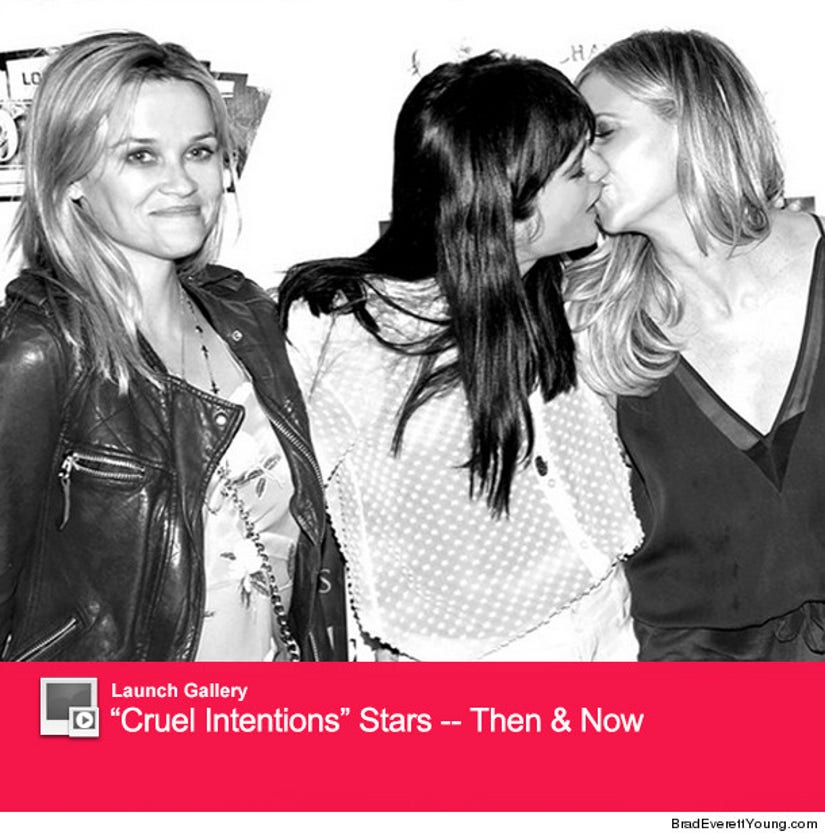 On Thursday night, the cast of one of our favorite teen films, the oh-so-scandalous "Cruel Intentions," reunited in Hollywood -- and it was EVERYTHING.

Reese Witherspoon, Sarah Michelle Gellar and Selma Blair, who all starred in the 1999 flick alongside Ryan Phillippe and Joshua Jackson, got together at Rockwell: Table & Stage last night to watch "The Unauthorized Musical Parody of Cruel Intentions."

The trio was in the house to celebrate film director's Roger Kumble's birthday.

We're told the three spent the entire show singing along to the songs, which included cuts from the film's soundtrack as well as '90s hits like "Love Fool" and "2 Become 1." The women were seen taking selfies with each other and drinking martinis while watching the performance.

Blair and Gellar, who famously kissed in the movie (and won an MTV Movie Award for their liplock), recreated the scene while posing for photos with Witherspoon (above).

Sources at the show also tell us that Reese couldn't help but recite one of Annette's lines, in character, during the show -- the audience "exploding into cheers" when she said it.

The three also joined the cast in a rousing rendition of "Happy Birthday," as Kumble was presented with a cake after the curtain call.

After the show, the film's cast mingled with the performers, with Reese giving them all presents -- boxes of candy -- backstage. Sarah was heard telling the film's director, Lindsey Rosin, that she thought the show was "the best thing ever" and she loved seeing it a second time just to see Reese and Selma's reactions.

If you're in L.A., we reallllly recommend the show. Performances are every Thursday and Friday night, from now until July 31 at Rockwell: Table & Stage.