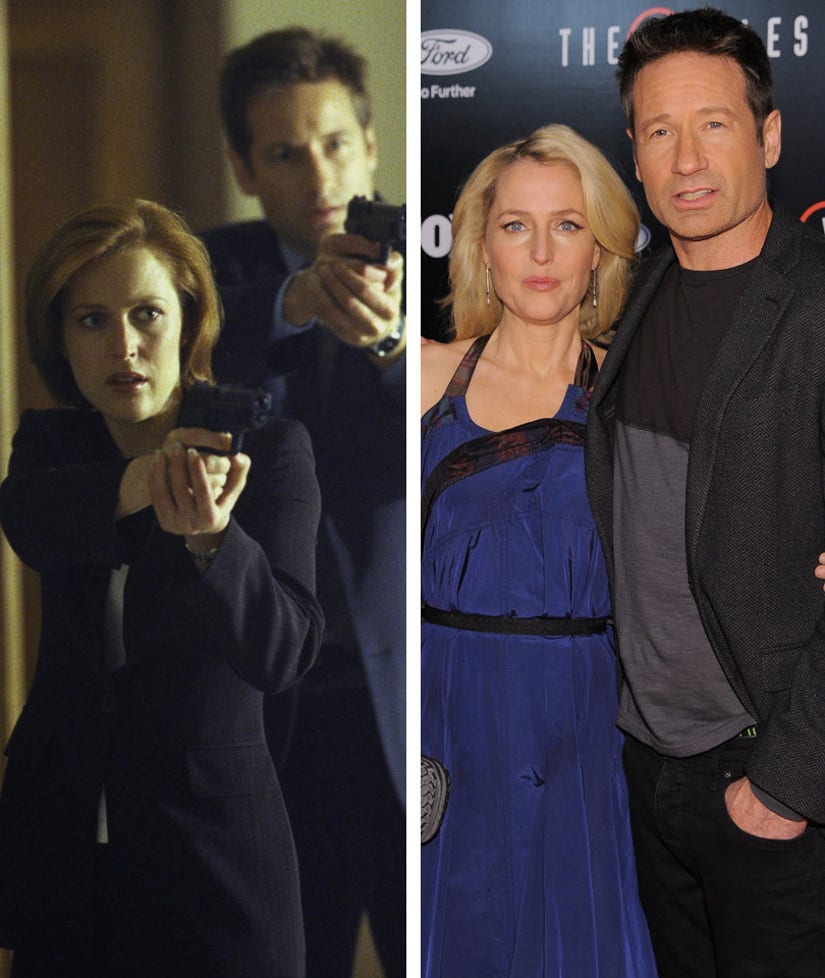 23 years of sexual tension came to a head last night on "Jimmy Kimmel Live!" as we witnessed Dana Scully and Fox Mulder finally get it on.

While it was more-than-implied the two had hooked up on "The X-Files" and Gillian Anderson revealed the two once filmed a sex scene that never aired, fan-fiction became reality on Wednesday night.

The duo, who reprise their roles in an upcoming 6-part miniseries kicking off next week, appeared in a sketch before sitting down with Kimmel last night, poking fun at how dated the original series seems now. From Scully's ancient (and gigantic) cell phone to the once-familiar sounds of AOL's dial-up tone, viewers were reminded how much things have changed since the '90s.

"It was a great decade. Great music, Hootie," David Duchovny says while reflecting on the past in the video. "Beanie Babies, Pogs, everybody loves Pogs."

"You guys, oh yeah of course, we loved you then and we love you now," adds Kimmel, playing a new agent. "Even if coming back is a bad idea, like a really really bad idea that makes everyone hate you, we'll still always have the '90s."

"Also, you two, should have sex. You should, its been like 23 years. It's time to do it already," he continues. Check out their steamy liplock above!

The two also appeared in an interview later, where Kimmel grilled them about tension of another sort on set back in the day.

"There was a lot of camaraderie, it seemed like, was it always like that?" he asked. "NO," they both emphatically responded, before agreeing there were some "rough patches" in the '90s.

While it's been reported that Gillian wasn't thrilled David was getting paid more than her initially and Duchonvy hated Vancouver so much he wanted the show to move production to Los Angeles, Anderson offered up another explanation.

"We shot in Vancouver and it's very moist in Vancouver," she said, before cracking up laughing. She went on to explain that the humidity messed up her hair, causing delays in shooting because they'd have to touch it up between takes. "And I got pissed at that?" David asked. "I think it added to the tension," she added.

"That kinda makes me sound like an a--hole," David shot back.

The shows stars celebrated the red carpet premiere of the new miniseries last night as well, where they were joined by Mitch Pileggi (Skinner), Annabeth Gish (Agent Reyes) and William B. Davis (The Cigarette Smoking Man), as well as newcomers Robbie Amell, Lauren Ambrose and Joel McHale.