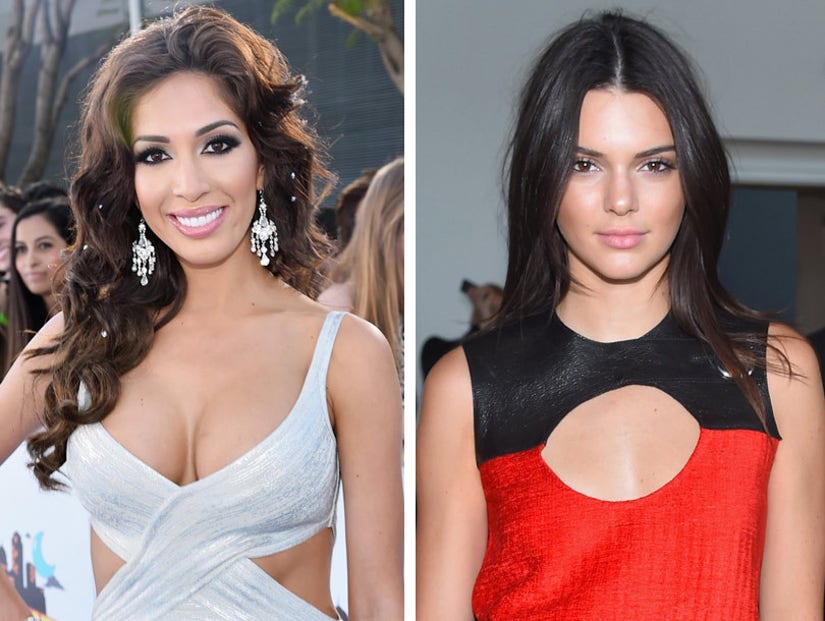 On Wednesday night's premiere of "Kocktails with Khloe," Snoop Dogg and Kym Whitley reenacted Farrah and Nicki's online beef, wigs, random accents and all. After their performance, Khloe's guests then revealed who they sided with -- and while Aisha Tyler stuck up for the "Teen Mom" star, Kendall took the opportunity to bash her.

"Farrah won the Twitter war because she stayed gracious until the end," the "Talk" co-host said. "I don't really agree with a lot of Farrah's decisions in life, that's why I would say I'm on Nicki's side," Jenner shot back, adding, "I'm always on Team Nicki."

Well, that comment didn't sit too well with Abraham, who took to her Instgram page today to bash the entire Kardashian family.

The reality TV star posted a meme showing one of the family's holiday cards with Ray J in the corner, along with the words, "I made this whole family famous with my d--k!"

FYI: Farrah did approve of Snoop's portrayal of her, despite his odd Indian accent.

Flattered @SnoopDogg played me on @FYI look forward to my own talk show when this one gets canceled🍸🍸cheers pic.twitter.com/Nu2D9cdo9b

In case you forgot, the rapper and reality star first went at it earlier this month, after Nicki posted some unsavory things about Farrah on Twitter while watching an episode of "Teen Mom OG."

Minaj's response: "Your mother didn't open her legs and have the child. Be happy she's helping! Stop talking to her like that on tv u lil c---. In your case #BIGC---" Instead of dragging your mother, learn the difference between 'you're" & 'your', ding bat."

It ended with Farrah typing, "You must really want attention--talk about women with respect - it's Sunday stop watching reruns & go to church. To be clear my mom doesn't help me i help her. I love & care for my mom. Stop disgusting talk @Nickiminaj."

Whose side are YOU on? Sound off below.