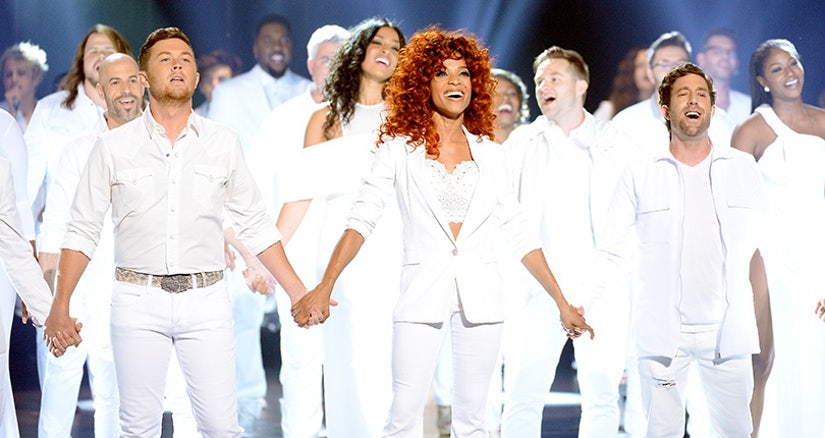 After 15 seasons on the air, "American Idol" came to an end on Thursday night, with a 2-hour show packed with familiar faces from the past 14 years.

The nostalgia kicked off almost immediately, with Season One co-host Brian Dunkleman popping up on stage to interrupt Ryan Seacrest's intro. 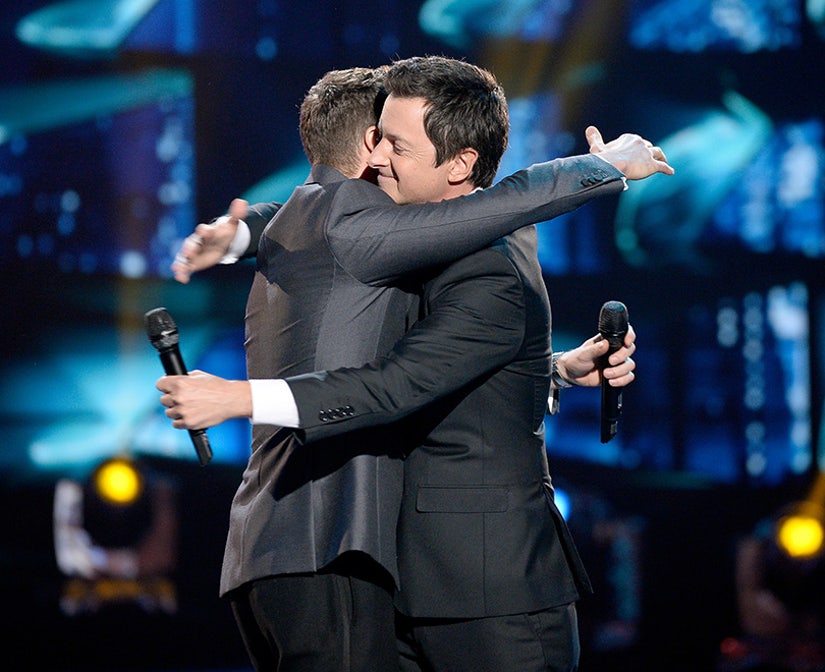 "Well, well, well, Seacrest. Looks like after tonight, you're gonna be out of the job," Dunk joked. "And trust me, nobody knows the pain of life without 'Idol' more than me. Don't worry buddy, being unemployed, it's not that bad."

"I just wanted to stop by and congratulate the show for struggling along for another 14 seasons without me," he continued. "There's something I've been waiting to say for you ... you've done an amazing job hosting this show all these years. I congratulate you on all the success!"

They shared a hug and that was it. It was a quick -- but sweet -- moment. See what Dunk recently said about why he left he show here.

From there, the medleys starred in wild succession.

Former judge Kara DioGuardi was joined on stage by Tamyra Gray and Jordin Sparks, as they all belted out a P!nk jam. The number transitioned into a duet of "No Air" between Sparks and Season One runner-up Justin Guarini. Guarini, who looked mighty handsome without that ridiculous hair he was known for back in 2002, then hit the road ... and Jordin was joined by Kimberley Locke, Allison Iraheta and Pia Toscano.

The women performed a fierce rendition of Meghan Trainor's "No" -- having us scream, "Slaaaaay!" at the TV screen. They were briefly interrupted by Larry Platt, who broke into his infamous "Pants on the Ground" rap, before going back to Trainor's latest single.

Next up, it was Kelly Clarkson. While Kelly was a little too pregnant to perform live, she recorded a medley of hits when she visited the show a few weeks back. Singing everything from "Breakaway" to "Invincible," the OG "American Idol" proved she's still got it all these years later. She ended the medley with the song that won it all for her: "A Moment Like This."

We got chills. Can you believe how far she's come since 2002? Major kudos, Kelly!

That was followed by a rocker medley with former judge Steven Tyler, who was joined by Bo Bice (who looked TOTALLY different without his long hair), Constantine Maroulis, a very blonde James Durbin and Caleb Johnson. After the guys rocked through "Hard to Handle," Chris Daughtry joined them to perform his single, "Torches," before transitioning to "Tobacco Road."

Following the rockers, the theme changed to country for a bit.

Carrie Underwood performed Stevie Nicks' "Stop Draggin' My Heart Around" with current judge and country superstar Keith Urban. The twang continued with Diana DeGarmo, Skylar Laine, Kree Harrison doing a joint performance of Taylor Swift's "You Belong with Me," before they were joined by Bucky Covington, Ace Young, and Constantine Maroulis.

Lauren Alaina, Kellie Pickler and Scotty McCreery all entered the fray, ending this portion of the show with a group rendition of "Where the Pavement Ends," packed with some incredibly awkward country line dancing.

The show slowed down a bit next, with Harry Connick Jr. performing "What a Wonderful World" with incredibly talented youngster Marley Fletcher. If "American Idol" were to ever come back, this girl would HAVE to try out!

The ballads continued with hotties Katharine McPhee and Casey James singing Lady Antebellum's "Need You Now." Carly Smithson stunned in a black sequin gown as she sang Dolly Parton's "Here You Come Again," before Clay Aiken belted out John Denver's "Annie's Song." The velvet teddybear himself, Ruben Studdard, was then joined by Amber Holcomb to sing The Beatles' "Here, There, And ..."

The ballads ended with Jessica Sanchez, who absolutely crushed her performance of Celine Dion's "The Prayer."

The former contestants got a momentary break when it came time for Jennifer Lopez's final performance on "Idol," hitting the stage to debut her new single, "Ain't Your Mama." After ripping off her apron for the number, she broke into "Let's Get Loud" -- showing off her hot bod and equally sexy dance moves in a sheer purple number. The performance ended with an epic booty shot -- and we wouldn't have it any other way.

Next, it was time for a little soul.

La Toya London, Fantasia Barrino and Jennifer Hudson, all in white, performed "Bridge Over Troubled Water." J-Hud then went solo, belting out "Remember the Music," before a Motown number from Brandon Rogers, Clark Beckham, Danny Gokey, George Huff, and Elliott Yamin. The guys all performed an energetic rendition of "Ain't Too Proud to Beg."

Fantasia had a solo too, singing her single, "Ugly," before La Toya and Taylor Hicks hit the stage to do Aretha Franklin's "I Knew You Were Waiting for Me." Joshua Ledet also got a pimp solo, slaying "It's A Man's World," before Melinda Doolittle and Candice Glover crushed their own song.

After a break, it was time for the white guys with guitars to join forces for a David Bowie tribute. Phillip Phillips, Lee DeWyze, David Cook, Nick Fradiani and Kris Allen all performed a medley of "Starman," "Rebel, Rebel" and "The Jean Genie."

The number proved how much America loves their white boys!

Moments later, Simon Cowell walked out ... as they all feigned surprise. TMZ announced he'd pop up during the show -- and they were right.

After making fun of his own mean demeanor, telling Paula she should apologize for being "really horrible" to all the contestants she judged, he gave a special speech for all the show's fans.

"I'd like to say on behalf of us, thank you America for inviting us into your homes," he told the crowd. "Thank you contestants, to Fox for putting us on air, for you guys being my best friends now. I'm gonna miss you."

"Without the fans, there would be no show. To the finalists tonight, enjoy yourselves. Remember the fans who voted for you. I'm feeling quite emotional."

And what would a finale be without William Hung? It wouldn't be complete without one final rendition of "She Bangs."

Unfortunately, Ricky Martin didn't pop up to join him.

Two hours later, the show ended with the moment we were all waiting for: the announcement of this year's "American Idol."

The last moments of the show belonged to Ryan, who gave an emotional final sendoff -- almost seeming like he was about start crying as he said, "We say to you from Hollywood, goodnight America ... for now."

There have been rumblings that the show could return in some form in the future. Think that was Ryan's way of saying it'll likely happen?