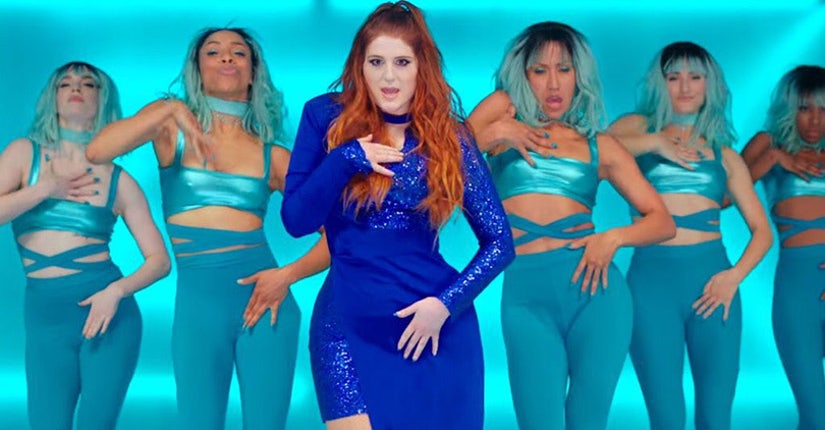 Meghan Trainor just said "No" to her new music video.

The "All About the Bass" singer pulled down the visual for her latest single, "Me Too," accusing the editors of "Photoshopping" her waist to look slimmer in the finished product.

While the clip had been posted on Vevo earlier today -- check out a short snippet below -- the video was later removed from the site entirely. The record company is vigorously pulling any copies on YouTube as well.

M-Train (@Meghan_Trainor) slays the haters in her latest 'Me Too' video: https://t.co/A0Ps8dmnAyhttps://t.co/NDz0UEmkej

"Hey guys, I took down the 'Me Too' video because they photoshopped the crap out of me," Trainor revealed to her fans via Snapchat. "I'm so sick of it and I'm over it, so I took it down until they fix it."

"My waist is not that teeny, I had a bomb waist that night [they filmed], I don't know why they didn't like my waist, but I didn't approve that video and it went out for the world, so I'm embarrassed," she continued. "I told them to fix it A$AP Rocky cuz I will be going to Times Square to play it for my fans, so I hope they fix it for me. And I am sorry about this. The video is still one of my favorite videos I've ever done, I'm very proud of it. I just am pissed off that they broke my ribs, you know?"

It's unclear when she's planning on showing it at Times Square or when the new version will be ready.

The 22-year-old singer is all about being body positive, fully embracing her curves with the song "All About That Bass." But, earlier this year, she said she still battles insecurities.

"Recently we were doing a fitting for this music video [for "No"], and I was like, 'All these dancers next to me, they're so tiny,' and I felt insecure again," Meghan told Entertainment Tonight. "My best friend was like, 'You are all about that bass. Do not forget that.' I was like, 'You're right! I am hot, and I look bomb in these outfits, and I'm going to kill it in this video.'"

See her unaltered physique in that one below: