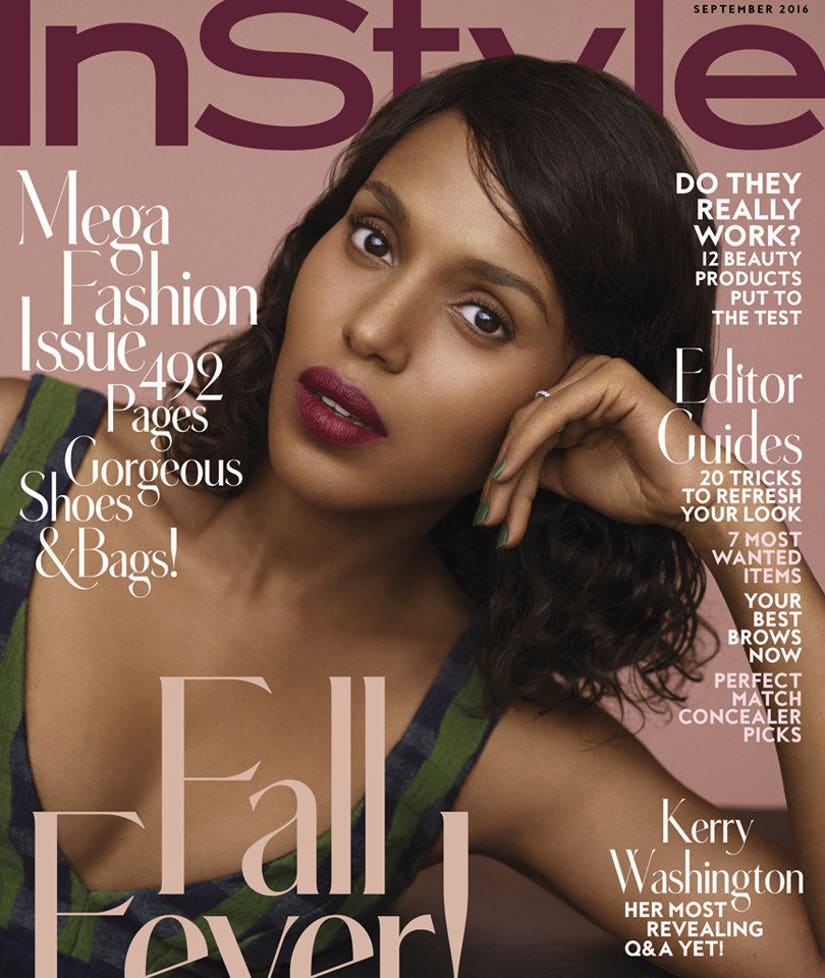 The "Scandal" star also stuns within the pages of the magazine, sporting envy-inducing designer outfits in an oh-so-chic spread. But despite being pregnant with her second child, the 39-year-old admits that finding fashionable maternity wear isn't any easier now that she's expecting baby No. 2.

But with Washington filming her hit television show while pregnant—and making regular red carpet appearances—she's had to figure out a few fashionable solutions. Thankfully, she has the help of a crafty wardrobe department—and one very famous friend—when dressing her baby bump.

"There's nothing high-end for professional women who are pregnant," she tells the mag. "So for the show, we wind up just buying the same clothes. We will cut out the front of Armani trousers and put in a pregnancy panel."

Sounds like a fun DIY project but we'd hesitate taking a pair of scissors to our designer duds!

"I also got this great idea from Jessica Alba: She told me she had this box of maternity clothes that she would ship from girlfriend to girlfriend … I'm now getting clothes back that I wore the first time," she reveals. "Everybody adds cute stuff to the box. You're less afraid to spend money because you feel a lot of people are going to use it."

Sounds like a more doable idea (minus, you know, the getting the box from Jessica Alba part).

While pregnancy has forced Washington to come up with some shrewd sartorial solutions, it's also impacted her life in countless other ways, including her realization that she needed more "stillness" in her frenzied celebrity life.

"There's something about pregnancy," she says, "that willingness to take up more space in the world—that is liberating."

She's also turned to her boss Shonda Rhimes for a little advice on prepping for her second child.

"I consider myself busy, but [Scandal creator and writer] Shonda Rhimes has about four of five shows, three kids… She says, 'If you feel like you have just the right amount of help, then you don't have enough.' My therapist said this too. You need a lot of support. No just logistically but emotionally and spiritually."

All things considered, Washington seems to be handling motherhood and her career just fine if you ask us!