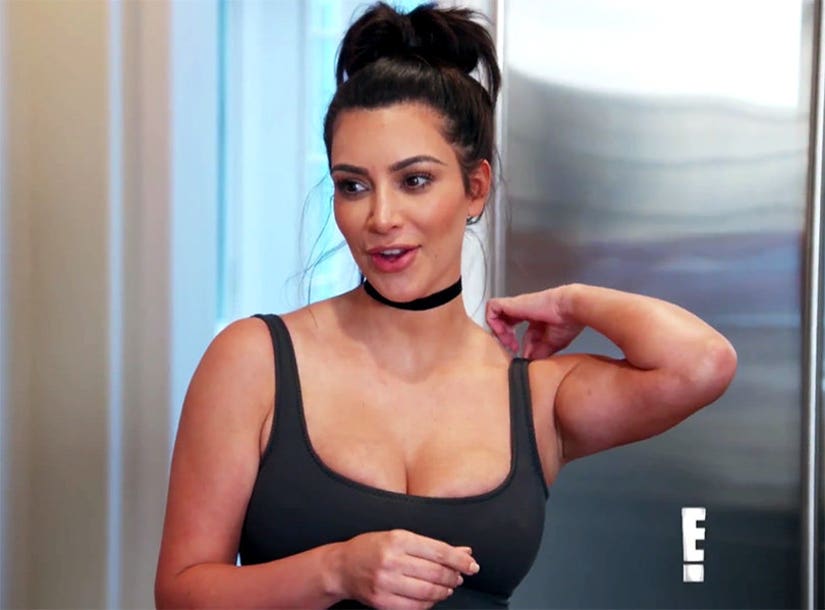 Kim Kardashian is known for her increasingly sexy style -- but did she take it a little too far with this outfit?

In a sneak peek at Sunday night's finale of "Keeping Up with the Kardashians," Khloe takes her sister to task for looking like a prostitute when she shows up to visit Rob Kardashian at his house.

While Khloe and Rob are trying to have a heart-to-heart, Kimmie walks in sporting a curve-hugging mini that really accentuates her cleavage and legs.

"Oh my ... you gotta get out of here," a shocked Khloe exclaims as her sister comes through the door. "Kimberly, how much are you?"

Even Kim has to admit the outfit was a bit racy for the middle of the day.

"The neighbor did look at me like 'Hooker city," she jokes. "I did feel uncomfortable for one second."

"They probably think Rob paid for you!" Khloe adds.

After the initial shock wears off, the trio talk about Rob's recent blowout with Blac Chyna, as he makes it clear he wants to try and work things out with his pregnant fiancee.

"My plan is not to have a kid with somebody and not be with them, that's just bizarre to me," he explains.

While this episode was likely filmed months ago, Rob and Chyna are in a much better place now, doing a joint interview in this week's issue of PEOPLE to talk about his weight and family drama.

Rob's issues with his fam started around sister Kim Kardashian's wedding to Kanye West in 2014, when he fled Italy and didn't attend the nuptials.

"I was very unhappy with the person I saw in all the pictures," he says now. "I'm 6'1" and at my most I probably weighed 300 lbs. I'm upset I missed my sister's wedding but it was a personal decision. I'll never go to that place again. I missed Christmases and birthdays and vacations. I definitely retreated."

"We all have a really good relationship right now," Chyna also tells Elle of their dynamic. "Everybody is talking. Everything is good."