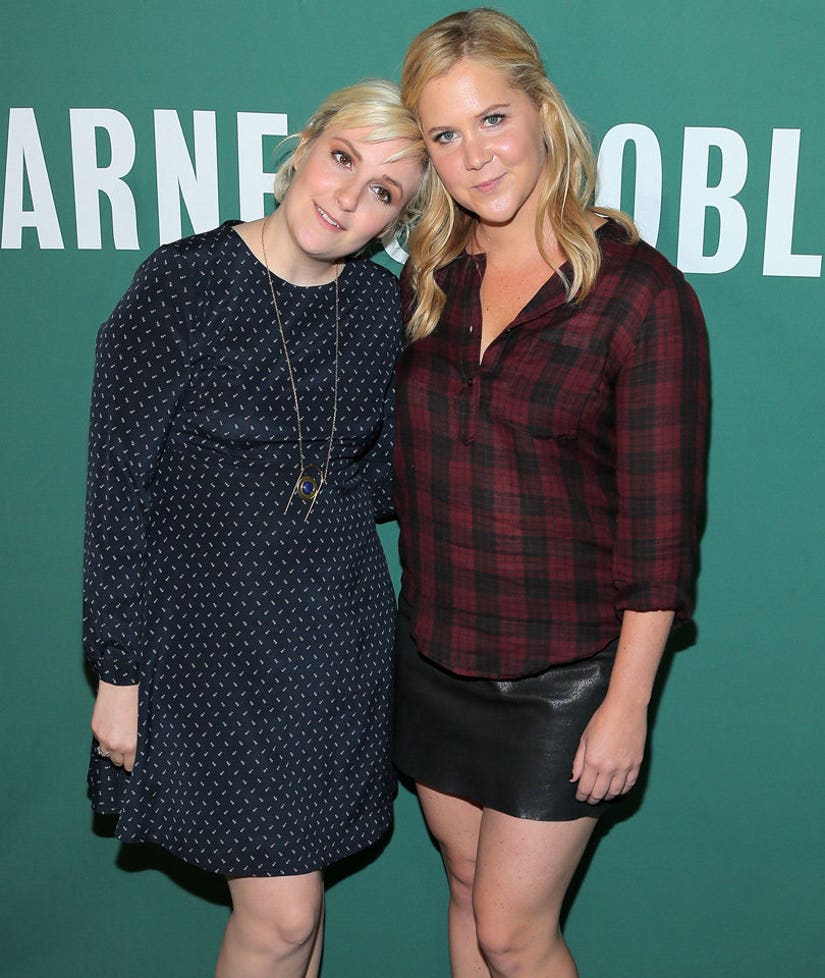 UPDATE: After trending all day for her comments, Lena Dunham has taken to Twitter to clarify her remarks about Odell Beckham Jr.

.@OBJ_3 is talented, stylish, seems super awesome and wasn't into chatting with me at a fancy party.

My story about him was clearly (to me) about my own insecurities as an average-bodied woman at a table of supermodels & athletes.

It's not an assumption about who he is or an expectation of sexual attention. It's my sense of humor, which has kept me alive for 30 years.

Glad the outrage machine roars on though, right @amyschumer?

ps I'll try and dance myself onto @michaelb4jordan if I have the chance, even when I'm a married grandma. I'm a red blooded str8 woman!

Sounds like Amy Schumer and Lena Dunham have quite a bit in common!

In a new interview the "Girls" star's Lenny Letter, Dunham interviews Schumer about the 2016 Met Gala, body shaming and more -- and these two don't hold back!

During the candid conversation, both stars reveal how much they disliked the Met Gala ... each trying to duck out of the annual fashion event early.

"I left so early," Amy confessed. "When did you leave?"

"I attempted to grind my ass on Michael B. Jordan for an additional twenty minutes and then left right after you," the "Girls" star admitted.

"I was sitting next to Odell Beckham Jr., and it was so amazing because it was like he looked at me and he determined I was not the shape of a woman by his standards," she continued. "He was like, 'That's a marshmallow. That's a child. That's a dog.' It wasn't mean — he just seemed confused."

"The vibe was very much like, 'Do I want to f--- it? Is it wearing a … yep, it's wearing a tuxedo. I'm going to go back to my cell phone.' It was like we were forced to be together, and he literally was scrolling Instagram rather than have to look at a woman in a bow tie. I was like, 'This should be called the Metropolitan Museum of Getting Rejected by Athletes,'" Dunham joked.

"You were dressed like a boy, and you looked sexy, and I really appreciated you showing me your t--s several times," Schumer quipped.

Later in the convo, Lena and Amy open up about their experiences with body shaming -- specifically when Schumer called out Glamour magazine for labeling her as "plus-size."

"I loved this year when you were like, 'I'm not fat, and I'm not skinny, and why do I have to be in this plus-size category?' after a magazine called you plus size on their cover," Lena said. "I know it ended up being a f---ing pain in the ass for you, but what I was so glad about was that you were just being like, 'Why, when you see a woman and she has 18,000 contributions to the world, would your desire be to place her in a random category you came up with?"

"Right. I said, 'I think it's unfortunate that we still live in a time and a country where normal isn't good enough. The media body-shames women of healthy, normal sizes,'" Amy explained. "That's why I spoke up about the plus-size thing. Because plus-size, unfortunately, still does have a negative connotation."

It definitely sounds like both women have a ton in common -- what do you think about Amy and Lena's candid conversation? Sound off below and check out the gallery above to see more stars who've battled weight criticism.