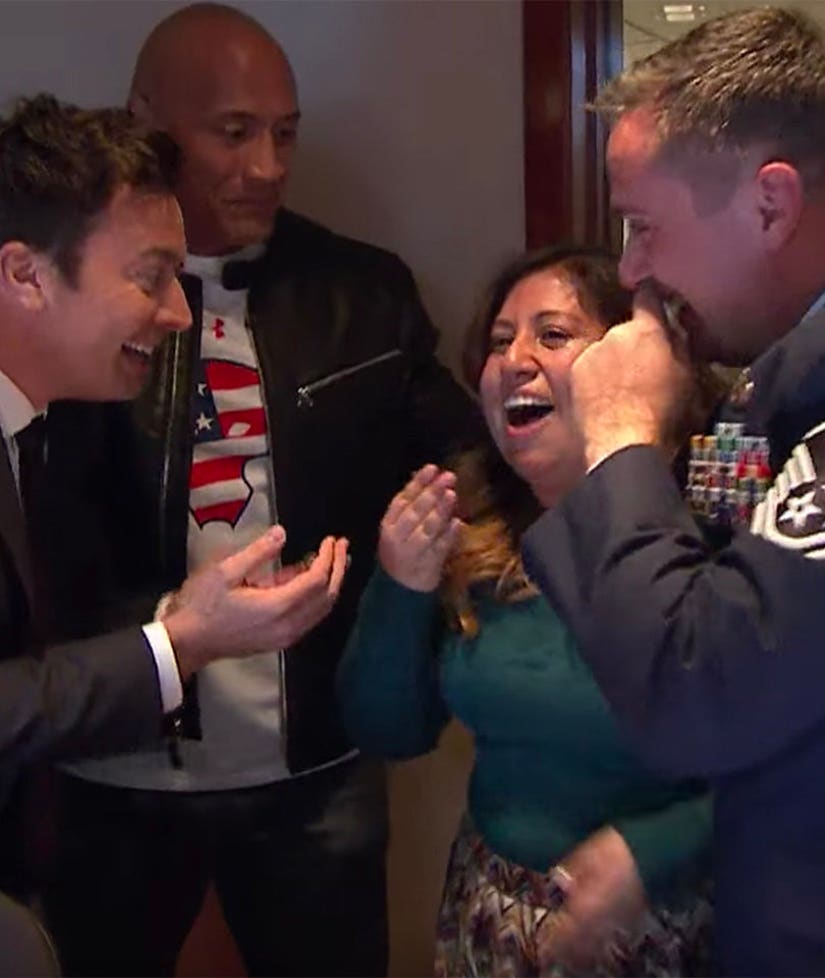 Jimmy Fallon and Dwayne Johnson -- AKA The Rock -- surprised a "Tonight Show" staffer whose husband had been deployed in the most moving way possible.

On Friday's episode of "The Tonight Show," Johnson guest starred, and during his interview, revealed that he'd love to give back to a military family in the audience. Little did show producer, Karina Kabalan, know, she was the one who'd be getting the surprise.

He said: "I think if we ever have the opportunity to give back to our troops, I think all should, 'cause we ... live and enjoy the life we have."

"There is one more thing left I'd like to do before I leave tonight, Jimmy, so I would love to give back to a military family that's actually here in the audience," he continued, as the audience cheered. "That's so nice," Fallon replied, fighting back tears already.

Johnson revealed that the person did not know that she'd be receiving the "surprise."

The two walked through the audience, putting on a production and saying, "No, no; I don't see this person," and hemmed and hawed long enough till they found Kabalan, who was backstage in the control room. After the duo located the room, Johnson asked, "Where is Karina?" to which Kabalan responded, "What is happening here? What's going on?" as she laughed and smiled.

The two hugged and greeted one another, with Kabalan still in the dark about her surprise.

Johnson told Kabalan her story, verifying her husband's name and in what branch of the military he served, and reiterated the fact that the married couple spent the last 18 months apart from one another, thousands of miles away.

During this time, Kabalan's husband was walking up behind her without her knowledge, and as Johnson thanked Kabalan -- a vet herself -- and sang her husband's praises, and dropped the bomb by telling her that they'd brought her husband home for the holidays ... and he was in the control room behind her.

Cue the tears, and watch the video (below).

See celebs who've served in the military in the gallery (above)!