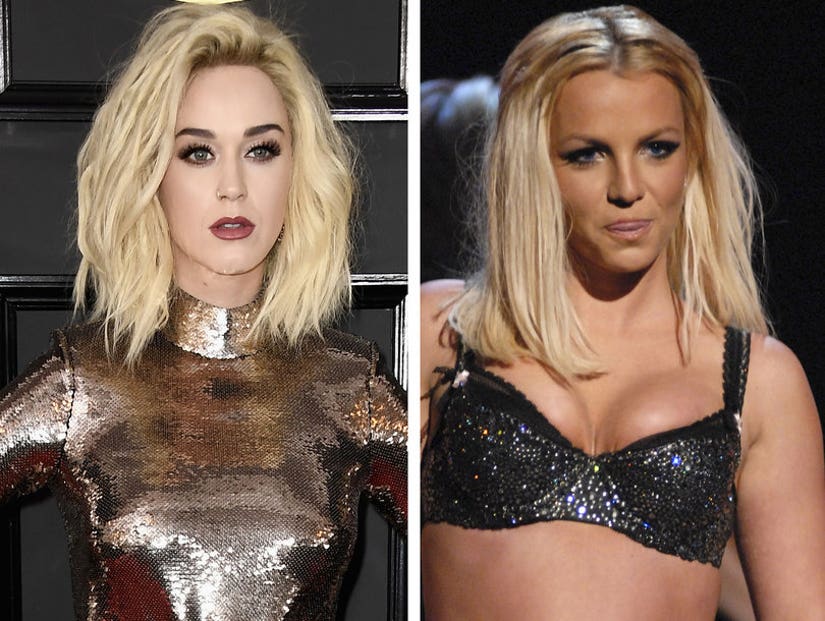 Katy Perry's comment about her "mental health" on the Grammys red carpet Sunday has enraged Britney Spears fans, who are convinced the "Chained to the Rhythm" singer was throwing shade.

When Ryan Seacrest asked Perry why she's been basically MIA from music since the release of her 2013 album "Prism," Perry responded, "It's called taking care of your mental health. I haven't shaved my head yet.”

Spears' fans interpreted the remark as a reference to her very public meltdown in 2007, when she shaved her head and was photographed swinging an umbrella at paparazzi.

Not only were people bothered that Perry may have been poking fun at Spears, but many also felt it was insensitive to anybody suffering from mental health issues. The infamous head shave happened nearly 10 years ago, and while many can find humor in the countless memes surrounding the meltdown, Spears' fans have always been ride or die, so Perry is not getting off easy.

The Grammys performer made a similar remark later on during a CBS interview, and it didn't take long for #KatyPerryIsOverParty to start trending on Twitter.

“There's only two types of people in the world,” one Twitter user wrote, “one is an icon & other is a copycat fan.” Another tweeted, “Britney's shaved head is still more iconic and famous than Katy's entire career.”

Britney and Katy even attended “The Smurfs 2” premiere together in 2013. How can bonding over tiny blue animated gnomes not solidify a lifelong friendship?

Here's some of the heat Katy's received on Twitter (so far):

A 32 years old woman who makes music for 5y.o. Children shaded pop icon Britney Spears ! Who is she ? #KATYPERRYISOVERPARTY pic.twitter.com/NKxQ4uNWFV

Sending my RSVP to the #katyperryisoverparty ✌🏻see y'all there pic.twitter.com/pOb2ytJN4B

Oh they thought it was over ? The Swifties, Selenators, and Little Monsters are joining the party now. #KatyPerryIsOverParty pic.twitter.com/vJKmeQSsHO

"And I haven't shaved my head yet".. So, @katyperry let me help you sweetie #katyperryisoverparty pic.twitter.com/JDfNBNUPq9

there's only two types of people in the world... one is an icon & other is a copycat fan ☕️ #KatyPerryIsOverParty pic.twitter.com/dmmkUQtpP9

I hope katy realizes how offensive her comment was and apologizes at LEAST on twitter. either way she's over. #KatyPerryIsOverParty

Inside the Grammy Awards 2017