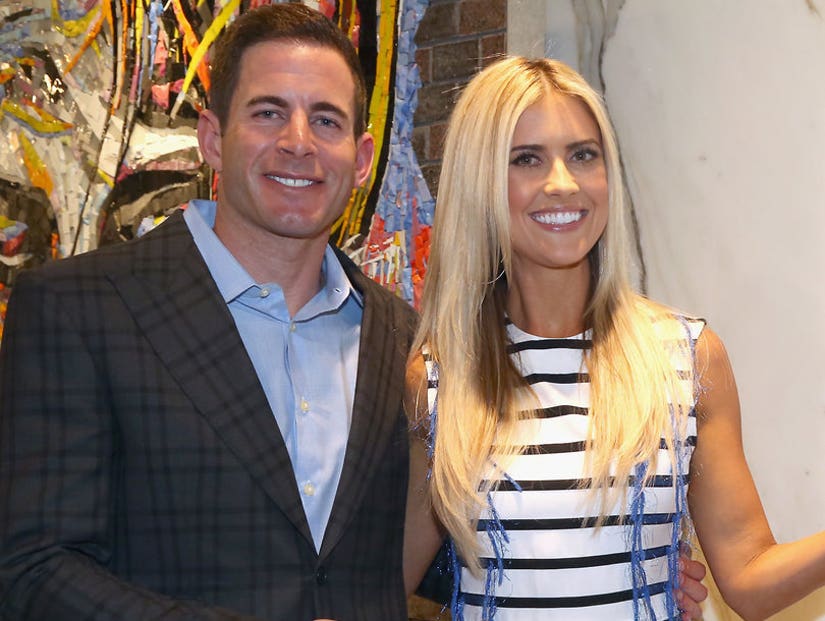 Season 6 of HGTV's "Flip of Flop" is currently airing so Tarek and Christina El Moussa took over the morning shows on Tuesday for their first televised interviews about their surprise split.

While Christina appeared on "Good Morning America," Tarek popped up twice on "Today," for both a pre-taped and live interview. The duo addressed co-parenting, what it's like to work together following their divorce and attempted to clear up "fake news" surrounding that gun incident.

They Have No Plans to Stop Working Together

"Currently season 6 is on air and Tarek and I are filming Season 7 of 'Flip or Flop' and filmed together, three, four days a week," Christina revealed. "We have a great crew, we have so much fun on set and we, you know, we look forward to continuing the show."

She said they'd probably "always be working together" in the future, between the show and speaking engagements.

Tarek also said they're "hoping to continue shooting the show," though HGTV hasn't announced anything past Season 7. "We love what we do, we've been doing it a long time. That's our job. We're looking on moving forward."

"I'm not gonna lie, I'm not gonna say it was easy," Tarek added of filming during their split, "It's like anything, there's challenges in life."

"Through this entire process, me and Christina have been professional," he added. "I feel like we've done a really good job."

About That Whole Gun Thing ...

Last May, police responded to "a call of a possibly suicidal male with a gun." Cops responded and found Tarek in the woods around his home, where he said he was only trying to "blow off some steam," and brought the gun for mountain lions and rattlesnakes.

"I went out for a hike to scout some trails, it wasn't even a big deal. I didn't understand. It got really blown out of proportion," he said of incident on "Today."

When asked if he was suicidal, he said, "No, never, never, absolutely never."

"I was hiking in the mountains by myself. The sun was going to be going down soon. Why wouldn't I go out with protection if I've legally gone through the courses to be able to do so?" he added.

There's A Lot of "Fake News" Out There

Invoking Donald Trump's infamous "fake news" mantra, the two said a lot of the gossip out there about the split is simply untrue.

"There's so much weird gossip and fake news out there, I try to ignore it as much as I can," Tarek said, without clarifying which rumors he was addressing. "I'm really just focusing on my kids, myself and my future. I want people to know that no matter what happens, the most important thing is to coparent and do what's right for our kids."

"There's a lot of, you know, false stories and a lot of hype, but, you know, in the end we're just normal, nice people who just, you know, want to be the best parents and, you know, co-workers that we can be," added Christina.

They Insist Co-Parenting Is a Dream

"It's honestly going really good," said Christina. "Our kids are amazing. Our son, he's 18 months, he's like literally the happiest kid on the planet. He's always in a good mood and Taylor, she's 6 and she's awesome. She actually just won an award at school for being joyful, so just shows our kids are transitioning well."

"Tarek and I are friends and we have a lot of support from our family and, you know, despite everything, you know, that articles show … the kids are doing great, really great," she added.

"The number one goal is to coparent our children and we have to make sure we remain friendly," said Tarek, "because we know how it important it is for them to have good parents."

"They're getting accustomed to the new situation. Christina's being a great mom, I like to think I'm being a great dad," he added.

While Tarek was open about his battle with thyroid cancer after a viewer alerted him to symptoms, he was also fighting testicular cancer.

He revealed that news for the first time Tuesday morning, saying "I literally thought I was gonna die."

"I just didn't want to come out with it, it was more of a personal thing," he said of his diagnosis. "For me, the reason I'm coming out with it is to create awareness and I feel like it's something I have to do."

Both cancers are in remission.