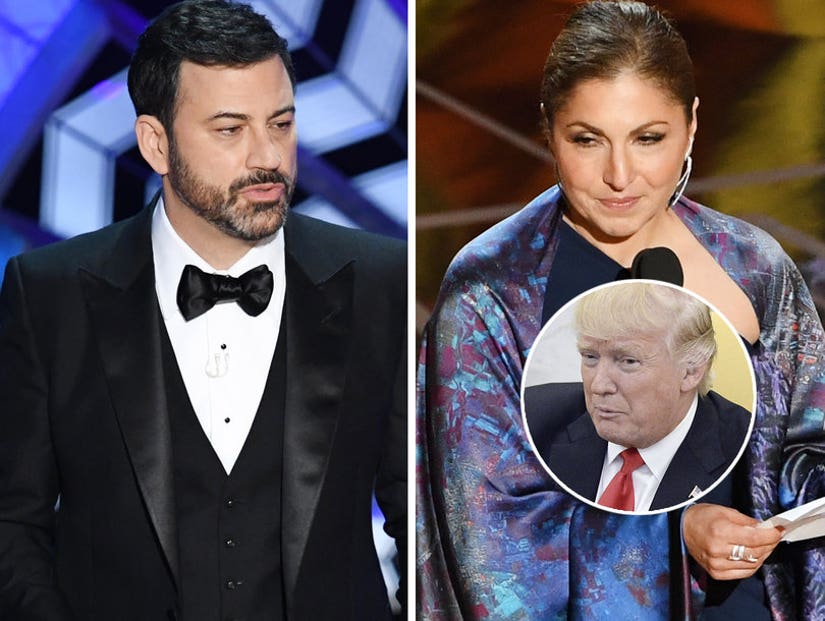 As expected, the Oscars did not shy away from politics on Sunday.

Between host Jimmy Kimmel, presenters and winners, President Donald Trump and his executive order attempting to ban immigrants from seven predominantly Muslim countries were on the tip of everyone's tongue.

"I want to say thank you to President Trump. Remember last year when it seemed like the Oscars was racist? That's gone, thanks to him," Kimmel joked during his hilarious opening monologue which was ripe with political commentary.

Kimmel also reminded the stars lucky enough to win an Oscar, "You get to come up on stage and give a speech that the President of the United States will tweet about in all caps at five in the morning."

He also mocked Trump for blocking select media outlets from the White House briefing room last week. "If there's anyone here from CNN or the New York Times ... I'd like to ask you to leave the building right now. We have no tolerance for fake news," Kimmel said.

Alessandro Bertolazzi, one of the three "Suicide Squad" makeup artists to win the Oscar for Best Achievement in Makeup and Hairstyling, also made it clear how he felt about Trump's travel ban.

“I'm from Italy, I work around the world,” the Italian man said. “This is for all the immigrants.”

Cheryl Boone Isaacs, the President of the Academy of Motion Picture Art and Sciences, gave a speech that stressed the importance of diversity in cinema.

"Tonight is proof that art has no borders, no single language and does not belong to a single faith," she said. "The power of art is that it transcends all these things."

While introducing the nominees for Best Animated Feature, "Mozart in the Jungle" star Gael García Bernal did not miss out on his opportunity to slam Trump's proposed Mexican border wall.

"As a Mexican, as a Latin American, as a migrant worker, as a human being, I am against any form of wall that wants to separate us," García Bernal said.

The biggest slam of the night came from the mind of Asghar Farhadi, but the lips of Anousheh Ansari, the first Iranian to go into space, who accepted the Oscar for Best Foreign Language film on Farhadi's behalf. According to the statement Ansari read, the "Salesman" director decided to skip the Oscars "out of respect for people in my country and those of other 6 nations that have been disrespected by the inhumane law that bans immigrants from entrance to this nation."

"Dividing the world into the 'us' and 'our enemies' categories creates fear — a deceitful justification for aggression and war," his statement continued.

Of course, the funniest jab at Trump came in the middle of the show when Kimmel expressed concern that the President had not tweeted about the show yet. "We're more than two hours into the show and Donald Trump hasn't tweeted about us once," Kimmel said while mocking Trump's Twitter addiction. "I'm starting to get worried about him."

Hey @realDonaldTrump u up?