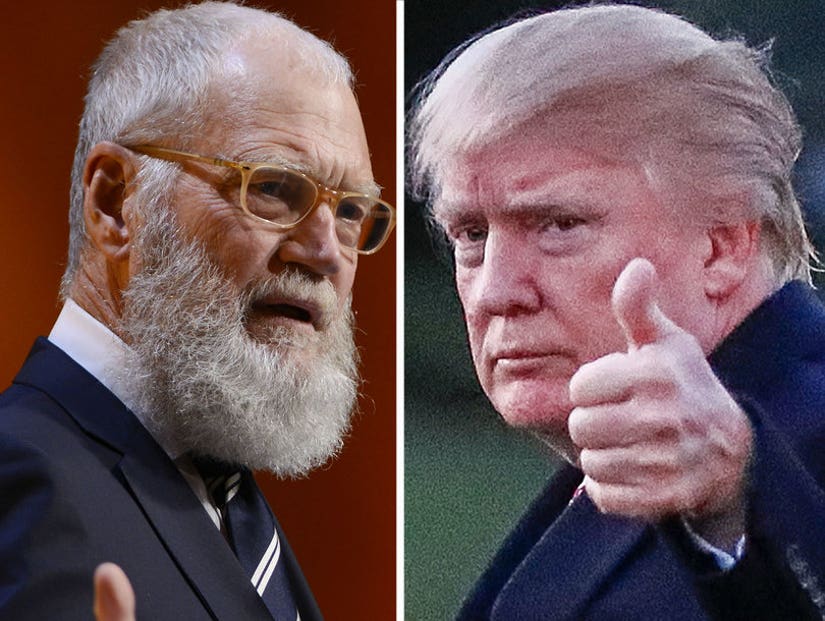 "He was a joke of a wealthy guy," Letterman said about interviewing Donald before his retirement. "We didn't take him seriously. He'd sit down, and I would just start making fun of him. He never had any retort. He was big and doughy, and you could beat him up. He seemed to have a good time, and the audience loved it, and that was Donald Trump."

"I'm tired of people being bewildered about everything he says: 'I can't believe he said that,'" Letterman said. "We gotta stop that and instead figure out ways to protect ourselves from him. We know he's crazy. We gotta take care of ourselves here now."

"I do like the idea that Putin has something on Don and decided: 'Let's get him in office, and we'll get things to go our way.' That's beginning to sound like an Alex Jones theory, but that'd be fun, wouldn't it?"

"Comedy's one of the ways that we can protect ourselves," Letterman explained. "Alec Baldwin deserves a Presidential Medal of Freedom. Sadly, he's not going to get it from this president. In a 2007 playoff game, a swarm of midges from Lake Erie caused Yankees reliever Joba Chamberlain to blow the game with a few wild pitches. Well, that's Alec Baldwin and 'Saturday Night Live.' It's distracting the batter. Eventually Trump's going to take a fastball off the sternum and have to leave the game."

He fears controversial figure Steve Bannon, adviser to the president

"Bannon looks like a guy who goes to lunch, gets drunk, and comes back to the office," Letterman said. "'Steve, could you have just one drink?' 'F--k you.' How is a white supremacist the chief adviser to our president? Did anybody look that up?"

He's glad he's not on late-night for this political storm

"This," he said, referring to his rhetoric about the current administration, "is the way I'd be every night, and the next thing you know, I'd be slumped over in my chair and that would be it."

He doesn't think Twitter's so bad ... but there's a catch

"If we get a president sometime soon who does not have a mental disorder, Twitter will be useful," Letterman said about the president's penchant for offensive Twitter missives.