Britney Spears and beau Sam Asghari are a match made in six-pack heaven.

The couple put their equally-impressive physiques on display in a new video on the singer's Instagram page on Thursday, showing the two in their swimsuits while messing around in her pool. In the clip, a yellow bikini-clad Britney stands atop Asghari's incredibly sculpted shoulders, before jumping off. 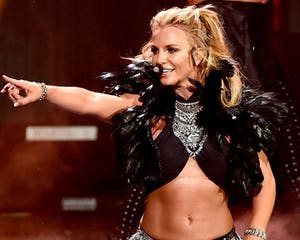 This latest clip is just one of a few sightings of the two together since they met on the set of Spears' "Slumber Party" music video last year.

Asghari, 23, slipped the 35-year-old performer his number after working together on the video.

"I kept his number, and it was so weird, it was like five months later, and I found his number in my bag. I was like, 'He is really cute. This guy is really cute.' So then I called him, and ever since then, he is just a really fun, funny person," she explained.

Take a look at one of his recent shirtless Instagram photos below, safe to say she made the right call.