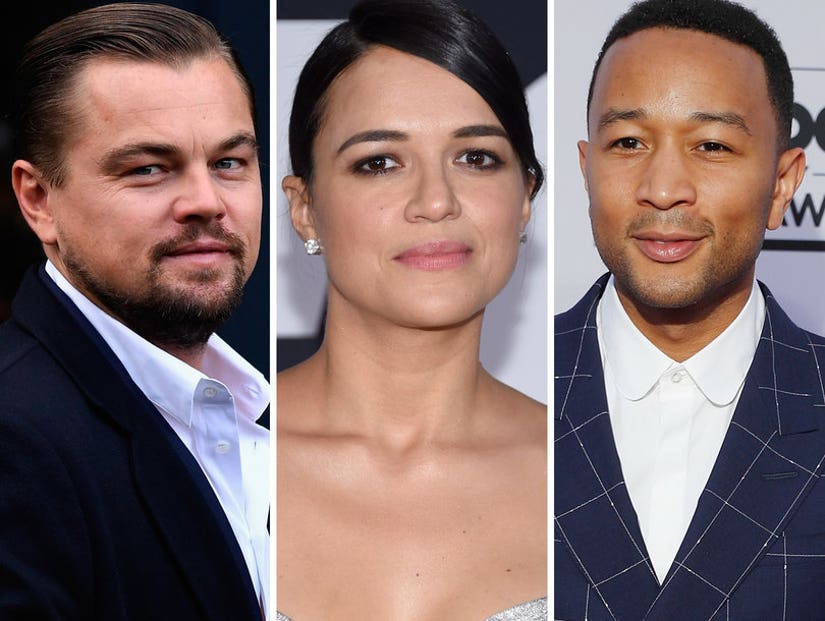 President Donald Trump announced Thursday that the U.S. would officially pull out of the Paris climate agreement in a formal press conference.

Back in 2015, 195 countries signed on to the pact, which was created to reduce greenhouse gas emissions that cause climate change namely higher global temperatures that ultimately lead to dangerous weather effects like storms and major droughts. The agreement signaled a turning point in which the world was charting a course for a low-carbon economy.

Since Trump announced the U.S.'s withdrawal from the agreement, many celebrities have taken to Twitter with sharp backlash of the announcement.

U.S. chooses not to stay in Paris accord. The “Losers?” Everyone on Earth. Sad. https://t.co/wYUB9OY7hM

So Kathy Griffin is more harmful to Barron Trump than global warming. Got it.

Trump is having the U.S. pull out of the Paris Climate Accord. Too bad someone didn't tell his father that he shoulda pulled out, too.

Today, our planet suffered. It's more important than ever to take action. #ParisAgreement https://t.co/FSVYRDcGUH

Trump is our national embarrassment.

We have to stop this asshole. This is urgent. You have to vote in 2018.

Hey @weatherchannel — I see you.

Trump just worried that the world was laughing at us. True. They have been since the escalator ride. But today...today God cried.

Trump alienates allies, walks away from #ParisAgreement & sabotages health care. His presidency is all destruction & no accomplishments

They breathe. They lie. https://t.co/LiuzsfoscF

He loves the ocean so much he's gonna give us a lot more of it to appreciate.https://t.co/VFHX2Tx2cZ

We're already feeling impacts of climate change. Exiting #ParisAgreement imperils US security and our ability to own the clean energy future

. @realDonaldTrump I ask humbly to remember your children, their children & all children will be left to live w/the results of your decision pic.twitter.com/dnYQ2dH4Cz

Trump just committed a crime against humanity. This admitted predator has now expanded his predatory acts to the entire planet. #ParisAccord

It'll be great to see all the economic progress in blue states & cities that continue to embrace science & the Paris deal.

Trump is stone cold stupid. That's right @realDonaldTrump is an intellectually impotent little man who needs to b impeached #ParisAgreeement

We are deeply disappointed that the United States federal government has decided to withdraw from the Paris Agreement.

Couldn't a clown with a giant hook come though the Rose Garden and snatch this puffed up, retrogressive, ignoramus away from that podium?

all the world feels this - god save america - we r fucked #resist #PROTEST #REMOVETRUMP https://t.co/aTRdhpKSHx

Trump's decision to withdraw the US from the Paris climate agreement is an abdication of American leadership and an international disgrace.

Wow. Of all the backward, boneheaded decisions this one is the most destructive. #parisclimateagreement

I'm guessing that Donald Trump doesn't see the irony in making his announcement to leave the Paris Agreement while standing in a garden.

Literally, the moment you were elected.

America your president is out of the flow big time. If only our world leaders would realize that beyond all borders, we are one earth.

It's just one fucking DISASTER after another. Every week I say 'I'M DONE!' The following week a new low is reached. Trump redefining bottom

Am departing presidential councils. Climate change is real. Leaving Paris is not good for America or the world.

I am truly apoplectic! Can he really be this greedy? This much a pawn? This uninformed!!! https://t.co/2ID0macOHD

My statement on Today's Decision by the Trump Administration to Withdraw from the Paris Agreement: https://t.co/eDEFv5b1nS pic.twitter.com/SzHJU3D0Mr

We need to organize our unions, retirement plans, stock accounts to pull out of all fossil fuels. We will have to lead our Gov. with our $.

As the Mayor of Pittsburgh, I can assure you that we will follow the guidelines of the Paris Agreement for our people, our economy & future. https://t.co/3znXGTcd8C

There has never in US history been such a destructive megalomaniac in the WH. Thank you to US press and other numbskulls who put him there.

Withdrawing from the #ParisAgreement will be devastating to our planet. Paris and Pittsburgh share the same environment after all. pic.twitter.com/QNO5vHtmEF

A neurotic megalomaniac just stepped on his own dick in the parking lot.Each governor, mayor,state assembly can ignore this & accept Paris