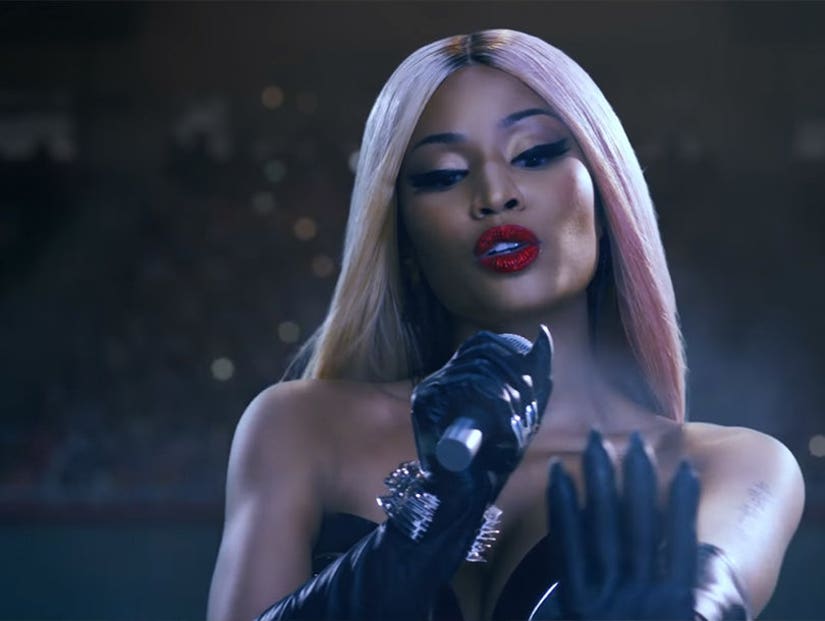 It's been almost a decade since Nicki Minaj exploded onto the music scene, and she's managed to rack up a stunning 76 collaborations, the latest of which dropped Friday -- "You Already Know" by fellow powerhouse Fergie. But music industry experts say Nicki's undeniable success is not solely based on her ability to effortlessly spew famously crass sass.

According to three music industry experts TooFab spoke with about the incredible amount of tracks on which Minaj has dropped verses, there are several factors in play. Perhaps the most important, though, is her team. JB of The Track Burnaz -- a team that's produced tracks including Big Sean's "Inspire Me" and Future's "Use Me" -- said the people who manage her career are "everything."

"They're the ones who are getting her the plays, getting her the collaborations, if you will," JB told TooFab. "She's got a great camp of writers, producers, stylists. She's also a sex symbol. Women look up to her and how she presents herself." 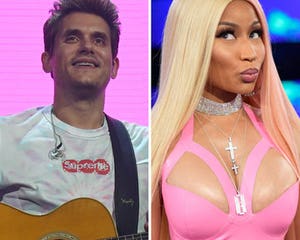 JB thinks Minaj has a monopoly over the female rap game; even those who could be considered equivalents -- like Azealia Banks or Remy Ma -- can't compete with Minaj's crossover appeal.

"The types of songs and type of collaborations Nicki's done are very universal," he explained. "Her reach is bigger than someone like Azealia Banks or Remy Ma. Remy Ma is all the way hip-hop, all the way urban, so her demographic is not as huge as Nicki's."

"No one has the recognition and mainstream appeal that Nicki Minaj does," Halperin told TooFab. "She can also be very street and very almost underground hip-hop, so she rides both lanes, which is very unusual and speaks to her sort of ubiquitous-ness. That's why you hear her on so many tracks and so many different kinds of tracks from the biggest pop stars to the most credible rappers. I think the combination of those two things is really what drives us home. She's really in a league of her own. There's just no one out there who has the skills and the pop sensibility and the sort of drive to make sure that her rhymes are everywhere." 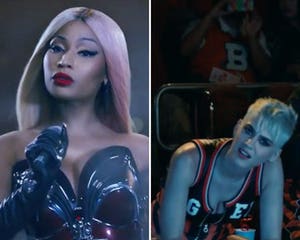 Minaj is a 10-time Grammy nominee and has had 28 hits on Billboard's Hot 100 chart. Of the 117 tracks Nicki has recorded, a whopping 76 are collaborations, and that doesn't include any of her mixtapes released before the rapper signed with Lil Wayne's Young Money Entertainment, a subsidiary of powerhouse record label Republic.

"Someone like Nicki Minaj and also someone like Snoop Dogg -- they're very sort of democratic about who they do features with, and they really do a lot of them," Halperin said. "Sometimes it's like swapping favors -- you guest for me, and I'll guest for you -- but the people who are smart about it I think say yes more than they say no. And I think Nicki falls into that category."

Prior to Minaj's Friday release with Fergie, the singer's most recent alliance was with Katy Perry on the polarizing pop single, "Swish Swish," which critics have slammed since its debut in May. The duo even took the stage at this year's MTV VMAs to perform the song, and we echo Twitter users everywhere when we say #TGFN (Thank God For Nicki). 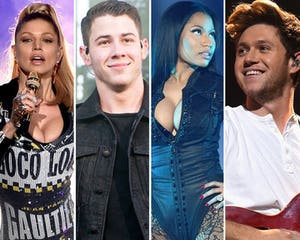 13 Songs You Gotta Hear on #NewMusicFriday

Though reactions to Perry's embattled track and accompanying video were fairly negative, there was widespread agreement that Minaj was the best part and saving grace of "Swish, Swish."

"['Swish Swish'] is a random grab bag of Perry's vocals, obnoxious voice-altering effects, and piano flourishes, all laid over a house-inflected beat from the British producer Duke Dumont that suspiciously resembles Minaj's three-year-old 'Truffle Butter,' a recent Spin review stated. "Nicki's verse, for what it's worth, is the bright spot: She shouts out pink pool slides from the under-rapped-about brand Salvatore Ferragamo, name-checks Migos (who featured on 'Bon Appetit'), and references her feud with Remy Ma ('silly rap beefs just give me more checks'). She even sings two of her lines, probably the maximum possible without totally showing up Perry on her own track." 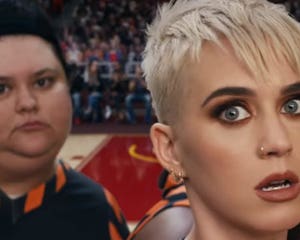 Jeremy Skaller -- a music producer and manager who has worked with Minaj in the past -- made sure to emphasize that while her team, mainstream appeal and choices are important, no one can discount her talent as a driving factor in her massive success.

"She's a beast of an MC, one of the greatest that I've ever come across," Skaller told TooFab. "She's just super-duper talented. It starts there. And she hasn't had sort-of success for a decade; she's been winning for a decade. She's been a powerful woman in a business where there are few."

Indeed. Here are all 76 of Minaj's collaborations to remind just how much winning she's done in less than a decade. 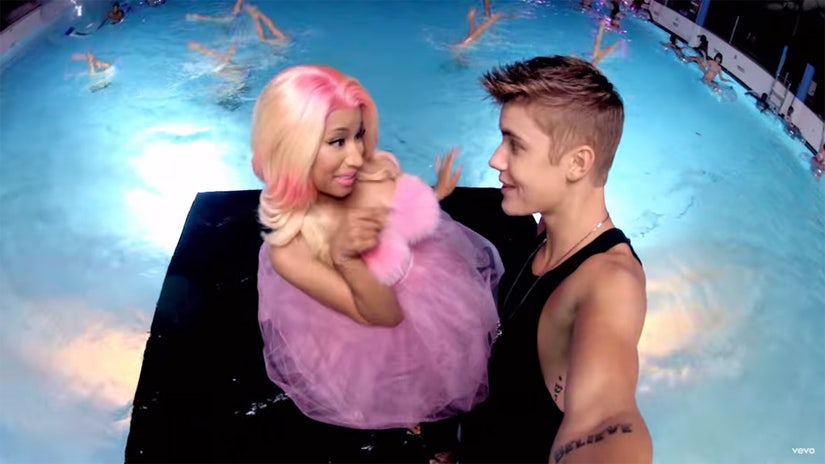 "The Boys" - Nicki Minaj and Cassie 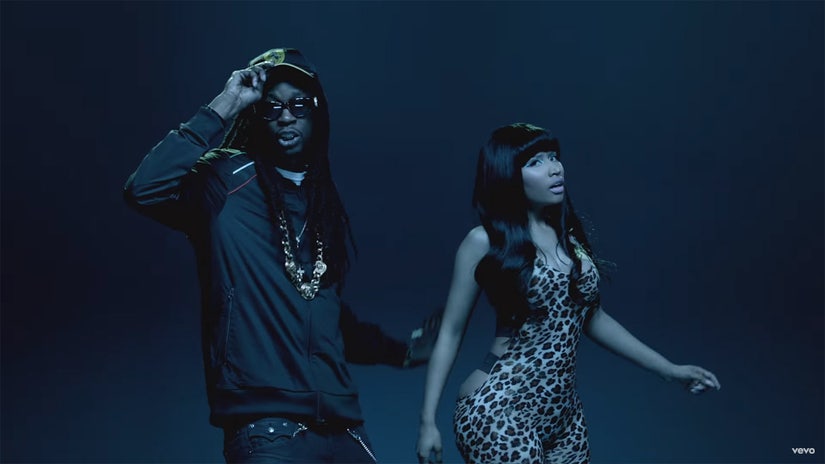 "Check It Out" - Nicki Minaj and will.i.am 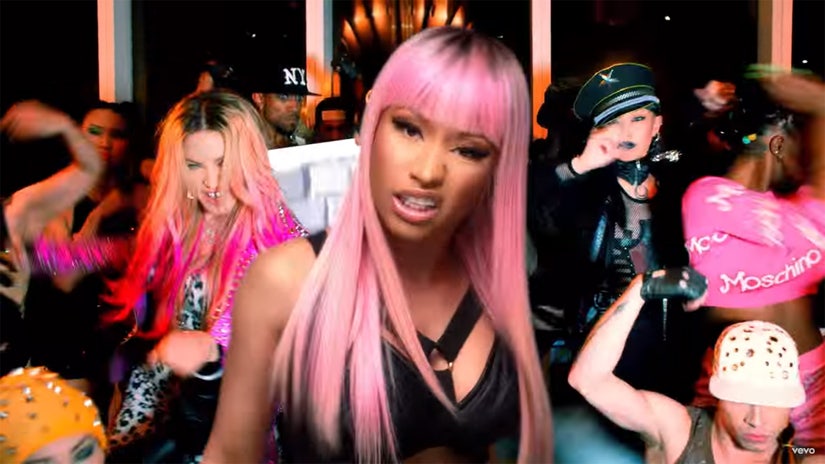 "Get It All" - Sean Garrett, featuring Nicki Minaj 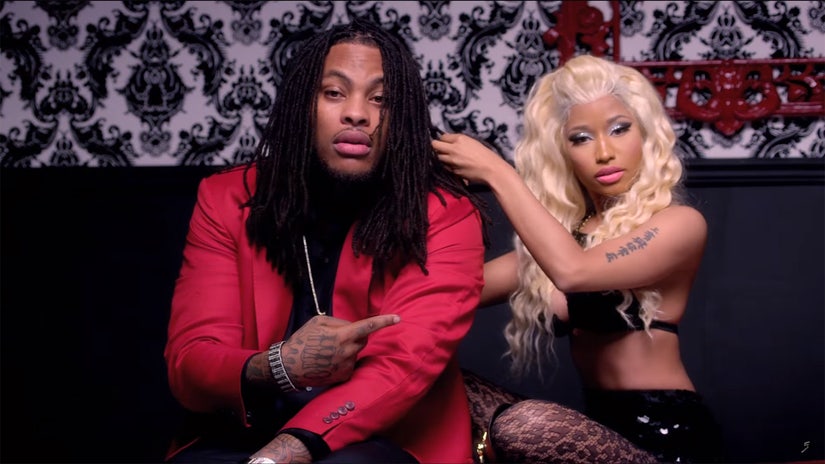 "Get On Your Knees" - Nicki Minaj, featuring Ariana Grande

"Give Me All Your Luvin'" - Madonna, featuring Nicki Minaj and M.I.A.

"I Am Your Leader" - Nicki Minaj, featuring Cam'ron and Rick Ross

"I Don't Give A" - Madonna, featuring Nicki Minaj

"I Endorse These Strippers" - Nicki Minaj, featuring Tyga and Brinx

"Rake It Up" - Yo Gotti and Mike WiLL Made-It, featuring Nicki Minaj

"Right By My Side" - Nicki Minaj, featuring Chris Brown

"Side to Side" - Ariana Grande, featuring Nicki Minaj

"Up Out My Face" - Mariah Carey, featuring Nicki Minaj 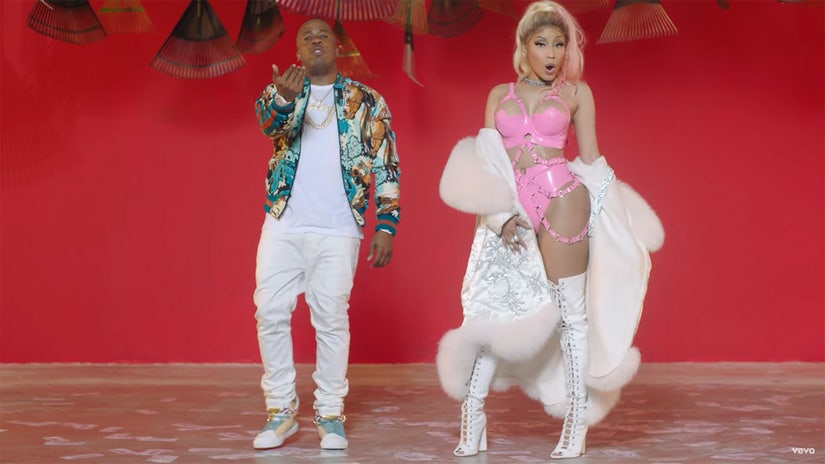 "Where Them Girls At" - David Guetta, featuring Flo Rida and Nicki Minaj