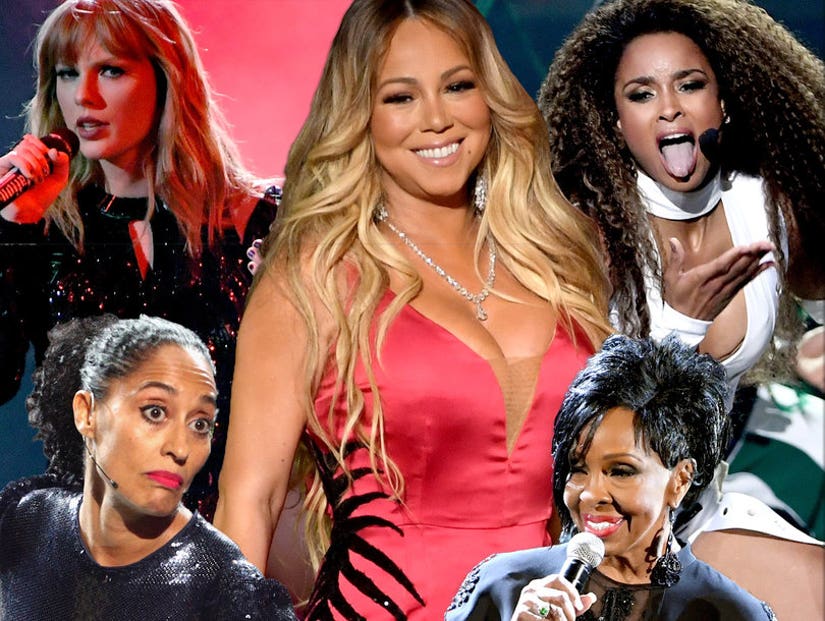 If you didn't tune in, we've got you covered -- here's every moment that blew up social media!

The hottest names in music were ready to get wild on Tuesday night at the 2018 American Music Awards.

Hosted by Tracee Ellis Ross for the second year in a row, the show was a hot one -- filled with performances from Taylor Swift, Jennifer Lopez, Camila Cabello, Mariah Carey, Cardi B, Post Malone, Carrie Underwood, Halsey, Ciara and Missy Elliott and so, so many more. 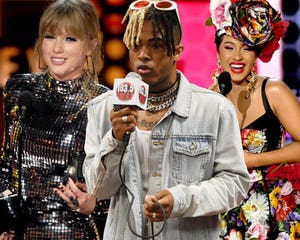 There was also one helluva tribute to Aretha Franklin led by the one and only Gladys Knight, appearances from presenters including Amber Heard, Macaulay Culkin, Ashlee Simpson-Ross, the guys of "Bohemian Rhapsody," and one singer made history by beating a record previously held by Whitney Houston.

Here's what everyone was talking about on social media.

Taylor Swift Kicks Off the Show

Fresh off of pledging her allegiance to the resistance, Taylor Swift opened the show with a fiery performance of "I Did Something Bad."

Sporting a sparkly leotard, Swift slithered across the stage as she sang her vengeful track. She brought some choreography with her and one very angry face -- check it out above and some of the social media reaction below.

taylor every time someone called her a republican pic.twitter.com/eQ0OFB5qdQ

I'm so emotional rn.. @taylorswift13 did not come to play

I fuck with Evil Taylor.

This was one of Taylor's career defining performances. She is a true entertainer and she tonight she showed everyone why her tour is the biggest of the year. #AMAs

The "Black-ish" star followed up Swift's performance with one of her own, as she showed off some major moves to a medley of random hits including "Bodak Yellow," "This Is America," "Respect" and Beyonce's "Run the World."

Not only did she pick up the choreography between filming scenes for her ABC show, but she also rapped a bit while rocking a grill in her mouth reading "TER," her initials.

Tracee Ellis Ross brought T-MURDA to the #AMAs!
I'm crying. She is truly the best and should host everything. pic.twitter.com/vuJfkEWCJv

Not to mention, Tracee is literally dancing with some of Bey's actual dancers straight off the tour. 🙌🏾🙌🏾#AMAs #GlobalGrindAMAs pic.twitter.com/O8tsPkIgsZ

I have no words for how amazing Tracee Ellis Ross is. #AMAs pic.twitter.com/5bdndjbYkW 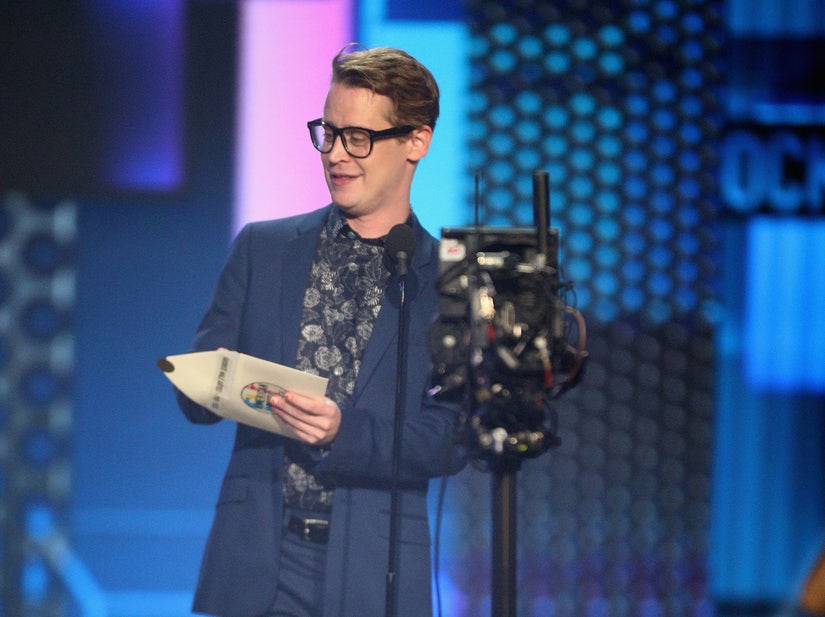 One person nobody was expecting to see at the awards on Tuesday night: "Home Alone" star Macaulay Culkin.

The former actor was one of the presenters of the night, looking sharp in a blue suit, flower print shirt and black framed glasses.

He really didn't do anything noteworthy except just be there, that was enough to set off social media.

Were definitely not expecting Macaulay Culkin to be there. #amas pic.twitter.com/D6WZeHx10m

Wait, how old is Macaulay Culkin? How old am I?? #AMAs pic.twitter.com/RFZIK3PQMv

Had no clue the AMAs were on..turn it on and Macaulay Culkin aka Kevin Mccalister is the host?! pic.twitter.com/qiUcBl5V5i

Where they pull Macaulay Culkin from? #AMAs pic.twitter.com/kdWdnvqY6j 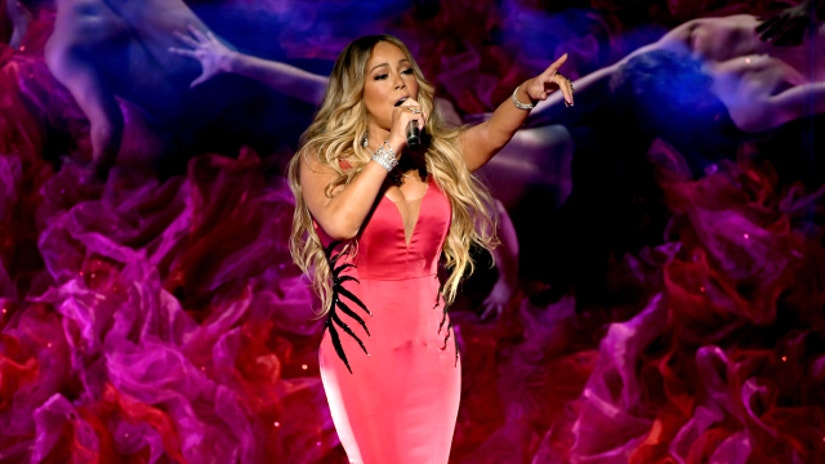 Mimi popped up to give the debut performance of her latest single, "With You," during the telecast.

Wrapped in a hot pink dress that hugged all her famous curves, Carey belted out the slow jam while surrounded by an army of dancers and even more tulle.

She looked and sounded amazing, even if the performance wasn't all that energetic.

Mariah is the laziest performer I've ever seen in my life.. lmbo.. she has only moved one arm. #AMAs

MELISSA SAID NO SLIP UPS IN 2018 GOODBYE MARIAH DID SO WELL THAT WAS EXCELLENT pic.twitter.com/5BbZ2eDLQ9

Okay then Mariah! Put some respect on a LIVING LEGEND! #AMAs pic.twitter.com/QkqQ7DV7C3

Great to see Mariah have actual theatrics on stage. Just wish the song brought as much drama 🤷🏾‍♂️. #AMAs

Cardi B brought the fire as she sang "I Like It" with Bad Bunny and J Balvin, but the over-the-top performance left at least one audience member confused.

While the trio rocked out on stage, the camera cut to "Saturday Night Live" alum Taran Killam in the front row, mouth agape in total shock.

Was it a bit? Was he honestly surprised? Likely the former, but his face quickly became a meme.

Taran Killam's face during Cardi B'a killer performace is the best thing to come from this show #amas pic.twitter.com/uTeZZaMq35

um, taran killam during that “i like it” performance was perfect. and damn, how did cardi have a kid only 3 months ago 🔥 #AMAs2018

taran killam in the audience pic.twitter.com/YbWnJcPhU5

What the hell was Taran Killam doing?

That guy face during Cardi B's performance. He was SHOOK LMAOOOOOOO. #AMAs pic.twitter.com/MVvU6TrRAd

That face you make when it's he first time you hear a song by Cardi and you like it like that #AMAs2018 pic.twitter.com/wCFzegvlY9

Yes, Halsey Was Really On Her Phone

When Halsey, Benny Blanco and Khalid hit the stage to perform their hit, "East Side," they did it in a very non-traditional way.

The stage was set up to look like a full on studio jam session, walls and all. As Khalid began the song, Halsey and Benny sat on the a velvet couch on the stage, Halsey nonchalantly on her phone until it was her time to sing.

And yes, she was actually scrolling through Twitter, live on TV when she did it.

On stage right now at the AMAs. Wearing my favorite Jordans lol. Tweeting during my performance. #priorities ❤️

"Young people of America, the biggest election of our lifetime is happening," he said into the mic. "Tonight is the final night to register in 20 states in this country. Please grab your friends, tell them to vote"

"Now is the time. If you believe in equality for women – that's right -- for people of color, for the LGBTQ community, if you believe that climate change is real and that we need to do something about it," he added. "Don't let anyone tell you your vote won't count! It counts."

He ended his plea by giving a shoutout to Taylor Swift for urging her fans to do the same.

The rapper's mother, Cleopatra, was on hand to collect his award, stepping up on stage in all black.

Tearing up, she told the crowd, "I am honored to accept this award on behalf of my son. I would like to thank the AMAs, his fans and everyone who made this possible. Thank you guys so much, I appreciate it."

XXXtentacion was killed during a shooting in Florida, he was 20.

Just when the show was starting to lag, Ciara blew onto the scene and broke it down on stage better than anyone else all night.

The amazing dancer rocked out to "Level Up" and had everyone in the audience in awe. She was giving us major Janet vibes as she absolultely slayed her performance.

Missy Elliott joined her on stage and Missy's "Funky White Sister" was even spotted in the audience living her best life (see below tweet).

Ciara Got Me On The Mood #AMAs pic.twitter.com/eb63uftdHd

People really don't give Ciara enough credit. She really is an amazing performer like it's unbelievable! #AMAs pic.twitter.com/UiT00WRfL8

Can I be @Ciara when I grow up? #AMAs pic.twitter.com/ZKuKqU2i9K

YAAAAAAAAAAAAAAAAAS CIARA !!! That has to be the best performance of the night, you killed it girl !!!! CIARA IS BACK !! #AMAs pic.twitter.com/KT2xyl0LOx

Standing fucking ovation for the queen herself @ciara. You did wonderful fave👏🏽👏🏽👏🏽👏🏽👏🏽 #AMAs

. @Ciara JUST annihilated the stage! That was A1! Easily performance of the NIGHT! #AMAs

Taylor Swift made history by breaking Whitney Houston's record for the most wins by a female artist when she was given Artist of the Year. During her speech, she not only thanked her fans, but urged them to vote again.

After saying this trophy represents "encouragement and motivation for me to be better, work harder and try to make you guys proud as I possibly can," she got political.

After the MTV Video Music Awards really dropped the ball when it came to its Aretha Franklin tribute by bringing Madonna in to ramble about herself, the AMAs were determined to do it right. And that they did.

The show ended with a lengthy tribute to the late, legendary singer, which included performances from Gladys Knight, Ledisi, Mary Mary, Donnie McClurkin and CeCe Winans.

THIS was the performance that got everyone up on their feet and brought down the house. 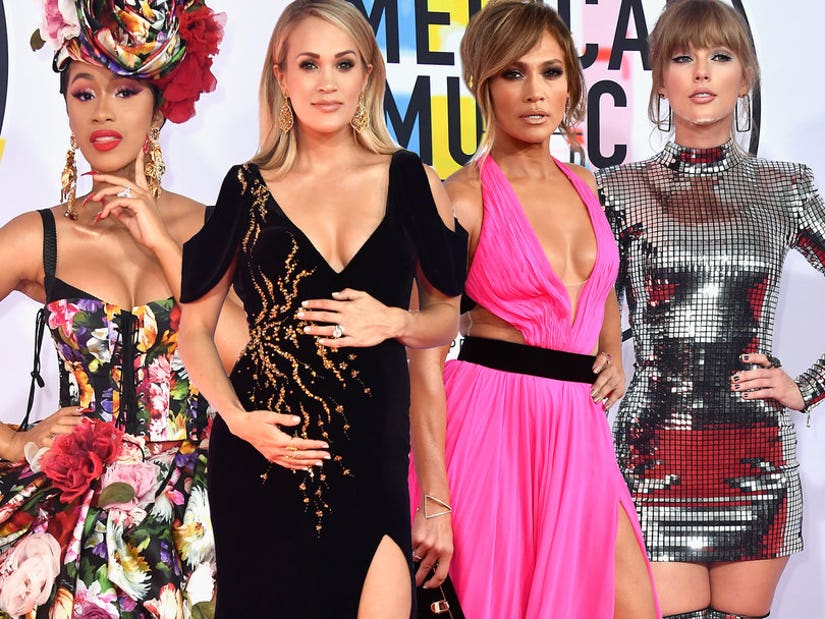