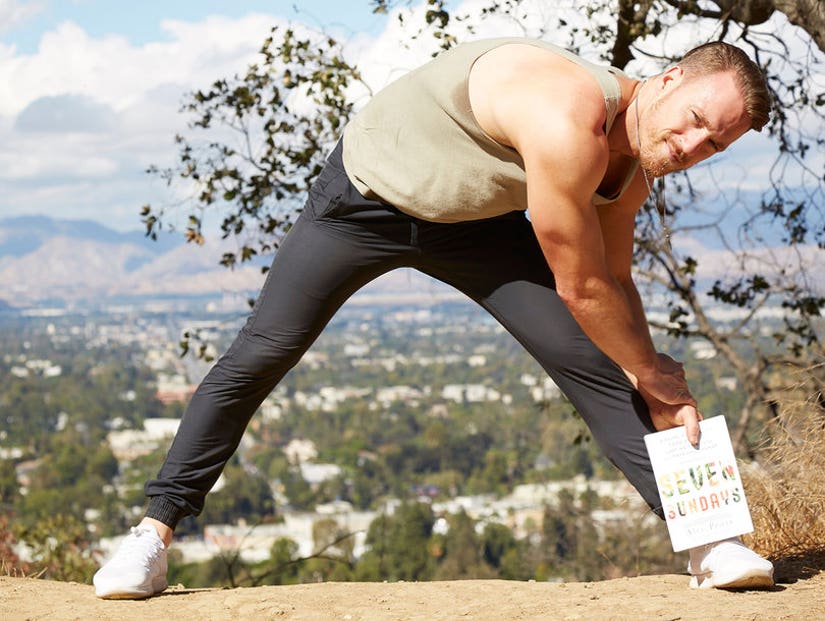 Penix tells TooFab about his new lifestyle book and a few key tips to keep in mind before making those New Year's Resolutions.

For some people, working out is their religion, but celebrity trainer Alec Penix is taking that idea one step further with a new plan that straddles the line between the spiritual and the physical.

Penix's celebrity clientele includes shredded stars like Olympian Gabby Douglas, "Dancing with the Stars" alums Derek and Julianne Hough and even Shawn Mendes. But with his new book, "Seven Sundays," he's hoping to reach an even larger audience as he brings faith into fitness.

While Penix has been a Hollywood trainer for years, he was born again after a spiritual awakening a few years back -- more on that in a minute. That transformation found its way into his training sessions, something which struck a cord with client and publicist Jay Schwartz. Seeing an opportunity for Penix to "help other people," Schwartz pitched him the idea of a book, they took that pitch to Simon & Schuster and the rest is history.

The result is a six-week program that promises "a meaningful journey that will finally connect your body and spirit."

TooFab caught up with the trainer to talk about his spiritual awakening, as well as some helpful pointers from his book as we head into the holiday season. Check out our full Q&A below -- "Seven Sundays" is available now on Amazon.

Spirituality and faith haven't always been a part of your method, right?

It wasn't for a long time, until I found God. I was in Mexico celebrating a wedding and the night before -- I'll let you read in between the lines on that one -- I woke up the next morning or I think it was evening, laying in bed, I was not feeling great. That's probably one of the darkest times in my life. I had people in the wedding party knocking on my door and I had them calling me, trying to get a hold of me but I did not want to talk to anybody because I was in a bad place. I told everybody that this was the first time I ever prayed out loud, and I heard a voice after that and that voice said to me, "Alec it's time to become the man I've called you to be."

Since then I've just been on fire to go through this spiritual transformation. That was like my spiritual awakening with God, and I don't say that to preach that you have to be religious in order to feel fulfilled. It was for my transformation, but because of my life and my own life transformation, it started filtering into everything that I did, especially in my business. That passion, that enthusiasm, kind of filtered into my clients and I began to see that their life began to change on an emotional mental and spiritual level as well. That's when I knew there was something special happening here and it wasn't something I was forcing on them, like this religious thing. It was an organic passion I had for life, finally. I wasn't spiritually malnourished anymore, I had a full tank inside of me.

When you are bridging that gap between fitness and faith, what do you see as the biggest challenges and biggest reward?

The biggest challenge is I think the awareness of understanding that you're much more than just physical; you are body, mind and spirit. And so, once we have that awareness of what's going on inside of us, we can start strengthening that spiritual being, the emotional aspect as well as be physical and tie all those things together and that's really how to become the best version of who we are.

And the biggest reward is the energy and the enthusiasm and the passion that we get from that shift of exercise goes from a tool to look good to being a tool to feel good, to be our best.

Have you seen a change in your clientele since this marriage between faith and fitness?

I think that I have seen a little shift in terms of my clientele just now. It was more celebrity-heavy before I found God, but now I really encompass everybody, all walks of life and I really get a lot of empowerment from that. Believe me, I love training celebrities, getting them ready for movies, to be on stage, all that, but I also love to see people change their life because of the transformation, because of the relationship they have with me. In a sense, I think that it has broadened me, my understanding, my horizon to everybody, in saying, oh I personally have something to give, not just to celebrities or athletes but to everybody.

Was there anything new that you discovered about yourself while working on the book?

Oh yes. I've been so stretched out of my comfort zone through this whole process, that even through the journey of writing this book and the whole process of giving birth to it has made me a better person, has made me a stronger person. I have more faith in myself and so I think that really is a reflection of what I'm asking people to do in the book is by pushing themselves out of their comfort zone and to find out what's inside of them and to understand that they are much more than they could ever imagine.

We're in the holiday season, people are preparing their New Years resolutions, what's something people should keep in mind when they're going into 2019?

Embarking on any type of journey or whatever it is, is a big undertaking to have. So, whenever you are beginning something like Seven Sundays, I always like to ask people, "What is your 'Why?' Why are you going to start this journey?' Once you have a better understanding of that, you have that motivation to push you through and to persevere when things get difficult.

What's one small step people can take in the right direction that maybe often gets overlooked?

In the first chapter of my book or the first week of my book, I have a, it's called 'Illumination Week' and that's bringing awareness to everything, what's going on emotionally with you, being aware of eating habits, being aware of your sleeping habits. Bringing awareness first to the situation, then from there being able to say, 'Oh, this is where I want to go, this is my outcome.' Having that -- first the awareness and then the focus and the clarity -- is key to any success pattern, any success journey to start.

We were creeping on your Instagram and saw a picture of you with Shawn Mendes, Mark Ballas and Drake Bell. When you have that much star power in one workout, does it change the feeling in the room at all?

For me, honestly no. Because I've been around it for so long now, it's just like training a regular person and I think that's one of the reasons why I have that successful business. I think it gives them an opportunity to sort of let their guard down, knowing that they're coming in for a workout and not have to be 'on' like they are always. I can sort of lead the way and guide them and they can just turn it off and feel good afterwards. I want to go in there and give them the best experience they could possibly have.

Do you have a last message for everyone reading?

I just want people to understand that anything is possible, don't pay attention so much to your failure and your past, but focus more on changing your future by not paying attention to your negative past, focusing on the times that you have succeeded and start implementing that into your future. Adopting that 'Anything is possible' mindset will empower you to take on something like this. This is the perfect time, January 1st is the perfect time to start fresh, to start new. And to know that you are capable of changing anything you're not happy about. We all have the power within us.