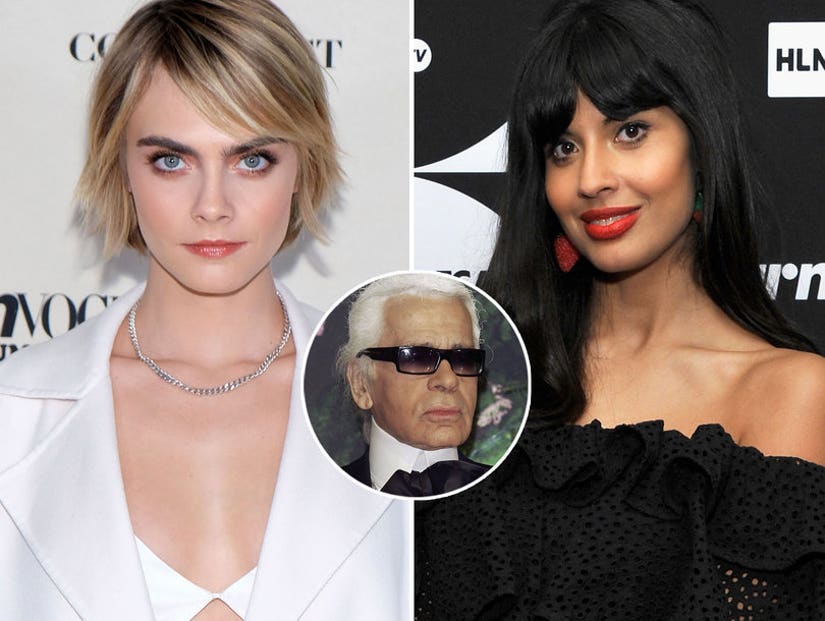 Cara Delevingne found herself defending her tribute to the late Karl Lagerfeld, after "Good Place" star Jameela Jamil and others on social media brought up the designer's problematic past.

Lagerfeld passed away at the age of 85 on Tuesday, leading to a number of tributes from A-list stars praising him for his work in the fashion industry. But not everyone was on board with celebrating him after his death, the most vocal being Jamil, who shared an article urging people to "Stop Mourning Oppressors."

In a piece written by Lara Witt, the reporter called out Lagerfeld for being an "islamophobic, racist, misogynistic, fatphobic rape apologist" and pointing out his history of controversial comments on topics including weight and the #MeToo movement. Jameela shared it, writing, "I'm glad somebody said it. Even if it is a little soon. A ruthless, fat-phobic misogynist shouldn't be posted all over the internet as a saint gone-too-soon. Talented for sure, but not the best person." 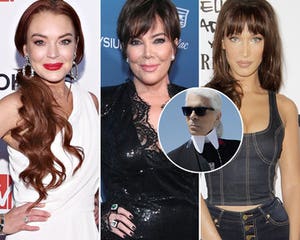 Delevingne -- one model who honored Lagerfeld herself on Instagram -- responded in a now-deleted tweet, saying, "You are calling him ruthless??? Are you kidding me? No one is perfect but you clearly don't know the man so please keep your opinions to yourself and stop bashing people for attention."

After removing the comment, the two then had a respectful back and forth about Lagerfeld, his past and how to reconcile some of his controversial moments with more positive memories.

First, Cara tweeted to her followers, "Everyone has their own opinion and I felt the need to voice my own. All I want is for everyone to love each other no matter what. Just please understand that it's an extremely emotional time and we must try use love instead of hate." She added, "All of these things should have been addressed while someone is living, not the day after someones death."

Then, the following conversation played out between the two stars on Twitter, a conversation Cara said she was "glad" they could have "without trying to attack each other."

I didn't find you offensive. I just think it hurts a lot of fat people, and people who he was racist about, and people who were affected by his toxic misogyny, to see someone like that hailed as if he was a saint. We have privelege so he was nice to us. He hurt a lot of people.❤️

Honest yes and this should be a general dicussion which should be spoken about outside of just him. He is not the problem. The way the world is... and the way the industry has been for a long time. It's time for change and I agree with that

You can not compare Harvey to Karl! Especially to me

I agree but what you are saying you must understand is upsetting me greatly. I am grieving someone who was special to me. It's very tough to have this conversation without getting emotional.

I am glad that we can have this open conversation without trying to attack each other, it's just very raw for a lot of people, me included. I am going to step away. I am sending nothing but love and I hope you feel the same

100 percent, sorry to hurt you and the others. That wasn't my intention. All I did was bring up how he hurt so many others. I wasn't just attacking him. Take care, and see you around. ❤️❤️❤️❤️

And I am asking you consider all the people without your privelege who he talked about as if they weren't human beings with feelings, worthy of any respect. Whether he was your friend or not. I'm sorry Cara, but I just answered you honestly and as respectfully as I could. ❤️

Thank you. I only went on twitter because a lot of people close to him were so hurt by what you said so I had to say something. Everyone is entitled to their own opinion and I respect that. Sending you love and best wishes in return. Just asking for some sensitivity at this time

A lot of people said the same thing as me yesterday, But I'm the only one with my profile who spoke out for those whose voices are so constantly ignored when famous white men hurt them. I really am sorry for your personal loss and I like you very much, and I'm glad we spoke.❤️

The conversation continued in a separate thread, going off of Delevingne's comment about the industry in general:

But for sure we should talk about the industry wide fat phobia, racism, sexism and sexually inappropriate environments for young girls and boys. I would LOVE it if you would talk about that with your platform size. It would be explosive. Sending you love mate. ❤️

I'm here if you ever want back up to talk about this publicly. I could interview you. We could do it together. Thanks to the internet it doesn't take much time. Happy to help. So let me know. ❤️

In yet another thread -- sorry, there were a lot of tweets here -- the two continued their debate:

Again, we can't chalk decades of abusive rhetoric towards minorities as “being human” or “ making mistakes” doing it once as a joke and then apologizing is one thing, doing it again and again in spite of public outcry is a bad human. I'm sorry to speak ill of someone you love. ❤️

But cara, his cruel words weren't directed at you because you're thin, and white, and incredibly privileged. So you don't feel the pain of his bad behavior. There is never a good time to talk about this really. So much glory to someone who punched down, frequently. I'm sorry. X

After the conversation played out, Jamil responded to another outlet and how they characterized the debate, instead saying it was a "completely adult and kind exchange."

"She could not have been more lovely, polite or empathetic in our completely adult and kind exchange," tweeted Jamil. "Stop trying to make women look hysterical as if we are incapable of intelligent discourse... @Caradelevingne This is not a cat fight."