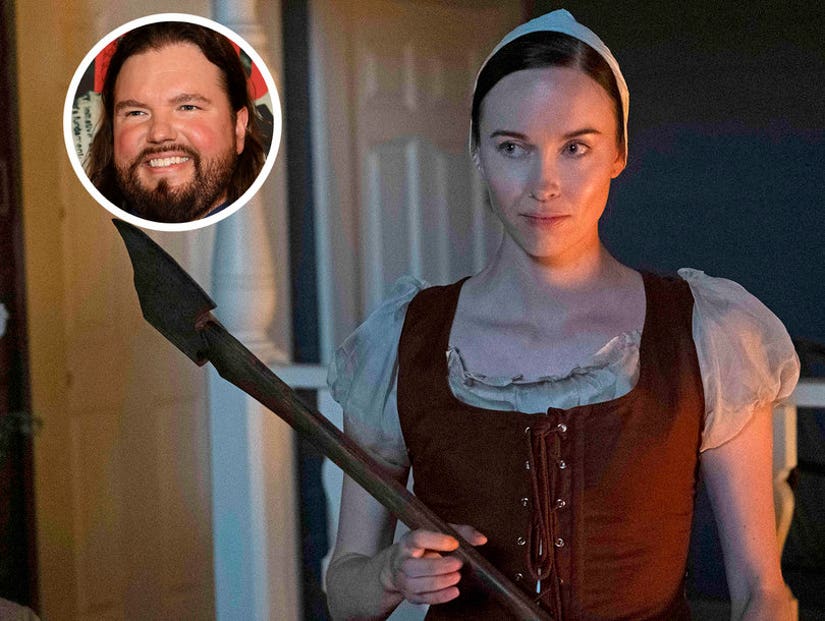 The director of the latest "Into the Dark" installment talks making pilgrims scary and teases his work on the next Final Destination film.

Halloween may be over, but that doesn't mean horror is going back in hibernation.

Launching today, Hulu's anthology series "Into the Dark" dropped its latest film, "Pilgrim." Allegedly inspired by actual events, the new movie follows a family who hires Pilgrim reenactment actors to teach them the meaning of Thanksgiving, only to eventually learn something far more sinister is afoot.

Directing this installment is Marcus Dunstan, who wrote the script with his frequent co-writer Patrick Melton and Noah Feinberg. Dunstan and Melton have also been tapped to write the next "Final Destination" film for New Line, coming nearly 20 years after the original movie.

TooFab caught up with Dunstan before his Hulu movie dropped, where he talked about finding the horror in Thanksgiving, creating one of the project's most disturbing set pieces and teased what fans can expect from his "Final Destination" film.

Why do you think we don't get enough Thanksgiving themed horror?

You know what? I don't know. This is probably the better answer: Creating a movie, especially a horror movie centered around the holidays, relies on opportunity and the means to distribute that opportunity. And so with Blumhouse and 'Into the Dark,' you have a wonderful structure to give storytellers and filmmakers an outlet to specifically target holidays and specifically bring a terrifying take or a twisted fable take on a holiday. So it skips so many hurdles that any other process would throw up before you even got to the opportunity. That I think is marvelous. And Thanksgiving has long been a nice, shiny target. It was a wonderful experience to join on the fun of crafting something that might follow people home far after they've digested their meal.

How much fun was it just coming up with some of the ways the pilgrims torture these people?

That was just sheer delight. It was delight based in, this all stems from a true story, an absolutely a true story written by Noah Feinberg. Some of the more garish and outlandish things in the opening sections are just absolutely true. And the proof is in the the last image of the end credits, where we slowly zoom in on the actual photo of Noah and the actual photo of the pilgrim that showed up to his house when he was just a little kid and wouldn't break character.

When it came time to do the more macabre things, we just tried to tee it up based on the ingratitude of the character, that would then court the gratitude mechanism of the pilgrim. So the more someone was 'asking for it,' that then directly correlated with how they got it.

There is a gross-out feast in this that is not to be missed. Can you talk about putting that together, while avoiding spoilers?

What was marvelous is we have a tremendous team in the 'Into the Dark' production. I really was the only stranger in this party. And I was instantly educated by marvelous folks who had done four, five, six, seven episodes of the show. So I could learn where to push, where to pull back, and where to completely take advantage of the marvelous resources at our disposal. That all then reflected in the structure of how we doled out the events. So everything was practical, everything was built, everything was executed -- to use every meaning of that word -- to a tee because we just had these amazing folks that could show up and deliver your wildest thoughts.

And so we went for it. We live in a world where we've seen some pretty extreme moments in other cinema, how do we compete, complement and achieve our goals so we still stand out amongst them? That was a joy to come back when we had this amazing cast with Peter Giles and Reign Edwards, they were just beautifully crafted opponents throughout. We could turn the volume off and you still see that even how they're regarding each other with body language is a constant territorial war. And then in the end, it's straight up brutal cunning. And when that's backed by a track featuring Peaches ... I've been wanting to have a song featuring Peaches or by Peaches and Planningtorock for over, I think nine years now, and that those desires were able to helix on 'Pilgrim 'is a wild upon wild dream come true.

We have to ask about 'Final Destination.' Has it been fun to come up with the kills?

Oh gosh yeah. I will say this: it has been a marvelous process, from the word go, and that's entirely based on an extremely supportive studio in New line. You've got this producer, Craig Perry and his partner of many years, Sheila Taylor, who I think are just so doggone adroit and they love this material and will not let a single moment go by without vetting it through the aquifer of all their other accomplishments with that series, because they just purely want to aim for the home run. And I love being a part of that. I am so grateful to be a part of something that I really think is going to come out and shock, surprise and grab people by not only the throat, but a little bit of the heart as well.

Part five brought everything full circle. Are you able to say if this new one will be independent of the other films?

This is one of those things where they'd have every right to make a feast of me if I said anything. These experiences depend on their surprise and their how. I am very, very eager for it all to be revealed.

"Into the Dark: Pilgrim" is streaming on Hulu now.