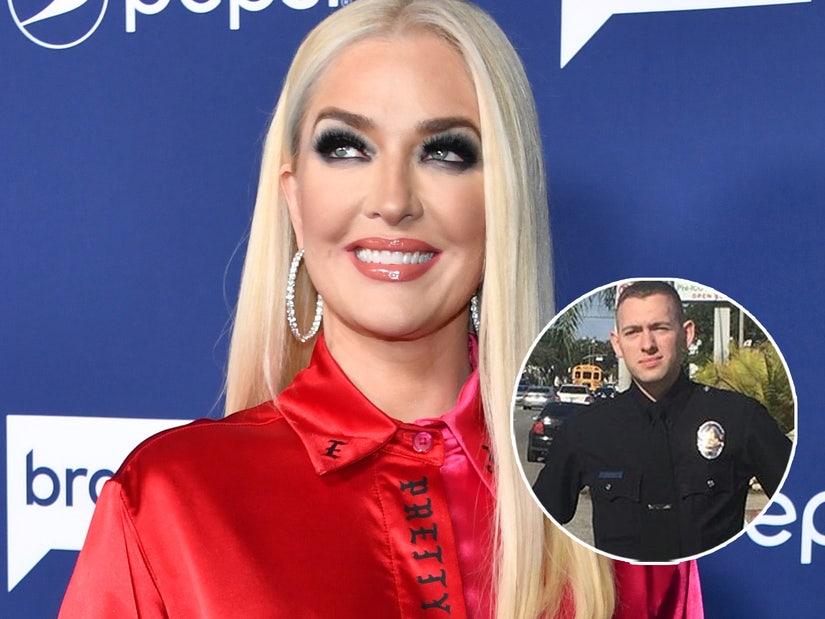 "I don't care if he's an adult and he carries a gun and a badge. At the end of the day. He's still my boy."

Speaking on Andy Cohen's Sirius XM show, "Radio Andy" Wednesday, the "Real Housewives of Beverly Hills" star, 48, opened up about her decision to share a rare photo of her 28-year-old son on Instagram, revealing that his pic is her "best performing post."

"I don't know. Maybe [I'm] quarantine crazy," Erika said as to why she posted the pic of Tommy in his police officer uniform. "But I am a proud mom, you know, of my essential worker son. He's out there working like every other man and woman."

When asked by Andy if she feels "extra protective" of her son during the coronavirus pandemic, Erika replied, "I think we all are. Listen, this is a crazy time. We're all concerned for all of our families."

The reality star, who has two million Instagram followers, said the photo of her son received more likes than any of her other posts.

Andy then brought up how he had stopped sharing photos of his 14-month-old son, Benjamin, at the request of his family, who said his son didn't "choose" to be in the spotlight. However, the "WWHL" said he changed his mind after reuniting with his son following his stint with the coronavirus.

"I was like, 'I'm here. I'm, this is the reality of my life. It's just he and I," Andy told Erika. "And so I guess, you say maybe it's the quarantine, but I think all of us are a little...I think we're just chipping away at what our real life is and who we really are. And you know, this person is such a huge part of your life that it also makes sense why you would now be saying, look here. Here he is."

"I appreciate you saying this before, you know, he didn't choose this life. I chose this life and we try to protect them," Erika replied in agreement. "I don't care if he's an adult and he carries a gun and a badge. At the end of the day. He's still my boy."

"The Pretty Mess" author said she doesn't regret sharing the photo of Tommy, but admitted she didn't give him a heads up before posting it.

"I posted it and I'm glad I did," Erika explained. "He's a very fine young man and I'm super proud."

"Hopefully, it doesn't even come across his whole situation," she quipped. "Who knows!"

On Tuesday, Erika shared the rare photo of Tommy on her Instagram, however, she had the comments section deactivated.

"People say we look alike," she wrote in the caption. "No, you can't comment. 😂

Though Erika has often spoken about her son from her first marriage on "RHOBH," he's never made an appearance on the show.