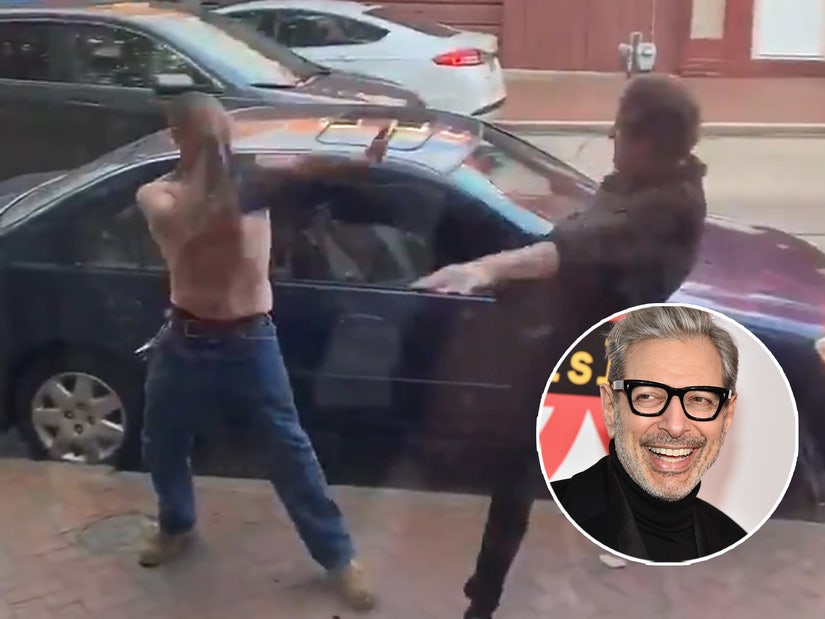 "Is there anyone or anything Jeff Goldblum can't defeat? Dinosaurs, Aliens, the hassle of finding a new apartment and now shirtless street creepers!"

The Jeff Goldblum look-a-like is getting a little help from online fans to pay for the reported broken arm he suffered during Round 2 of his melee with the shirtless man.

A day after the battle royale, the neighbor who recorded the fracas, Leo Sanpai, tweeted, "Alright everyone I made a gofundme to help pay for medical bills/get him a deserved beer so please if you would like to help any and all proceeds will go to my neighbor."

According to the GoFundMe page, the Goldblum clone "also suffers from a medical disorder that's very painful."

"It is impossible to get coverage for because it happened during his service with the marines," the statement read. "The military has refused to cover the medical bills that requires prosthetic dentistry even with his honorable discharge!"

Check out the video of Round 2 below!

Jeff Goldbum began trending on Tuesday for showcasing some choice Street Fighter moves in an altercation with a shirtless man on a sidewalk -- except it wasn't the "Jurassic Park" actor.

In the viral video, a tall, thin man wearing glasses and resembling Goldblum threw down with a shirtless man, who "deserved it," according to the person who posted it.

"He started it," wrote Leo Sanpai. "Before this he was yelling at glasses guy calling him every racial slur too, shirtless man threw the first swing as well. And literally anytime I've ever talked to him he always says disgusting things towards women."

Sanpai went on to post that the shirtless man said "some rapey s--t" about a woman walking down the street, which upset the "skinny dude."

"The reason this ass whooping was dished was because he joked about 'oh I could just hog tie her up,'" he added.

The 40-second clip shows the two gentlemen sizing each other up, with shirtless man holding his fists way above his head, while Fake Jeff Goldblum looks like a poised, trained professional ready to strike.

Blows are exchanged and Fake Jeff Goldblum spins around for a gnarly kick that lands on square on the shirtless dude.

We got angles too 😂😂 pic.twitter.com/vZQx7wfjKL

Another swift kick to the liver by Fake Jeff Goldblum appears to end the brawl, but, according to Sanpai, there was an encore battle, which ended in several injuries.

"After all this shirtless dude had a round 2 but with a 2x4 then cops were called BUT shirtless got broken ribs and nose, and roundhouse kick man got a broke arm," he posted.

Followers were quick to point out the similarities with the "skinny dude" and the real Goldblum as one wrote, "Jeff Goldblum just beat the piss outta Tiger Kong’s first husband," and another posted, "Is there anyone or anything Jeff Goldblum can't defeat? Dinosaurs, Aliens, the hassle of finding a new apartment and now shirtless street creepers!"

Watching Jeff Goldblum’s look alike line up a round house kick to this guys kidney pic.twitter.com/8uyk0X1SFp

For those wondering Jeff Goldblum was utilizing Taekwondo the kick is known as the Dollyo Chagi. pic.twitter.com/qaK22kbU5u

Shouldn't try to size up on jeff goldblum.