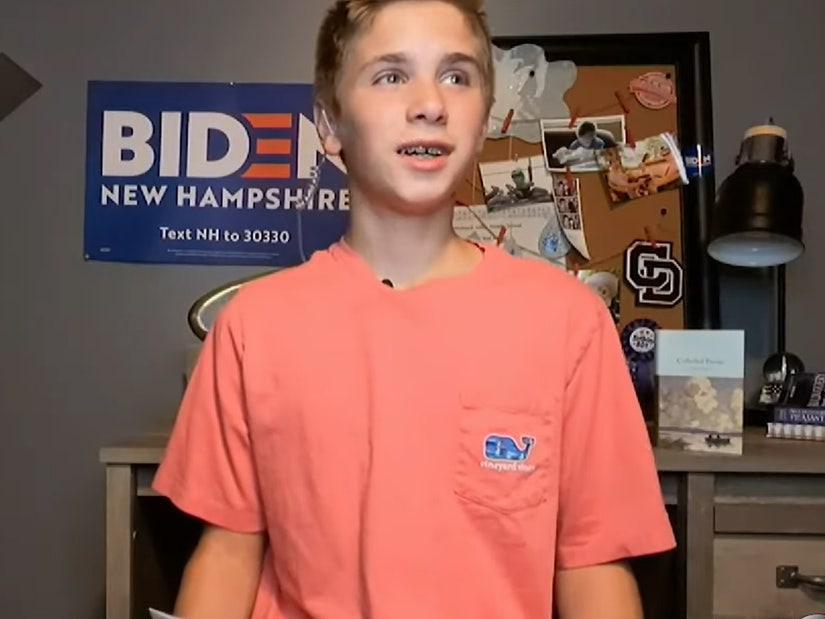 Kelly Clarkson posted, "I LOVE THIS KID!! So brave!! Such a cool kid!!"

The 13-year-old boy who eloquently spoke about his stutter at the Democratic National Convention won the hearts of the American people, including celebrities and politicians.

In one of the most emotional moments during Thursday night's broadcast, Brayden Harrington bravely gave a powerful speech thanking presidential nominee Joe Biden for helping him to work on overcoming the obstacle.

"Without Joe Biden, I wouldn't be talking to you today," Brayden said in a video. "A few months ago, I met him in New Hampshire. He told me we were members of the same club."

At that point, the courageous young man paused to finish his sentence. "We stutter," he triumphantly revealed.

"It was really amazing to hear that someone like me became vice president."

Biden has been open about his own struggle with stuttering, telling The Atlantic earlier this year he was often bullied about it in childhood.

Brayden then went on to explain how Biden said he made marks on his speeches to "make them easier to say out loud" and Brayden followed suit with his own prepared message.

"I'm just a regular kid, and in a short amount of time, Joe Biden made me feel more confident about something that's bothered me my whole life," the poised teen continued. "Joe Biden cared. Imagine what he could do for all of us."

I’M NOT CRYING YOU’RE CRYING!!!! Brayden, you are amazing. You are inspiring. Xo https://t.co/pnL0VWXvra

"Kids like me are counting on you to elect someone we can all look up to. Someone who cares. Someone who will make our country and the world feel better."

And with that, social media said pass the tissues as Brayden began receiving heartfelt praise from the likes of Hollywood and Capital Hill.

Speaking is hard for me too, Brayden. But as you know, practice and purpose help. Thank you for your courage and for the great speech! https://t.co/lAkk8tPRXw

"I'M NOT CRYING YOU'RE CRYING!!!!" tweeted Kerry Washington. "Brayden, you are amazing. You are inspiring. Xo."

Kelly Clarkson posted, "I LOVE THIS KID!! So brave!! Such a cool kid!!" as Yvette Nicole Brown wrote, "This sweet baby speaking about how @joebiden helped him with his stutter at the #DNC2020 is just  😭😭😭😭😭 The good Unc is such a good guy! ❤️"

The good Unc is such a good guy! ❤️

Democratic vice presidential candidate Kamala Harris shared, "Brayden, we're all so proud of you. Your courage and strength is unmatched."

Even Kellyanne Conway showed her support by tweeting, "Way to go, Braydon!"

But one of the most moving tributes came from Gabby Giffords, the former Arizona congresswoman who struggles with her own speech after being almost killed in 2011 during a mass shooting.

"Speaking is hard for me too, Brayden. But as you know, practice and purpose help. Thank you for your courage and for the great speech!" she wrote.

Wow! What a story! #BraydenHarrington! BRAVO!

Watch this, then remember that our current president makes fun of people like Brayden. https://t.co/IFtTOyJw1U

Brayden Harrington’s speech was so beautiful and courageous. Really Strong and Such a moving lead up to @JoeBiden Bravo!

The courage of this kid — https://t.co/fJrO8ksgTn

This kid deserves an encore! One of the bravest and most moving moments I’ve seen in a very long time.https://t.co/kdK8NTsaa7

This was magnificent. Brave beautiful boy! I love him. I love @JoeBiden - what a warm caring man. What a wonderful President he will be. 💙🇺🇸💙 #BidenHarris2020 https://t.co/OVo4TXHRlg