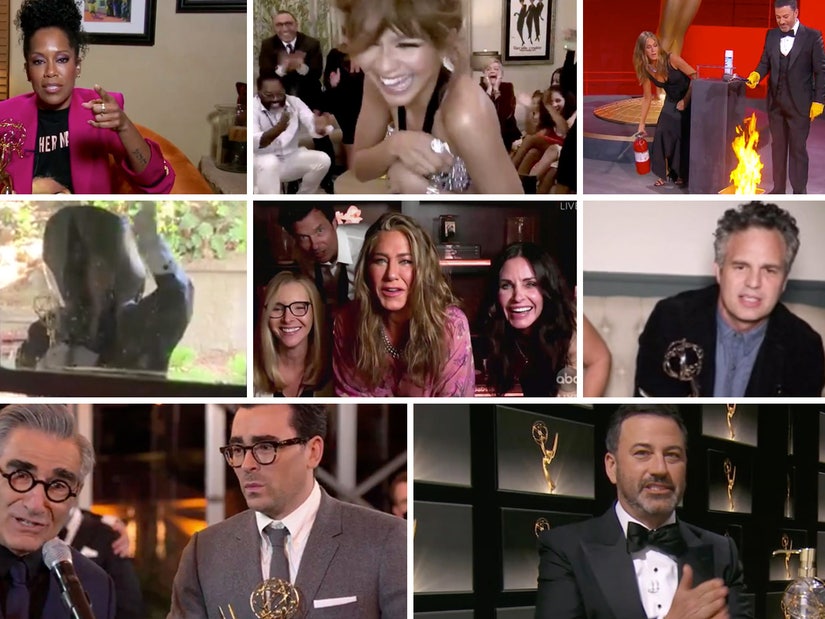 The virtual event was certainly unlike any Emmys we've ever seen before.

While the 2020 Emmy Awards aren't the first award show to go down during the pandemic, they're certainly the biggest so far.

This year's event was hosted by Jimmy Kimmel, who was basically alone at the Staples Center for most of the evening. As for the celebrity presenters, nominees and winners, they almost all appeared from the comfort of their own homes. The Television Academy hooked all the nominees up with camera kits, sending out 130 cameras to 10 different countries and 120 different cities around the world.

And while we're used to seeing celebrities dressed to the nines on the red carpet, there wasn't one this year -- and the stars involved weren't given any sort of dress code for the event. That meant there was the possibility of a good mix of traditional glam mixed with loungewear and pajamas throughout the evening. The Academy even sent people in hazmat suits around Los Angeles to hand out trophies to some of the winners ... more on those in a minute.

Going into the event, HBO's "Watchmen" picked up the most nominations of any project -- with 26 total. Close behind was "Marvelous Mrs. Maisel" with 20, "Succession" and "Ozark" with 18 apiece and "The Mandalorian" with 15. "Schitt's Creek" also did really for its final season, picking up 15 nominations as well.

Click below for all the winners. And below that are the night's most viral moments. 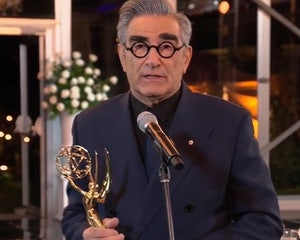 "Television is there for you. The world may be terrible but TV has never been better." - @jimmykimmel opens up the 2020 #Emmys. https://t.co/pntfV2hzyR pic.twitter.com/tzNftnoINS

Jimmy Kimmel hit the stage as host, welcomed by a totally packed and uproarious audience, filled with stars. That, of course, was all a lie. The audience reactions were all made up of file footage from previous ceremonies. It waited until the very end of his monologue for that big reveal.

"Why are we having an award show in the middle of a pandemic? And what the hell am I doing here?" he then asked. "This is the year they decide they have to have a host?"

After saying it's been a year of "division, injustice, disease, Zoom school, disaster and death," Kimmel brought up how television was the friend we all needed in quarantine.  The world may be terrible, but TV has never been better."

"Watchmen is a superhero show, but it also feels very real. It's a very realistic show, except for the part where anyone in Oklahoma is wearing a mask," he then cracked. "Isn't Watchmen what Jerry Falwell Jr. was into?"

Then, the lights in the Staples Center came up, finally showing the empty stands.

"Of course I'm here all alone, of course we don't have an audience," he said. "This isn't a MAGA rally, it's the Emmys." As he showed some of the seats had cardboard cutouts in them, nominee Jason Bateman proved he was actually in the house. After being told he had to laugh at all of Kimmel's jokes if he stayed, he left the building. Jimmy then orchestrated his own standing ovation from the "crowd."

the audience is ... footage from previous years right?

The Emmys cutting to audience reaction from previous years is kind of creepy for some reason?

The fake audience clips mixed with the mechanical laugh track... this is too haunted, even for Halloween season. #Emmys

Awkward presenter banter with no nervous/embarrassed laughter from the audience is delightfully heinous, I'm obsessed with it.

Catherine O’Hara wins the first Emmy of the night for Lead Actress in a Comedy Series for "Schitt’s Creek"! https://t.co/tH3sYrGN8B #Emmys pic.twitter.com/23iosAydaR

"The Morning Show" star and nominee Jennifer Aniston was the first presenter of the evening, actually appearing in-person at the Staples Center to join Kimmel on stage.

Before naming the nominees, the two decided "burning all the germs" off the envelope was the way to go -- so they covered it in Lysol and lit it on fire, leaving Aniston to put it out with a fire extinguisher. People were impressed.

Jennifer Aniston continuing to rescue me in a pandemic 🔥 #Emmys pic.twitter.com/cP4XeLw8fh

Jennifer Aniston is all of us trying to stop 2020 from being worse. #Emmys pic.twitter.com/VtZuhxqsYr

Jennifer Aniston putting out a fire that won’t knock down on live TV is the best thing I’ve seen this year. #Emmys pic.twitter.com/JhuYZ9dFMj

The first SEVEN #Emmys of the night have gone to "Schitt's Creek"!

The stars of "Schitt's Creek" have won all four major acting categories.

All the awards handed out during the first half of the show, celebrating Comedy, went to "Schitt's Creek."

Sorry to everyone else this year -- the first tweet was the official show handle's reaction when it took home Series.

Every nominee not on Schitt’s Creek #Emmys pic.twitter.com/VYcIDZ3IaH

Get you a friend that looks at you like Dan Levy looks at Annie Murphy giving an Emmy acceptance speech pic.twitter.com/JHiJGCupjW

Regina King and Mark Ruffalo Call for Change and Voting

.@ReginaKing wins the #Emmy for lead actress in a limited series or movie for her role in @Watchmen. https://t.co/Lvq117xzZ6 #Emmys pic.twitter.com/GpdLQImEPt

Sporting a "Say Her Name" shirt with Breonna Taylor's name on it, Regina King picked up the trophy for Outstanding Lead Actress in a Limited Series or Movie for her work in "Watchmen."

After thanking everyone involved in the show, she told everyone watching, "Gotta vote. I would be remiss not to mention that being part of a show as prescient as Watchmen. Have a voting plan, Vote up the ballot. It is very important. Be a good human. Rest in power RBG."

Mark Ruffalo accepts the #Emmy for lead actor in limited series or movie for his role in "I Know This Much Is True." https://t.co/Lvq117xzZ6 #Emmys pic.twitter.com/geTjM8V6IV

When Mark Ruffalo picked up Outstanding Lead Actress in a Limited Series or Movie for "I Know This Much Is True," he told everyone we need to take care of "our most vulnerable people."

"We are stronger together when we love each other and we respect each other's diversity," he continued. "We have a big important moment ahead of us, are we going to be a country of division, hatred and only for a certain type of people, or are we going to be one of love and strength? Get out and vote, make a plan and vote for love and compassion and kindness."

Uzo Aduba also wore a Breonna Taylor shirt when she won Outstanding Supporting Actress in a Limited Series or Movie for her work on "Mrs. America."

Breonna Taylor represented tonight on 2 newly-crowned Emmy winners — Regina King, Uzo Aduba — on tonight's telecast more than six months after she was murdered by police who have still not been charged. #Emmys pic.twitter.com/RHyQU1YW7h

Let it soak in that @ReginaKing has won 4 Emmys in the past 6 years — all been for playing different roles. We are not worthy of this 👑. #Emmys pic.twitter.com/Q9wEtqZkCE

Regina King is wearing a Breonna Taylor shirt at the Emmys. pic.twitter.com/KrLKYUSfQ1

they asked cate blanchett to zoom in for an award she was always going to lose to regina king and cate said "no ♥️" pic.twitter.com/VWVPDrEJED

me watching mark ruffalo do literally anything pic.twitter.com/BZ6gloGrMK

I haven't gotten to this one yet, but this is how I feel about Mark Ruffalo in general!!#Emmys pic.twitter.com/DdvBNSZDXu

After literally putting out a fire and presenting the first award of the night, Jennifer Aniston high-tailed it home to watch the rest of the show with a couple of her closest "Friends."

As Kimmel checked in to see if she was ready for her category, Courteney Cox popped up to say hello. "Of course I'm here, we live together," she deadpanned.

"Yeah, we've been roommates since 1994, Jimmy," added Aniston -- before Lisa Kudrow also jumped into the frame. "Where else would I live?" said Kudrow.

Sadly, none of the guys made it, but Jason Bateman made a cameo. "[He's living here] until he goes off to college," said Jen.

Is this the closest we're going to get to the #HBOMax #Friends reunion? #Emmys pic.twitter.com/fW7ucY1Asg

that friends reunion made me happy

I am but a simple woman, I see a #Friends reunion and I get excited #Emmys pic.twitter.com/1ZrLu5eAde

.@Zendaya wins lead actress in a drama series for her role in "Euphoria," becoming the youngest-ever winner of the category at age 24. https://t.co/MBKs1IK0Ff pic.twitter.com/Pk5P75HbOI

In one of the most pleasant surprises of the night, Zendaya picked up the Emmy for Outstanding Lead Actress in a Drama Series for her work in HBO's "Euphoria." At 24, she's the youngest winner ever for this category.

"This is pretty crazy, I don't really cry," she said, excited, holding on her trophy. After thanking her family for their support and the cast and crew, she added, "I know this feels like a really weird time to be celebrating, but I just want to say there is hope in the young people out there."

"Our TV show might not always feel like a good example of that, but there is hope in the young people. I just want to say to all my peers out there doing the work in the streets, I see you, I admire you, I thank you."

So happy for you @Zendaya!! Your performance in #Euphoria is outstanding 🌟💯🙌🏼 https://t.co/gJkJokTRt5

What Happens When You Don't Win

If Emmys were being hand-delivered to all the winners in brand new Kias (That's KIAS, in case you missed the umpteen mentions) ... did that mean that delivery drivers were stationed outside every loser's house with trophies at the ready, too?

Yes, it turns out. Or there was outside Ramy Yousseff's house anyway. The "Ramy" creator and star, who was nominated for Outstanding Actor in a Comedy Series, tweeted a video of a person in a hazmat suit standing in his yard, waving and walking away with the gong he didn't win." When you lose the emmy," he lamented.

when you lose the emmy pic.twitter.com/ECkbGcoHBA