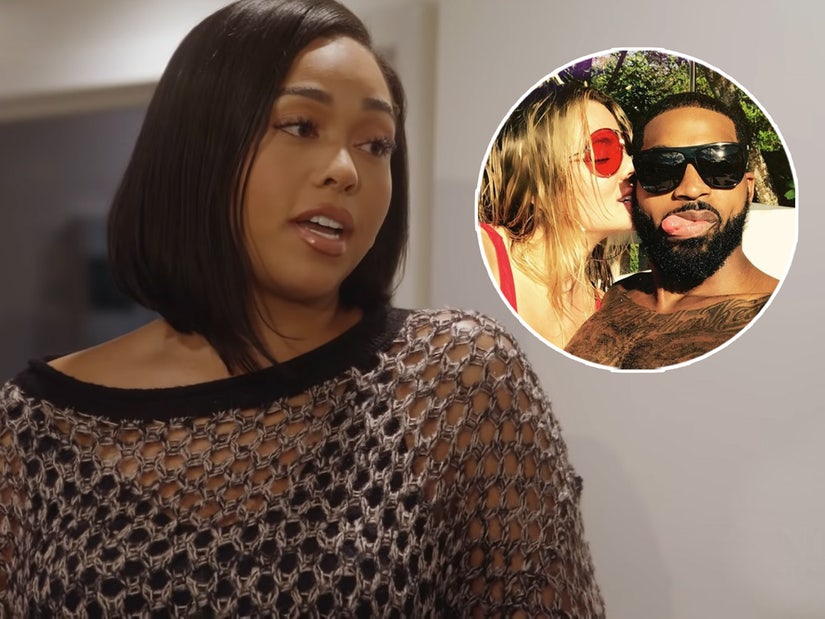 "Everything in my life changed," Woods says now.

It may seem like a lifetime ago, but it's only been a year and a half since Jordyn Woods found herself in the middle of a cheating scandal with Tristan Thompson and Khloe Kardashian.

In a new interview with friend Natalie Manuel Lee, Woods opened up about what it was like to be the focus of public shaming in the wake of the scandal, what she learned about herself from the experience and was asked if she was "happy" it all happened because of the person it made her.

In case you forgot, Woods and Thompson attended a party together shortly after Valentine's Day -- on February 17, 2020 -- where it was alleged they hooked up. Jordyn later denied flirting with Khloe's man, proclaiming on Red Table Talk, "I'm no home wrecker." She claimed he only kissed her on the way out of the party and apologized for putting herself in a situation where that would happen. Though Khloe initially slammed Woods on Twitter, she later issued a statement saying Tristan, and not Jordyn, was at fault.

But as the allegations came out, Woods said everyone turned on her.

Woods said it was easy for her to not engage with a lot of the backlash at the time because she "deleted everything off of my phone." She added, "I wouldn't respond to anyone. I responded to about two people. I pushed people away that probably shouldn't have been pushed away but I just couldn't trust anyone. Everything in my life changed." 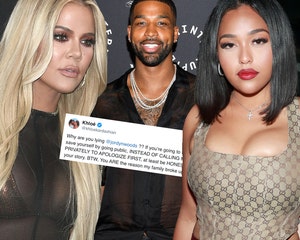 How Jordyn Woods, Khloe Kardashian and Tristan Thompson Moved On From 2019 Scandal

"It's easy to make it seem like the world is against you and in that case in that moment, I did feel like everything was against me," she continued. "The only thing I really had to lean on was my faith and my family. At some point in time, you're going to go through something that feels like your world is falling apart."

Jordyn said the scandal, in addition to the death of her father in 2017, were both "some of the most traumatic experiences a person can go through."

That prompted Lee to ask whether she was happy everything that went down happened, because of who it made her in the process.

"I'm not happy that people were hurt and people had to go through what they went through," Woods answered. "It was a lot for everyone, my family, other families, friends and not in a million years have I had a negative intention to do anything bad to anyone that I love. I wouldn't say that I'm happy something like that happened, but I'm happy that I was able to become who I am today." 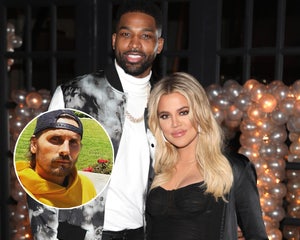 Did Scott Disick Just Confirm Khloe Kardashian and Tristan Thompson Are Back Together?

Part of moving on from the situation meant owning up to her part in what happened. Woods said she asked herself what she should take accountability for, which helped her heal without shame.

"Looking at the situation, 'Okay what did I do, what role did I play in this, how was I responsible, how can I be held accountable, how can I take responsibility for what happened?'" she said she asked herself at the time. "Things happen and that's what makes us human. But just acceptance and accountability and responsibility. I feel like people in this generation lack accountability and when you can't accept what you've done or you can't accept that, then you can't heal from it."

Woods said she also found herself asking, "God, why me?" when everything went down, wondering, "What happened that led me here?"

"When I stood still, I had a second and it was almost like this voice popped into my head and said, 'Not why you, yes you,'" she explained. "This is your path. Life doesn't happen to you, it happens for you."

While she's no longer close with any of the Kardashians, Woods has moved on past the scandal -- and recently went public with her new boyfriend, Karl-Anthony Towns.