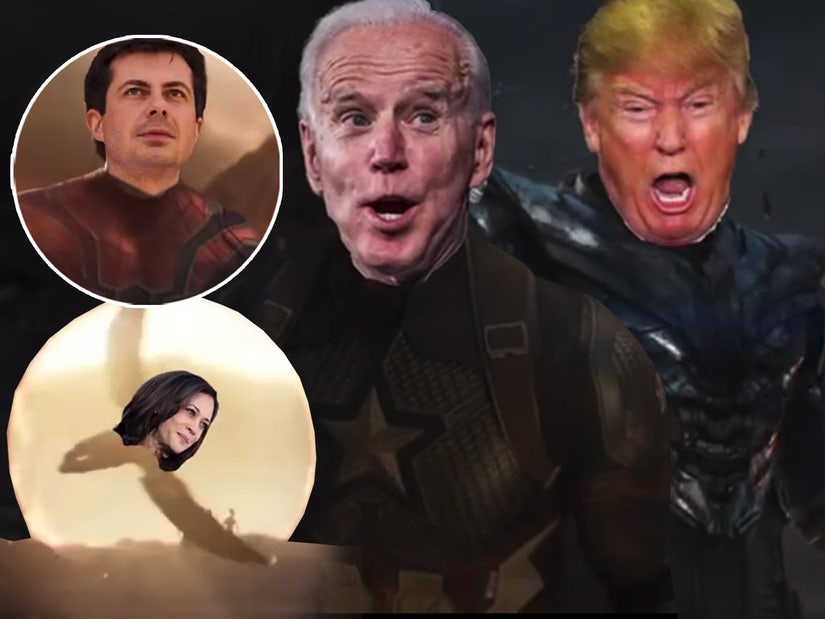 Some have found the clip utterly ridiculous, as others have reacted in earnest.

That's the rallying cry in a truly wild new fan edit of the climax of "Avengers: Endgame," one which dropped online today with an Election twist.

The footage shows a final showdown between Joe Biden's Captain America and Donald Trump's Thanos, with Cap getting much-needed backup from every Avenger imaginable at the last second.

Stepping in for Anthony Mackie as Falcon is Kamala Harris, whose "Excuse me, Mr. Vice President, I'm speaking" is heard over Biden's ear-piece before Doctor Strange's portals start to open around him.

A few politicians who are no longer with us -- including John Lewis, Ruth Bader Ginsburg and John McCain -- lend a hand, as do mail-in ballots and, most random, Sean Connery.

Like we said, absurd, but that didn't stop it from being shared like crazy on Twitter -- where some stars have shared it with earnest emotion while others got in on the fun. It even got love from Hulk himself, Mark Ruffalo.

Would watch the heck out of this movie. May have gotten a tad emotional at the end there... https://t.co/WyZUNnkaqF

I don’t know who did this, but take a bow

God help me Rex, I actually cried. Like, got emotional.
What’s happening to me???? https://t.co/5R0ddY4NJi

I thought this might be cute but in fact it was INCREDIBLE. https://t.co/POAddRoJIy

Omg this is beautiful! Tweets watch this but get the tissues I’m so emotional! @JoeBiden @KamalaHarris our heroes! https://t.co/kb2qdfY79Y

Ok. I enjoyed this way too much. https://t.co/p5FH8RwrtB

This is silly and wonderful. I love it. https://t.co/Sjsb7pezpI