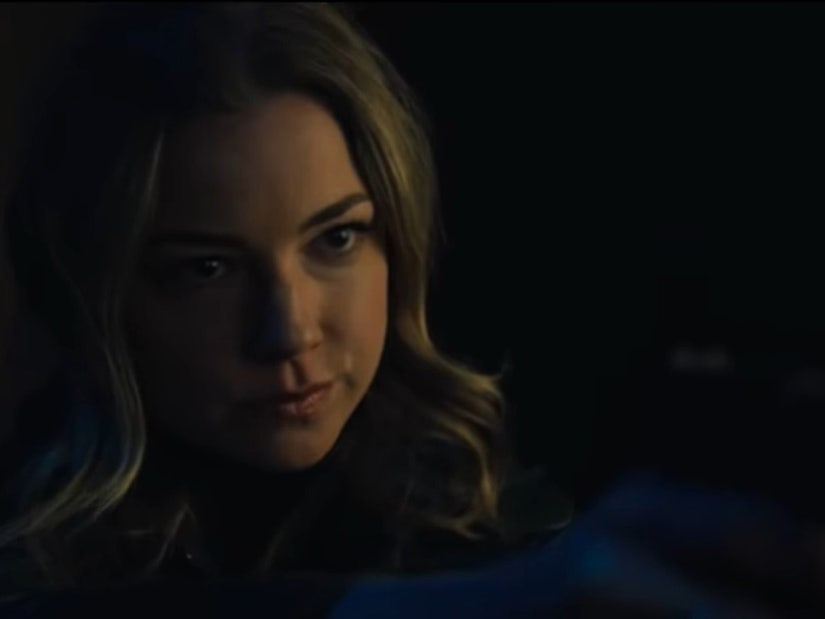 Unlikely allies lead to surprise encounters with old friends in a lawless land -- or are they friends anymore?

All the disparate plot elements of "The Falcon and the Winter Soldier" came together by the end of this hour as Sam and Bucky found themselves facing down an old enemy, an old ally and even a surprise guest star from the larger MCU.

Once again, the latest installment of Marvel's action-packed Disney+ series lit up social media, with fans clearly more excited about the return of Daniel Bruhl as the deliciously villainous Baron Helmut Zemo than anything else that happened. 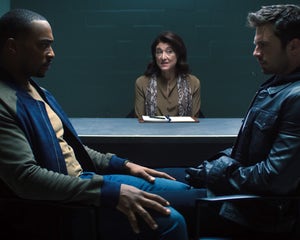 The Falcon and The Winter Soldier Therapist 'Sure Hopes' Show Explores Dr. Raynor's Past (Exclusive)

Zemo was trending number one on Twitter as the episode was airing, above even the show itself. Also trending were fellow guest star Emily VanCamp's Sharon Carter. The last time she helped Sam and Bucky (along with Steve Rogers), she wound up on the run from the very government she'd sworn to serve, so things were maybe a little tense there.

Also hitting the trending topics was Madripoor, a lawless pirate city-state turned first-world oasis for the darkest denizens of society to live out all their most twisted fantasies. A popular and well-known place in the Marvel Comics Universe, it made for a dazzling first appearance in the MCU.

Madripoor was also where Sam and Bucky were able to finally get some answers about where these new super-soldiers came from, why they don't look the way Steve turned out, and how big of a threat this is for the future of mankind.

Coming as no surprise to anyone, after last week's reveal that Sam and Bucky were going to go see Zemo in the state-of-the-art German prison where he was being held, Bucky actually facilitated a prison escape for their former enemy. Well, he's hardly their friend now, but he's at least on board with their mission.

Actually, Bucky exploited Zemo's HYDRA passions that no one ever recreate the super soldier serum that created Captain America as it stands as a huge threat to mankind in general should that kind of power be mass produced and weaponized.

As for how it came to be, after tracking down the scientist who'd successfully recreated the formula, tweaking it slightly himself, we learned that he was actually among those who vanished for five years. At the time, he was nearing completion on his work for the CIA -- because of course the US was trying to recreate it and do those very things. 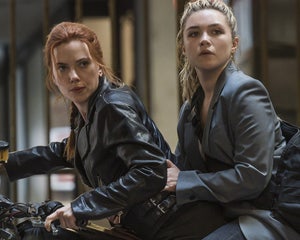 After he returned, the program had been shut down, but he found new funding in Madripoor from the Power Broker -- the "king" of this lawless land we'll probably meet later. It was here that he finished the serum, modifying it so that no one came out jacked.

Oh, as for how he found the traces of the serum to do his work, the military had it from Isaiah, the first Black Captain America we met last week who lamented being experimented on by the military like a lab rat. The U.S. Government is not coming out smelling like roses on this show!

The boys are having a rough time, too, having picked up a bounty on their way to meeting the good doctor, making contact with someone Zemo knew in a club -- that managed to include Zemo dancing.

The good baron was enjoying the high life again out of prison, hitting up his private jet, swanky outfits, cool purple masks and sports cars seemingly everywhere. And did we mention those cool dance moves?

#FalconAndWinterSoldier SPOILERS
-
-
-
-
-
-
-
-
Zemo dancing is just so funny to me idk why pic.twitter.com/MJjwJEVi1h

#FalconAndTheWinterSoldier spoilers
-
-
i honestly forgot that zemo was a dad in the mcu for five years.. and then i saw his dancing and suddenly it all came back to me pic.twitter.com/9vSMhgT9da

Zemo at the club in Madripoor: pic.twitter.com/fwMu6mhib5

#TheFalconAndTheWinterSoldier
spoilers
-
-
-
-
zemo and his criminal friends at the club pic.twitter.com/PQrdlgwSYq 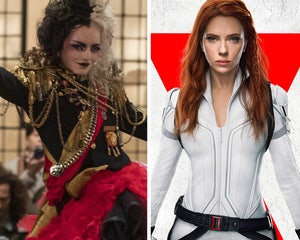 The boys would have never found Dr. Nagel without an assist from the woman formerly known as Agent 13 aka Sharon Carter. It turns out she's been keeping very busy in her life in exile from the United States for crimes far less than what Bucky has already been pardoned for.

She basically built a criminal empire dealing in stolen original art masterpieces. But she also still knows how to kick ass, and is willing to apparently give up everything she's built just on the chance of coming back home and seeing her family again.

Or does she? She rather quickly agreed to work with Sam and Bucky to help them find the good doctor and learn how he came to create the serum and what happened to it. It turns out, as we could have surmised, that Karli stole it.

The apparent leader of the Flag Smashers has already proven herself a super-soldier, along with seven other of her friends. If Nagel was being truthful in saying she'd stolen 20 vials, then there are 12 others unused. 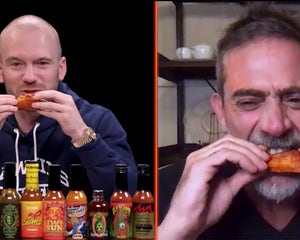 And it may be that those wind up being the only 12 remaining, because in a moment of distraction when Sharon stormed the facility with bounty hunters on her tail, Zemo shot Nagel dead.

Because of course he did. Zemo doesn't think anyone should have a super-soldier serum. Nagel had already admitted he'd had to start over in Madripoor and he perfected the formula. That means he could do it again. And again. And again. So ... now he can't.

But after helping the three musketeers -- or stooges, as the case may be -- make their escape, Sharon met up with a mysterious woman, telling her that they have "two big problems."

So maybe she's not as off the grid and on the run as we thought. Is she still working with the U.S. Government? Perhaps she's in with the Power Broker? It's kind of fun that we really have no idea where her true loyalties lie right now.

sam, bucky, zemo, and sharon is the quartet I never knew I needed#TheFalconAndTheWinterSoldier pic.twitter.com/8MT2whrcrP

can we talk about how sharon carter kicked all their asses ALL ON HER OWN?? pic.twitter.com/XzutelbzyA 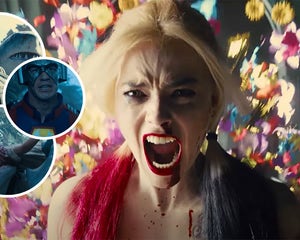 In the beginning of this series, we got a callback to Bucky having spent time on Wakanda as part of his recovery. At the end of this hour, in a stunning and delightfully exciting surprise, Wakanda came for him ... in Latvia, of all places.

Latvia is where we'd seen most of our scenes with Karli and her Flag Smashers, as they take on the GRC, or Global Repatriation Council. The episode opened with a fake commercial for this organization that purports to be about helping those who vanished for five years assimilate back into the world.

It may be that they are a far more sinister organization than that. Their resettlement camps seem to bear a resemblance to border detention facilities, or other camps throughout history that are designed to house those who are other, or even undesirable.

At one point, we see Karli and her operative stealing six months worth of food and supplies from one such facility in Lithuania, with no explanation of why they're hoarding them there. At another point, we see Karli suffering the loss of a friend and mentor in one of their camps, where conditions look rudimentary at best.

So are the GRC a villainous organization pretending to be good? We know the Flag Smashers want to return the world to what it was when half of it was gone and everyone was united -- or so we've been told -- so it would stand to reason they'd oppose the GRC's mission, whether the group is good or bad.

And so, the boys found themselves making their way to Latvia as part of their continuing mission to track down the super soldiers (and their side quest of recovering the shield from John -- who's already ready to go off the books to take them down). And it was there that Bucky saw something familiar on the ground.

He faked needing to take a walk, so he clearly didn't want Sam or Zemo to know what he was doing. And then he followed the trail, only to find his way to Ayo (Florence Kasumba). Second-in-command of the Dora Milaje, Ayo played a key role in the defense of Wakanda against Thanos in "Avengers: Infinity War."

While she proved herself a strong and brave warrior, protecting Shuri's work as she attempted to separate Vision from the Mind stone until she was overcome, as well as fiercely loyal to the royal family, this is the first time we've seen her on her own.

It should be interesting to see whether she comes as a representative of King T'Challa (not sure how the MCU has decided to address the tragic death of Chadwick Boseman yet), or is she "here for Zemo" on her own?

It could be an official mission, or it could be about revenge considering Zemo -- you know -- kind of killed King T'Chaka. We'd imagine Wakandan intelligence knows he broke out of prison, and they probably know pretty much everything else that's going on.

But why did she make contact with Bucky separately first, rather than just try and take out Zemo? Considering Bucky spent time on Wakanda, it's possible they developed a working relationship, or friendship, or even something else during that time. Maybe she's trying to take him alive.

However it plays out, it's an exciting connection to introduces as "The Falcon and the Winter Soldier" reaches its halfway point, and certainly a cool surprise for MCU fans. And if we were Zemo, we'd be sweating already ... even if we didn't know why.

As for fans, her appearance was both thrilling and bittersweet, as she represents one of the most popular films in the entire MCU, but also stands as a living reminder that T'Challa is gone and will not be appearing again.

cw // tfatws spoilers #TFATWS
-
-
-
-
-
when she beats zemo’s ass up next episode 😌🤞
pic.twitter.com/GvuAShlMoE

Seeing Ayo of the Dora Milaje Appear at the end of Episode 3 was so refreshing and exciting but thoughts of never seeing Chadwick Boseman Grace the MCU ever again as T'challa will forever be heartbreaking. So long King. #FalconAndTheWinterSoldier pic.twitter.com/Nsq47uSzpi