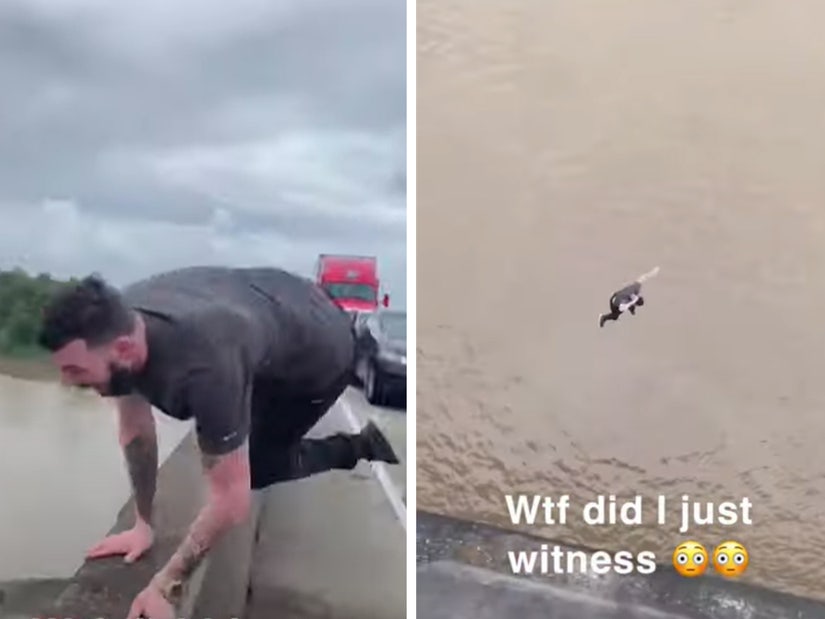 "As soon as my fingertips came off that side, I was like, 'Oh my God, this was the stupidest idea.'"

Ever been so bored in traffic you nearly died? This guy did.

Frustrated with a traffic jam in his native Louisiana, Jimmy Ivan Jennings leapt off a 100ft bridge into alligator-infested water — and it was all captured on video.

The 13-second clip, recorded by a friend (of questionable dependability), shows the 26-year-old running from the gridlock, vaulting over the rail, and free-falling for approximately eternity, before hitting the surface of the water with a sickening smack:

The Lafayette resident told NY Daily News he'd been sitting in his car on Atchafalaya Basin Bridge for two hours after a ten-vehicle collision brought traffic to a standstill. He told his pal Khory Vaughan he was going to jump into the river, swim to shore and get picked up at the next exit. But that's not quite how it went.

"We were bored inside the truck... I looked down (at the water), and it didn't seem too far," he told the site.

"As soon as my fingertips came off that side, I was like, 'Oh my god, this was the stupidest idea.'"

"Once I hit the water, my mouth busted open and I hurt my left arm. I tried to swim to the shore, but the current was too strong."

"An hour and a half in, I was so tired of swimming. My left arm went out," he continued. "I turned onto my back and would push with my right hand and my legs whenever I went under. I was praying the entire time."

"I started going under and almost drowned a few times. I really and truly thought it was the end of my time. I asked God for forgiveness. I forgave everyone in my life. It was hectic."

After struggling to tread water for three hours, the current finally weakened enough for him to make to to shore.

"It was pretty crazy me getting back to shore. I had to walk, where I was at, I couldn't even see the bridge anymore," Jennings told ABC13.

Wandering around barefoot, he stumbled across an ATV; after riding that around lost for an hour, he finally realized he was actually stranded on an island.

So he borrowed a boat he found, and crossed back to the mainland, where he finally ran into the police. But after spending hours looking for him, they were not too happy to see him.

After being treated in hospital, he was cited for criminal mischief and criminal trespassing.

"It was crazy to do what I did," he said. "But after the fact, after realizing it was a bad idea, everything else I did was in pure survival mode."

On the original Facebook video, he wrote: "I was just high on life everything was going my way and I've seen people do it before only I remembered after I jump(ed) that was in movies."