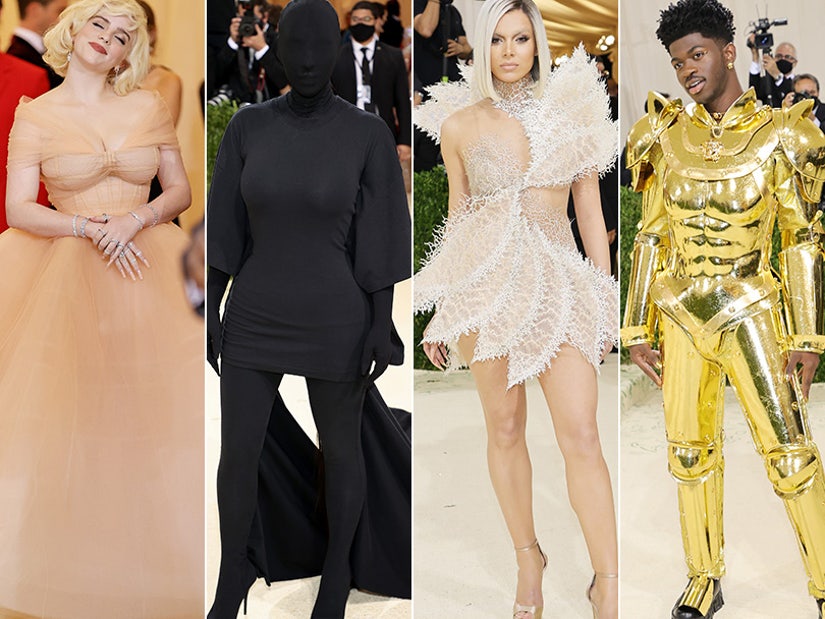 Twitter had a field day with these looks from the red carpet.

After canceling "Fashion's Biggest Night" due to the pandemic, the Met Gala finally returned Monday night -- and Twitter lost its damn mind over all the wild style outside the Metropolitan Museum of Art.

Every year, the most stylish stars in the entertainment industry hit the red carpet for the annual event, which coincides with the opening of the Costume Institute's new exhibit. This year's theme was "In America: A Lexicon of Fashion," with the exhibit celebrating "the creativity and originality of designers working in the United States.⁣⁣⁣⁣"

The Met Gala will return to its regular spot on the first Monday of May in 2022, where Part 2 -- "An Anthology of Fashion" -- will explore "the history of fashion in the context of race, gender, and materiality, while also considering who was able to inhabit the rooms and who was barred from doing so."

Check out all the viral moments from this year's event below.

Serving up Lady Gaga vibes, Lil Nas X took the Met Gala carpet by storm by delivering not one, not two, but three iconic looks and Twitter was here for every. one. of. them. They also praised him for stepping outside of the standard boring men's suit look with all three of his fashion choices.

Lil Nas X said I'm going to serve you not one, not two, but THREE outfit reveals with some cake for dessert #MetGala pic.twitter.com/3Ww3ckbQ0G

Lil Nas X is giving me this. #MetGala pic.twitter.com/9r09YKFcLf

With many saying she looked like she stepped right out of Audrey Hepburn's "My Fair Lady," Kendall Jenner's daring ensemble was certainly drawing all eyes on the Met Gala carpet. And Twitter could not get enough of her sheer look, either, giving her one of the night's biggest breakout looks!

Kendall Jenner in Givenchy for Met Gala 2021, about American Fashion… The embroidery is a similar to Audrey Hepburns dress in My Fair Lady, and the sheer fabric drape on glam embroidery is so Bob Mackie. Gonna be honest about this, Kendall Jenner won the assignment#MetGala2021 pic.twitter.com/wRWJvlxX5v

can we all agree that kendall is really serving this year’s met gala?! ❤️‍🔥#MetGala #MetGala2021 pic.twitter.com/9Ne5AM28TC

As she and Ilana Glazer were Vogue's official livestream cohosts for the night, they were also the first two to arrive at the event -- and did not disappoint. While Glazer looked gorgeous, Keke Palmer stole the show in her glittery, backless Sergio Hudson gown. Paired with her hair, it was just perfection.

Zayday Williams is the killer! 🗣️

She dazzles! @KekePalmer is a vision of gold on the 2021 #MetGala red carpet. ✨ #MetInAmerica pic.twitter.com/gsGNpOWKAd

If Keke Palmer ran me over I’d thank her #MetGala pic.twitter.com/Ed8Je9UoRn

Kim Kardashian Covers Up ... EVERYTHING!

Were it not for her iconic curves, no one would have even known that was Kim Kardashian under a full black ensemble that covered every inch of her body from head to toe, face to fanny.

At the same time that she was doing this, all of the 13 accounts that Kanye West follows changed their profile pictures to solid black. Maybe someone didn't tell Kim that Kanye has actually unfollowed her account, so the solidarity with this look isn't really working.

As expected, Twitter could not get enough of her unexpected style comparing her to everything from Harry Potter dementors to Death from The Sims. It was certainly a different way for a Kardashian to stand out and get attention, with Kim not revealing her face until late in the evening.

is kim k really going to the met gala as a dementor pic.twitter.com/qbiuGXGaWG

for a little over 30 dollars you can be kim k for halloween pic.twitter.com/jrcEk1EF8K

They were late to the Met Gala, so is that why Rihanna and ASAP Rocky just draped their bedding around themselves -- okay, him more than her? Twitter was scratching their heads trying to figure out these looks, with Rocky's in particular leaving them feeling like it was time for breakfast or bed ... or maybe breakfast in bed? You know you're serving a look when you can get Cap'n Crunch trending because of it!

it’s like rihanna and asap rocky planned to go as a bedding set up like he’s the quilt and she’s the comforter and they’re trying to portray how america “sleeps on” black art and artists or maybe im just tired and reading too far into it lol #MetGala pic.twitter.com/l0vmrJ6dHj

Asap Rocky looks like he was dragged out of bed to come to the #MetGala pic.twitter.com/kKCFErq1Eu

Okay but why is ASAP Rocky out here looking like Candy Crush at the #MetGala ?! pic.twitter.com/dwes3BEmaw

In what might just be the most glamorous and voluminous look of the night, Billie Eilish turned heads and left jaws hanging with a stunning Oscar de la Renta gown complete with a train so long it's still probably making its way down the carpet. She agreed to be dressed by the designer in exchange for the brand stopping their use of fur, making this a statement piece in more ways than one.

Already adorned with her new blonde locks, Billie was bringing Marilyn Monroe at her most elegant vibes, sashaying across the carpet, owning her femininity and beauty. There might have been a delayed social media reaction as fans first had to pick their jaws back up off the ground before they could praise everything about this look.

i think we can all agree billie eilish was the best dressed for the met gala right pic.twitter.com/cMaethDmsA

it was so kind of billie to let the met gala come to her event pic.twitter.com/iysKtj0Uxu

not now mommy has to look at billie eilish at the met gala pic.twitter.com/PHaMFG3HFW

It's Just Meh for Addison Rae

It was the first Met Gala for the social media influencer, and her excitement at being there was not remotely matched by the collective "meh" that could be heard flying across the Twittersphere. The overwhelming consensus was that she looked ... fine.

But this is the Met Gala, not a homecoming dance at your local high school. Addison Rae may know how to rack up millions and millions of followers on TikTok with her moves, but that did not translate to impressing in red on this red carpet.

It like her stylist wanted her to get negative attention 😭

This is why ppl have a problem with influencers or TikTok stars attending. They just don't bring it. Like this would be good for the YouTuber of the year award or something but not the met gala

did she forget her outfit at home or??

Hailee Steinfeld had Twitter chattering all night long because they could not believe that was her at the Met Gala. It wasn't the dress as much as it was the absolutely everything about her. She was just about unrecognizable, leaving many to do double- and triple-takes to be sure it was her they were looking at.

Her look was that of a fierce, confident and domineering blonde. And if you looked really, really close, her look was Hailee Steinfeld. No really, it is her.

Hailee Steinfeld legit made me gasp (and had to triple check it was her lol) — a top-tier look #MetGala pic.twitter.com/Nz706BvFVc

If I had no idea that today was the Met Gala, then zero percent of me would think this is Hailee Steinfeld. pic.twitter.com/GTVkbcsa2D

I’m over here comparing photos….does not look like her. Crazy.

Representative Alexandria Ocasio-Cortez took the homework assignment seriously by taking one of her campaign messages straight into the Met Gala with a dress emblazoned with the message, "Tax the Rich."

While there was obviously partisan bickering over her attendance, the cost of said attendance and the message itself, the end result is that AOC wound up with one of the most talked-about looks of the night, and one of the few that spoke directly to issues facing America now.

Alexandria Ocasio-Cortez attending the $35,000-a-ticket #MetGala in a Brother Vellies gown blaring "Tax the Rich" is a complicated proposition. pic.twitter.com/prxOojWxwx

When AOC was a bartender demanding that we tax the rich, people said that she was just jealous of them.

And now that AOC IS amongst the elite and STILL advocating to increase their taxes, those same people are dismissing her as a hypocrite.

Elliot Page Gets One Free Pass

For the most part, armchair fashion critics on Twitter hate a boring black-and-white suit on a man, and especially at an event like the Met Gala. But this year, they allowed for one exception, even as they admitted that transgender actor Elliot Page's suit was pretty boring.

The bottom line, though, is that Elliot looked absolutely euphoric to be able to wear the suit, to be comfortable in who he is for perhaps the first time in his career at one of his first major public events since his transition, and so he gets a free pass -- but just for this year!

Enjoy it, Elliot, because you better bring it in '22.

the only man i’ll allow a basic a suit. elliot page can do whatever the FUCK he wants and i’ll bow. #MetGala pic.twitter.com/Q2FI4gaBxB

ok elliot page is allowed to dress boring because he looks happy doing it and that's literally all that matters, IN THIS ONE SPECIFIC CASE https://t.co/evUGzqQEd6

white men in elliot page in
a b&w suit a b&w suit#MetGala pic.twitter.com/qlza0xaeKf

me seeing the basic black suits men are wearing: 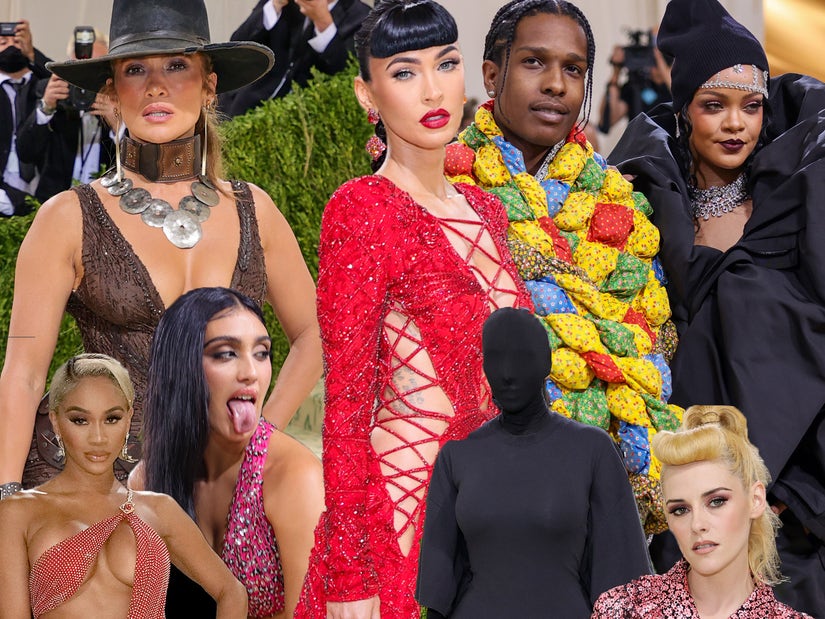