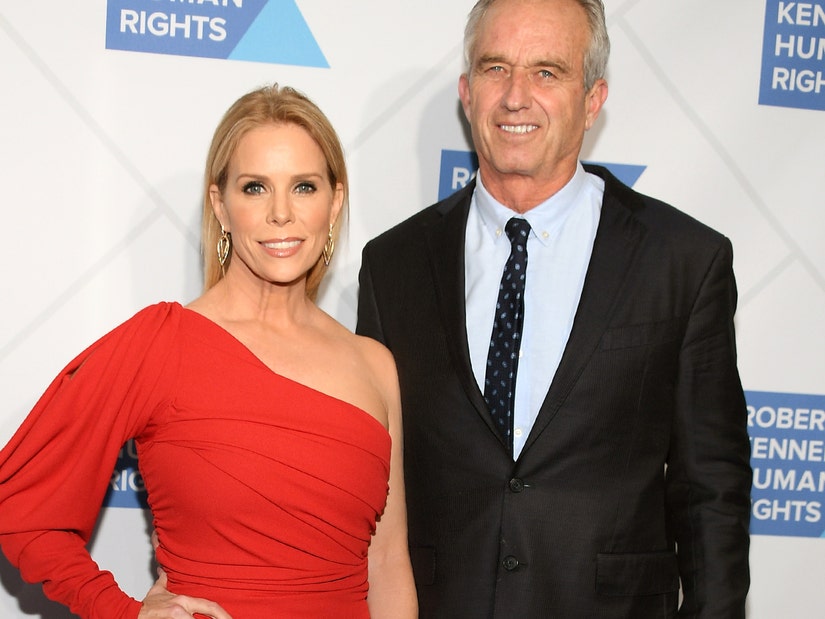 Following his wife's post about his comments, Robert F. Kennedy Jr. issued his own apology for his speech at an anti-vax rally over the weekend in D.C.

"I apologize for my reference to Anne Frank, especially to families that suffered the Holocaust horrors," he wrote on Twitter. "My intention was to use examples of past barbarism to show the perils from new technologies of control. To the extent my remarks caused hurt, I am truly and deeply sorry."

After his apology, many noted he had to offer up a similar mea culpa back in 2015 -- after he called the number of children injured by vaccines in general "a holocaust."

"I want to apologize to all whom I offended by my use of the word holocaust to describe the autism epidemic," Kennedy said at the time. "I employed the term during an impromptu speech as I struggled to find an expression to convey the catastrophic tragedy of autism which has now destroyed the lives of over 20 million children and shattered their families."

Cheryl Hines broke her silence on Monday night, after her husband Robert F. Kennedy Jr. made headlines for a speech he made during an anti-vax rally over the weekend in Washington D.C.

During a rally against vaccine mandates on Sunday, Kennedy likened the policies enacted to fight the pandemic to Nazi Germany -- and even insinuated those facing persecution from the Nazis had better options than anti-vaxxers do now.

"Even in Hitler's Germany, you could cross the Alps into Switzerland, you can hide in the attic like Anne Frank did. I visited in 1962, East Germany with my father and met people who climbed the wall and escaped. Many died doing it, but it was possible," he said during his speech.

"Today the mechanisms are being put in place that will make it so none of us can run and none of us can hide," he added, before talking about satellites, Bill Gates and 5G.

At the antivaxx rally in DC, RFK Jr. says that in the future "none of us can run and none of us can hide" because of Bill Gates' satellites and also 5G, unlike... the Holocaust.

"Even in Hitler's Germany, you could hide in the attic like Anne Frank did." pic.twitter.com/bRtmDBTxZl

On Sunday night, the Auschwitz Memorial responded to a clip from the speech on Twitter, writing, "Exploiting of the tragedy of people who suffered, were humiliated, tortured & murdered by the totalitarian regime of Nazi Germany - including children like Anne Frank - in a debate about vaccines & limitations during global pandemic is a sad symptom of moral & intellectual decay."

Hines was tagged in the replies to the Auschwitz Memorial's tweet -- with with one follower demanding she "make a statement" and asking whether she "stands with your husband."

"My husband's opinions are not a reflection of my own. While we love each other, we differ on many current issues," she responded.

@CherylHines you need to make a statement!
Do you stand with your husband?

My husband’s opinions are not a reflection of my own. While we love each other, we differ on many current issues.

That statement wasn't good enough for at least one follower, who suggested an alternative response to RFK Jr.'s comments in the replies.

"How about this? 'No one should compare anything to the horrors of the Holocaust. My husband was wrong to do so,'" read the comment. Hines' reaction: "Yes, I agree with you."

Hines made things a little more confusing, however, when she responded to reporter Ben Collins, who retweeted her response and wrote, "Here's Cheryl Hines commenting on her husband RFK Jr.'s comparison between antivaxxers and Jews in World War II."

"I assure you that’s not what I was commenting on," she said, before Collins shared a screen grab of the entire thread. She denied responding to anything having to do with World War II and added, "I was responding to, 'Do you stand with your husband.'"

Yes, I agree with you.

I assure you that’s not what I was commenting on.

Yeah, I know. So you can see what I’m replying to, right? Nothing about WW II.

I was responding to, “Do you stand with your husband.”

On Tuesday morning, she clarified her stance with an additional statement.

"My husband's reference to Anne Frank at a mandate rally in D.C. was reprehensible and insensitive," she wrote. "The atrocities that millions endured during the Holocaust should never be compared to anyone or anything. His opinions are not a reflection of my own."