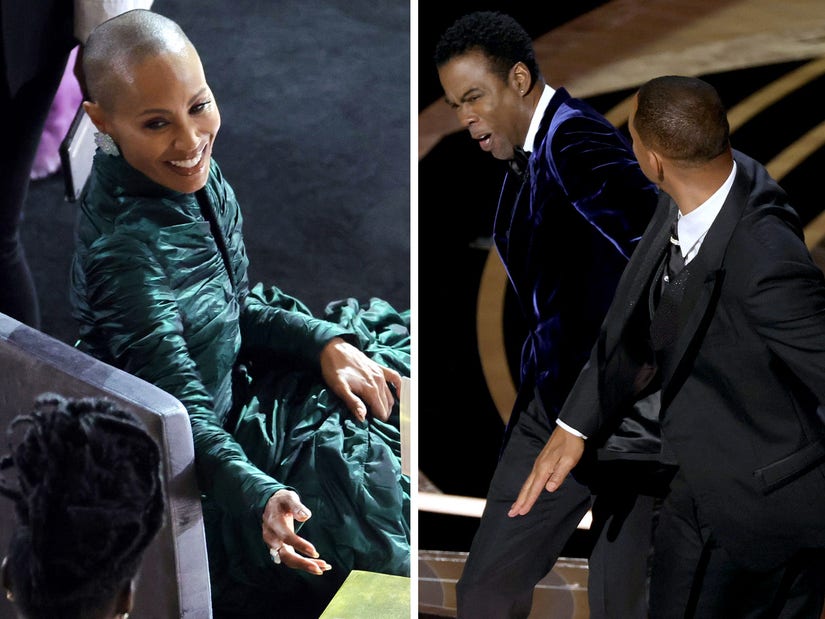 New footage has been revealed that seemingly shows how Jada Pinkett Smith reacted after her husband Will Smith slapped Chris Rock during the 2022 Oscars.

The world watched when Smith stormed the Oscars stage on Sunday night after Rock made a joke about Jada's short hair, comparing her look to the shorn Demi Moore in the 1997 film "G.I. Jane." The Red Table Talk host suffers from alopecia, which TMZ reports Rock was unaware of.

After the joke, which Smith was initially seen laughing over as Jada rolled her eyes, Smith walked up to the stage and smacked Rock hard across the face. "Will Smith just smacked the s--- out of me," Rock reported, to which Smith screamed back at him from his seat, "Keep my wife's name out of your f---ing mouth!"

However, a short clip of Jada's reaction has surfaced on TikTok and has been circulating on social media. The footage appeared to have been shot on a cellphone by someone in the audience who was sitting behind the Smiths.

As shown in the video, after Smith smacked Rock and returned to his seat, and Rock said that the actor "smacked the s--- out of me," Jada seemed to have laughed at the at the scene that just unfolded. Since the footage was shot from behind, her face was hidden. However, the star appeared to have leaned forward in laughter.

She sat still when Smith yelled, "Keep my wife's name out of your f---ing mouth!" at Rock, twice. Jada reacted -- and possibly laughed -- after Rock described the incident as "the greatest night in the history of television." 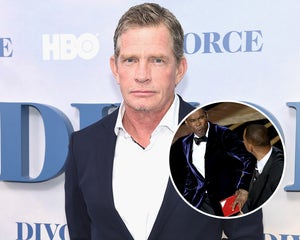 It's unclear who, in fact, filmed the video. Check it out, above.

Meanwhile, a short while after the infamous slap, Smith won the Academy Award for Best Actor for his performance in "King Richard." In his acceptance speech, the actor referenced the altercation and apologized to the Academy and his fellow nominees, but neglected to mention Rock in his mea culpa.

On Monday, Smith took to Instagram to share a lengthy apology to Rock, the Academy and his co-stars.

"Violence in all of its forms is poisonous and destructive. My behavior at last night's Academy Awards was unacceptable and inexcusable. Jokes at my expense are a part of the job, but a joke about Jada's medical condition was too much for me to bear and I reacted emotionally," he began.

"I would like to publicly apologize to you, Chris. I was out of line and I was wrong," Smith said on Monday night. "I am embarrassed and my actions were not indicative of the man I want to be. There is no place for violence in a world of love and kindness."

"I would also like to apologize to the Academy, the producers of the show, all the attendees and everyone watching around the world," he concluded. "I would like to apologize to the Williams Family and my King Richard Family. I deeply regret that my behavior has stained what has been an otherwise gorgeous journey for all of us. I am a work in progress."

Less than 24 hours later, Pinkett Smith shared her first post to social media since the slap seen 'round the world. She kept it short and sweet with her post, which didn't directly address the incident between her husband and Rock. In it, she simply shared a photo of plain text reading, "This is a season for healing and I'm here for it."

The Academy of Motion Picture Arts and Sciences issued a lengthy statement on Wednesday in which they announced they had "initiated disciplinary proceedings against Mr. Smith for violations of the Academy's Standards of Conduct, including inappropriate physical contact, abusive or threatening behavior, and compromising the integrity of the Academy."

The organization went on to call Smith's action "a deeply shocking, traumatic event to witness in-person and on television," before revealing that Smith was "asked to leave" but "refused."

"Things unfolded in a way we could not have anticipated," the statement concluded. "While we would like to clarify that Mr. Smith was asked to leave the ceremony and refused, we also recognize we could have handled the situation differently."