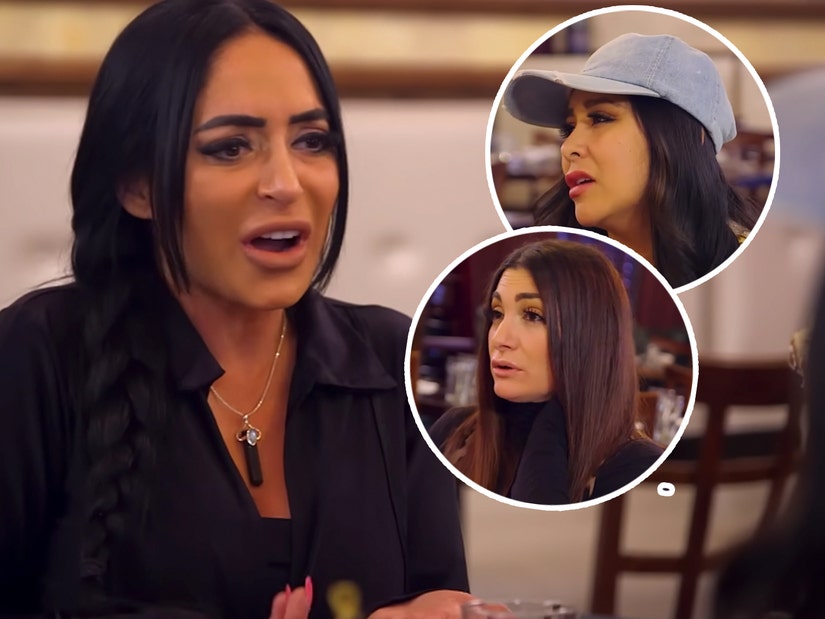 Though Angelina denies the leak, neither Deena or Snooki are buying it.

After Angelina's estranged husband Chris Larangeira told Mike "The Situation" Sorrentino that Angelina was the one who leaked the speech to the press, Sitch relayed that intel to the rest of the cast -- a move which prompted Jenni, Nicole and Deena to call out Pivarnick, hard, on social media.

Going into tonight's episode, Angelina was ticked at both Mike and the trio of ladies. She was angry with Mike for not only speaking with Chris, but stirring the pot by sending his allegations to everyone else -- and the women for taking Chris' claims as fact and not checking with her before blasting her on Twitter, something they previously agreed not to do. 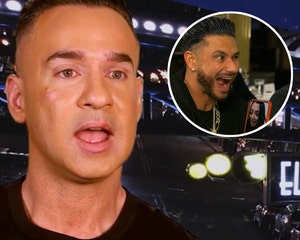 "I don't understand why Mike felt the need to want to contact him or answer his s---. What does it have to do with you?" said Angelina as she spoke with her sister about all the drama. "I did not leak s--- ... the fact they believe what he's saying, it's ridiculous. Instead of having their support, I don't. I'm so f---ing done."

While Mike continued to play dumb as she why she was mad a him, everyone in the cast except Angelina attended a KultureCity charity event. Stewing at home over her alleged lack of invite, Pivarnick fired off a text to Sitch reading, "Mike, you and I need to have a sit down, TOMORROW!"

We'll have to wait until next week to see that meeting, but the request prompted Deena and Snooki to reach out to Angelina to try and smooth things over with her first. Though Snooki hoped Angelina wouldn't be "coming in hot," she did.

"Why are you guys mad?" asked Pivarnick, wasting no time cutting to the chase.

"So, as you know, Mike had talked to Chris or whatever ... and we heard Chris say he has receipts that you were the one that leaked the speech," said Deena. Added Nicole: "When we heard all that stuff from Mike, it brought up a lot of emotions and then we see all these articles happening."

"I was blindsided and then my Twitter's going off, like, what the f--- is this," Pivarnick then told them. "How come you guys didn't text me, 'Hey, Chris is telling Mike that you leaked the speech, is that f---ing true?'"

As Deena admitted "Mike got us riled up," Angelina called him out for "taking the bait" from Chris -- who she said was "literally telling you guys bulls---." The girls, however, made it very clear they still believed the allegations about the speech leak. "You hated us," said Deena, as Nicole added, "You said, 'I'll get the last laugh."

"I know in my heart of hearts that Angelina was so mad at us that she leaked this speech," Snooki said in a confessional. "I would love for her to admit it, but girl, it is what it is. Let's just all move on and never talk about it again."

While Angelina continued to deny, deny, deny, the Meatballs did apologize for taking the drama to social media.

"We're sorry that happened," said Nicole. "We should not have tweeted, that was really immature of us," added Deena, "I take full responsibility for that. I should have been like, 'Did you really f---ing leak the speech?'"

"I would have said, 'F--- that, I didn't leak it,'" said Angelina, something neither of them really believed but didn't want to push back on either. When Ange asked whether Jenni was the one who told them to go after her on social media, they also denied it.

The hour ended with Angelina shifting her anger back to Mike, who she says "stirred this whole f---ing thing up" by running his mouth to everyone in the cast. "It doesn't matter who reached out ... the fact he's taking phone calls from him and spewing it to you guys. Is Mike 'The Situation' a changed man? I don't know anymore."

A preview for next week showed her unloading on Sitch -- and separate shots of Jenni in tears. "Jersey Shore family Vacation" airs Thursdays on MTV. 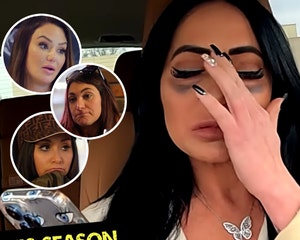