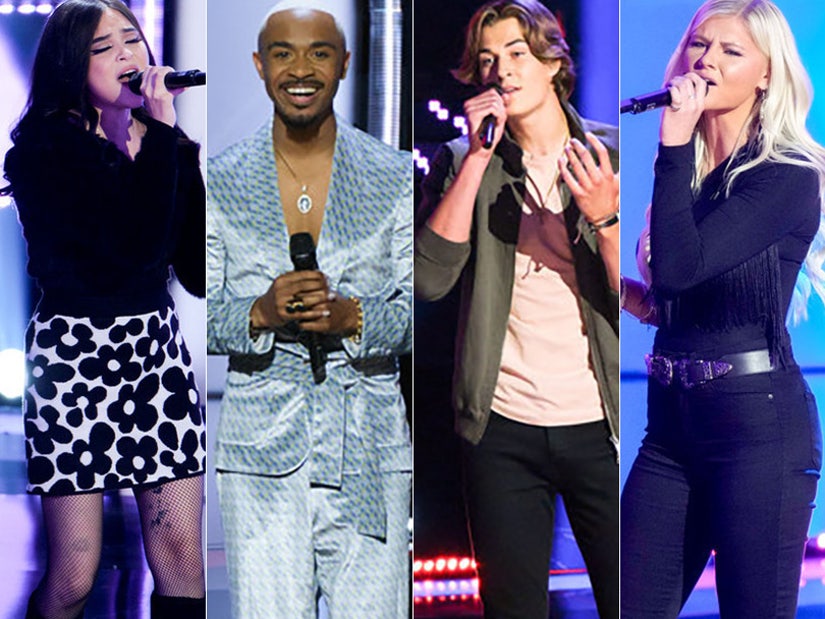 It's a huge risk to sing an artist's song in front of that artist, so two contestants do it -- plus, two huge Blocks leave John Legend and Blake Shelton fuming.

The second night of Blind Auditions on “The Voice” finally saw Blake Shelton land some artists on his team while it also brought out some incredible -- and incredibly young talent.

Not only was there a 6’4” 15-year-old quarterback who just happened to have a secret talent as a great singer, we got a 13-year-old mariachi singer who just charmed the pants off of everyone, and really represented her Mexican heritage proudly on the stage. 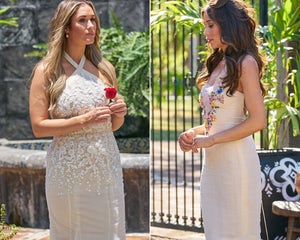 The gloves are definitely coming off more in this second week as two Blocks were used quite effectively. One backfired on the Coach who played it, though they absolutely Blocked the right person, while the other one worked perfectly.

Perched between Blake and Gwen Stefani, Camila Cabello had a front-row seat to their adorable romantic rivalry, while she also took full advantage of her knowledge of the show to keep poking fun at Blake. After all, he is ruthless with everyone and always lying and lying and lying, as he did when he tried to tell the mariachi teen that one Coach wanted her to sing “The Macarena.”

Two artists took the bold move of singing Coach’s songs in front of them, with one singing Blake’s cover of a Conway Twitty classic, while another actually took on No Doubt’s “Don’t Speak,” which is a very singular song by a very singular voice. Did those big gambles pay off? 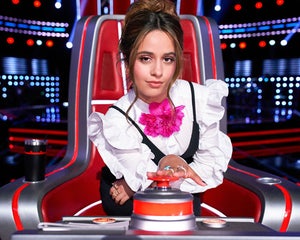 Before we can get to the new Bllind Auditions, we need to resolve the cliffhanger results from Kate Kalvach’s take on “Rainbow” Monday night. Blake, Camila and Gwen were all vying for her choice. Before revealing who she picked, we’ll repost our comments from the performance, as well as video of it below.

(“Rainbow,” Kacey Musgraves - 27, Oklahoma City, OK) It started a little shaky, but Kate found her way into the heart of the song and offered up a really interesting singer-songwriter voice. It was a little warbly at places, though we can guess the not-turning chairs were starting to eat at her as the audition went on and on. At the same time, she really did bring a beautifully serene sound in her voice. There was a tender innocence there that felt so believable. We’re still laughing over Camila trying to make this one point with Blake somehow muting every mic she tries to talk on from her own to Kate’s and even John’s. There are clearly benefits to being the “G.O.A.T.” -- another stunt that backfired horribly. 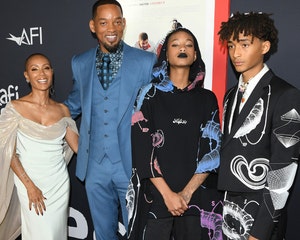 (“I Like It,” DeBarge - 26, Fort Lauderdale, FL) Look, SHEj has a lot of range in her voice and a really nice tone, but she needs to learn how to master her instrument. This was a little all over the place, missing notes throughout. She wasn’t consistent in her vocal presentation, either, making the song sound disjointed as if she wasn’t sure what her approach to it was going to be from moment to moment. She certainly gave it her all, but it was just too much sloppy in too many places.

(“Cielito Lindo,” Quirino Mendoza y Cortés - 13, San Tan Valley, AZ) Reina went with traditional mariachi music, which immediately got Camila’s attention. We’ll give her extra credit for being able to stay focused as both Camila and Gwen started dancing in front of her -- and trying to get in front of one another. She has a very young voice, but it’s rich and powerful on this traditional sound. What else she can do is a huge mystery, but she definitely had total command of this from start to finish, bringing authenticity and a really lovely tone to the stage. She did say she also sings country and pop, so it should be interesting to see what else she has.

(“About Damn Time,” Lizzo - 31, Mobile, AL) As the song progressed and no chairs were turning, Koko started trying harder and harder, losing the charm of how it started with runs and vocal pushes to try and will a chair to turn. We thought she showed a lot of potential in her range and the different qualities she brought to a very difficult song choice, but there were some pitch issues and overall inconsistencies. That said, we heard enough we’d have liked to see her continue and do something else because she’s got a great instrument. Her performance had Camila pitching the idea of a Regret Button that could be hit just once to give an artist a second chance (we think it’s a great idea). 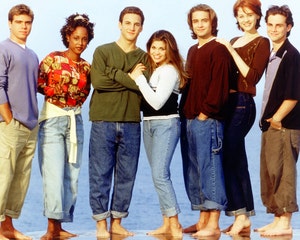 (“Don’t Speak,” No Doubt - 19, Fresno, CA) Alyssa sounded great on the opening lines of this one, which is when she got chairs to turn, but we were less enamored when she tried to get into the grit of the chorus and just didn’t have the power behind her voice that she needed to really sell that emotion -- even though she’d already expressed that she felt connected to them. It’s a young singer with a young voice that has learning and growing to do -- so we’ll see if she can do that in a hurry on the show.

(“Stupid Boy,” Keith Urban - 25, Bath MI) Crippled throughout most of her life by stage fright, Sadie took a huge step forward just by even agreeing to be part of the show. The coaches made her wait this one out, and you could hear the nerves in her voice, but she has a really great storytelling quality to it that made us believe what she was singing. That’s so key in country music. She has this natural charm that you can hear in her voice, almost an unexpected innocence that added a sweetness to the performance.

In a very sweet moment, even though Camila was out of the running as a Coach, she shared her own issues with stage fright before she auditioned for “The X Factor,” and offered to help Sadie throughout this journey in that aspect, which just says a lot about Camila’s heart.

(“Heat Waves,” Glass Animals - 28, Queens, NY) Devix has a sweet quality to his voice and a pleasant tone, but he chose a song with a lot of character and not a lot of variation, meaning we only really got to experience one level of his talent for about half of this performance. When he finally -- finally! -- kicked it into gear and started showing a little bit more of himself, a hint of falsetto, and some much-needed passion, he started getting chairs to turn. In the end, it was a well-rounded performance. 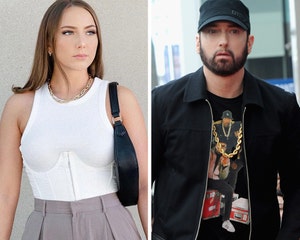 (“This Town,” Niall Horan - 15, Grass Lake, MI) Camila talked Blake into going for Brayden, which was definitely a huge moment for the towering teen. He has a sweet innocence in his voice. You can hear not only his youthfulness, but his relative inexperience as a singer and performer (he has one move and that’s to hold his hand up while he sings). But he’s so young and with a lot of natural talent, which means he can only go up from here. This confidence booster should do a lot. What mattered most was that he sounded earnest and sincere on this track, which is how you sell the story.

(“Just the Two of Us,” Grover Washington Jr. f. Bill Withers - 22, Chester, PA) He’s got an impressive instrument with a lot of different toys in there to play with, but he definitely needs to learn how and when to best utilize them. What works is that he’s already said he’s open to guidance to better learn what he’s fully capable of. This was a perfect audition to feature a nice, classic rhythm and groove, which he settled into nicely, but he put some little modern touches to it to make it feel fresh and updated, suggesting a creative musicality, as well.

(“Goodbye Time,” Conway Twitty [as performed by Blake Shelton] - 22, Woodstock, GA) With a beautifully tender sound and an authentically country tone, Bryce attacked this classic song as if it had been written by or for him. He had such a classic sound, too, that if you heard that on the radio you might not even be sure in what era it was released. It’s a smooth, effortless voice that shines both in its tender pocket and when it's stretching up (just a bit) to nail a powerful higher note. He definitely knows his instrument. 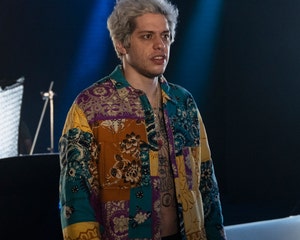 (“Can’t You See,” The Marshall Tucker Band - 25, Cleveland, MS) Peyton absolutely nailed that Southern Rock vibe with a lot of gravel in his voice and a really full-throated sound through this classic rock performance. He looked and felt like an old soul up there, just nailing the energy of the song and really living in the moment. That authenticity in his voice really sets him up for a pretty good range of songs in a wide array of genres, and the fact that he can approach a song nearly twice as old as he is as if it’s his own says a lot about his artistry and understanding of himself and music. He proved how much he can do when he sang a bit of John’s “All of Me.”

(“Isn’t She Lovely,” Stevie Wonder - 28, Dallas, TX) You don’t take on Stevie Wonder unless you have the confidence to handle his rapidly changing cadences, intricate vocal arrangements and absolutely bonkers range. From the first note, Kevin made it clear that he has the range and with the control he displayed, chairs turned quicker than a key change. We did have to kind of crack up that part of Gwen’s super-fast chair turn was so that she could block John, which left John salty -- but the tactic made perfect sense. He really is the total package as a singer and performer. 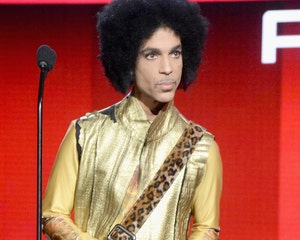 "The Voice" continues Mondays and Tuesdays at 8 p.m. ET on NBC.