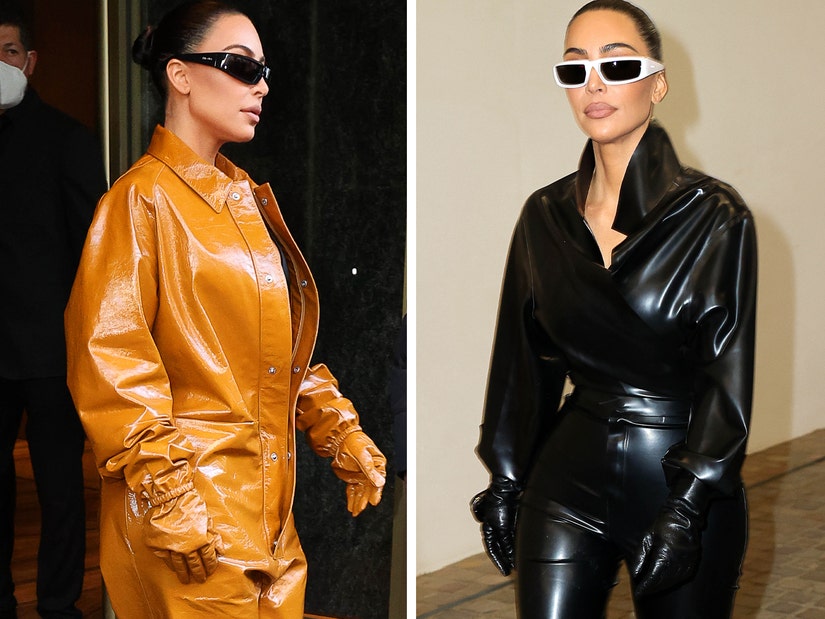 "Would have went to jail before I went out in that."

Kim Kardashian took Milan by storm back in February, as she supported sister Kendall Jenner walking in the Prada show at the time. And while she was feeling her looks, her estranged husband Kanye West was not.

On the latest episode of "The Kardashians," Kim rocked head-to-toe Prada while in Italy -- stepping out in a number of leather looks that were published by outlets all over the world (above). West, it seems, saw a few of them himself -- and apparently made it known he wasn't really a fan.

Reading some of his alleged texts aloud to her glam squad, Kardashian said, "No white glasses. Make security wear black gloves. The orange look made me so mad, would have went to jail before I went out in that."

"While we're here in Milan, Kanye has the kids at home and he can't help himself," Kim said in a light-hearted confessional after reading his messages. "We can laugh about things we like or don't like. No matter how crazy things are sometimes, we're always going to be family."

"I'll text him back and be like, 'You have been wearing those boots for a long time, so when you're ready to change your outfit, let me know, and then you can have advice on mine,'" she added of her replies.

It's not the first time West has criticized her fashion choices since the two split, as Kim stepped out on her own and stopped having him style her. In the Hulu show's first season earlier this year, he compared her to Marge Simpson and said her "career's over" after she styled herself at a major event post-split.

At the time she filmed this most recent episode, Kardashian was still dating Pete Davidson and opened up a little bit about their relationship as well as she shopped for a gift for him in Milan.

"Pete has the best heart. I feel like people have this idea about him, that he dates all these hot girls," she said. "He does, but he's just like the sweetest, most thoughtful person."

She also said she couldn't believe he was planning to go to space on one of Jeff Bezos' Blue Origin rockets, calling it "such a scary concept to me."

Kardashian explained to her friends that she was afraid the rocket would blow up, recalling how it felt to watch the Challenger explode back in 1986.

"After talking to Bezos about it and how safe it is, and all the testing and everything they do, I felt comfortable with him going," she added. "I was like, 'Okay, if I didn't have four kids, I would absolutely go.'"

Davidson, however, didn't end up going to space after all -- with a spokesperson for the company simply saying he was "no longer able to join" to mission.