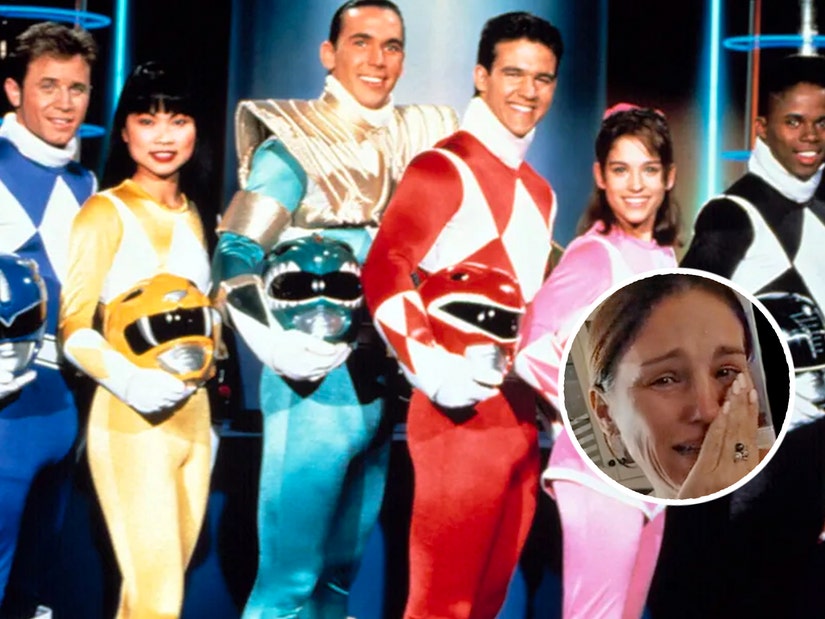 Amy Jo Johnson broke down in tears as she shared a raw tribute to her late costar.

The Power Rangers are saying farewell to a valued member of their squad.

Jason David Frank's "Mighty Morphin Power Rangers" paid tribute to the late actor after TMZ reported that Frank died at age 49 on Nov. 20. The outlet's sources claim that cause of death was suicide.

Original Pink Power Ranger Amy Jo Johnson shared a throwback selfie of herself and Frank at a fan convention to Instagram, where she lovingly addressed the late actor with a personal nickname.

"Jase, you were beautiful and truly unique," Johnson wrote. "My life just won't be the same without your frenetic, hilarious, caring, driven and creative ball of energy. I will always love you, dear friend. Please Rest now In Peace..."

On Monday, she also shared a lengthy video tribute, in which she broke down in tears over his passing.

"I thought I'd come on here and just say hi. Just thinking about Jason a lot and I hope you guys are okay," she said, wiping away tears. "I know how much you all meant to him and it's just so sad today. It's really sad. And I know all of you are so sad. It just really stinks, right? It sucks. It just really sucks."

"I hope anybody out there who's feeling depressed or sad or lost or like there's no other way, just know that there is and please reach out for help," she continued. "It's not the way."

She then sang an emotional song dedicated to him, saying he was always a fan of her singing.

"He was always such a force and such a bright, bright, crazy, wild, funny light," she added, before another song. "I just can't even believe it."

"I know how much you all meant to Jason, and it sucks," she concluded. "But we're all going to be okay."

Walter Jones, known for his role as Black Ranger in MMPR, honored Frank in a statement shared to TMZ, saying "He was an inspiration to so many people. His presence will be dearly missed. It’s so sad to lose another member of our Ranger family."

He added, "Jason was one of the biggest pranksters on the show. He had a wild sense of humor. We had our shares of ups and downs but I stayed consistent about being an ear if he needed one. My prayers go out to his family and all that will miss him."

Jones also took to Instagram to post a group photo of the cast, where he wrote he was "sad to have lost another member of our special family."

David Yost, who played the Blue Ranger, shared a collection of photos to his Instagram page as well.

"We must not allow the clock and the calendar to blind us to the fact that each moment of life is a miracle and a mystery. - HG Wells," he began his tribute. "My complicated friend. You had my heart on day one. So intelligent, so funny, so energetic. A light so bright, a force like no other. You shaped & transformed so many lives. I know you can now see the truth of the glory that is you. Thank you, thank you, thank you."

On Yost's comment, Jones added, "You had a friendship that was admirable. Sorry for the loss you must feel."

Red Ranger Austin St. John also shared a tribute, writing: "'Once a ranger, always a ranger' thoughts and prayers..." he captioned a photo of the pair. "#RIP #prayers."

Frank was best known for playing Tommy Oliver in the original "Mighty Morphin Power Rangers" franchise, which debuted in 1993. He began as a Green Ranger in Season 1 and was introduced as an antagonist before joining the group and eventually becoming the White Ranger.

He was also a regular on the convention circuit and beloved by the show's legion of fans.