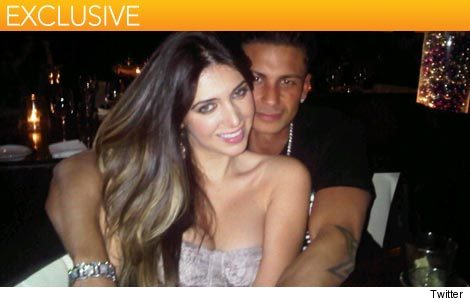 "She's a great girl, she's an awesome friend," he tells TooFab. "We're not dating, but she's definitely a cool girl."

In response to an item in "The New York Post" earlier this week claiming that Gastineau, who designs the jewelry line Tres Glam, had "moved on" from Olympic swimmer Michael Phelps to Pauly D, he tells TooFab, "I don't know where they got the idea from, but she's definitely a friend of mine, that's probably why."

And on Wednesday, both Gastineau and Pauly D teased their Twitter followers about the dating buzz. He tweeted at her, "Babe Are We Dating?" Her response? "hahahahhahahahahah." Then, several hours later, she tweeted a photo of them at dinner, writing "lookey lookey," to which he responded, "Sheee's Dopeeee!!!"

Ronnie and The Situation Bond Over Rehab on Jersey Shore: Family Vacation

Ronnie Calls The Situation an 'Inspiration' As They Bond Over Rehab on Jersey Shore:…

Nikki Bella on Artem Chigvintsev Losing His DWTS Job, 'Freaking Out' Over Quick…