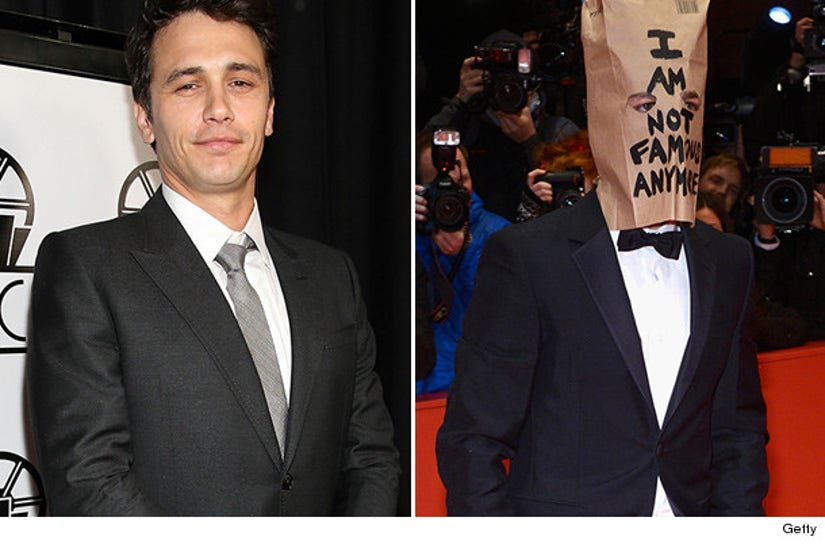 Shia LaBeouf has one actor in his corner: James Franco!

Titled, "Why Actors Act Out," James looks at some of the recent headline making antics of the "Transformers" star.

Shia infamously attended the red carpet for the premiere of "Nymphomaniac" wearing a paper bag over his head that read "I'm not famous anymore" earlier this year. Shortly after, he held an open exhibit in Los Angeles called "#IAmSorry" where the young star broke down in tears, wearing a similar headpiece.

"This behavior could be a sign of many things, from a nervous breakdown to mere youthful recklessness," Franco writes. "For Mr. LaBeouf's sake I hope it is nothing serious. Indeed I hope — and, yes, I know that this idea has pretentious or just plain ridiculous overtones — that his actions are intended as a piece of performance art, one in which a young man in a very public profession tries to reclaim his public persona."

Child stars often have a hard time dealing with the spotlight, especially once their star power starts to diminish. Shia has been in showbiz since he was just a kid, and found fame starring on the hit Disney series "Even Stevens."

"At times I have felt the need to dissociate myself from my work and public image," James reveals. "As an actor, you are often in the uncomfortable position of being the most visible part of a project while having the least amount of say over its final form."

The "This is the End Star" also says that many artists feel the same tug-of-war between their public persona and personal self, which likewise causes actors to act out against the media when their "trivial" daily behaviors become magnified under the looking glass of the press.

This same type of behavior Franco believes is "addicting." "Participating in this call and response is a kind of critique, a way to show up the media by allowing their oversize responses to essentially trivial actions to reveal the emptiness of their raison d'être. Believe me, this game of peek-a-boo can be very addictive."

Franco ends the article with the belief that Shia's bizarre behavior really is an artistic act, and not a breakdown of sorts.

"I think Mr. LaBeouf's project, if it is a project, is a worthy one. I just hope that he is careful not to use up all the good will he has gained as an actor in order to show us that he is an artist," he says.

We're not sure what Shia's end-game plan is -- but if it is just an act, he's doing a damn good job. What do you think about Franco's assessment? Tell toofab in the comment section below!

Make sure to check out nytimes.com for Franco's full article.