The screams of terror from Stefanie Scott and Hayley Kiyoko in "Insidious: Chapter 3" are the real deal.

The two star in the upcoming horror prequel, which explains how psychic medium Elise (Lin Shaye) and her team of ghost hunters first formed over a supernatural entity haunting a teenage girl.

The girl in question: Scott's character, Quinn, who thinks she's communicating with her dead mother ... but, in reality, has contacted something far more sinister.

"I loved it, it was really intense," Scott tells toofab's Brian Particelli about working on the set of such a freaky flick. "I'm really into the dark world of horror."

The two actresses were cast in the film right after finishing production on "Jem in the Holograms" (they both play members of the title band) -- and their camaraderie from that project bled over into the casting decision.

"[Hayley] was with me the day that I had my final callback and I was like 'I'm really excited, there's this part for you, get in on it,'" Stefanie explains. "[Director Leigh Whannell] was talking to me after he saw her read and was like 'I think we wanna cast her, you guys have such good chemistry.' I was like 'You should totally cast her, she's so cool.'"

The rest, is history. 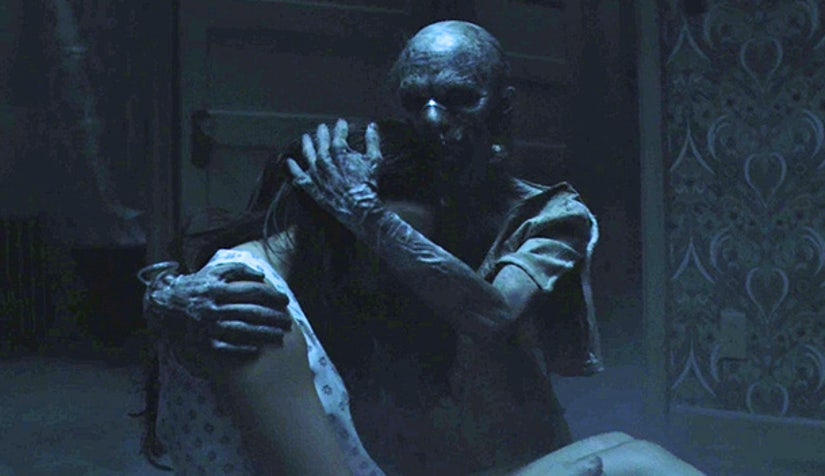 And while it was great to have a familiar face on set, it wasn't all sunshine and rainbows for them. The director went out of his way to scare as many of the film's stars as possible -- and didn't let Scott see the film's nightmare-inducing villain, The Man Who Can't Breathe (above), until he yelled "Action."

"The first time I saw him was when he was scaring me," she explains. "At rehearsal, he wasn't there. Leigh kept everything a secret. If there was someone that was supposed to scare me, he loved to not have them here all day until we're doing the scene."

"There was an air horn," she also adds. "He locked me in a closet. He jumped out of a closet. He did a lot of things. It was quite the six week journey for me. I needed like the biggest nap ever. It was scary."

Check out the video above to see what Hayley had to say about her first interaction with The Man Who Can't Breathe ... and find out how the cast bonded over "The Shining."